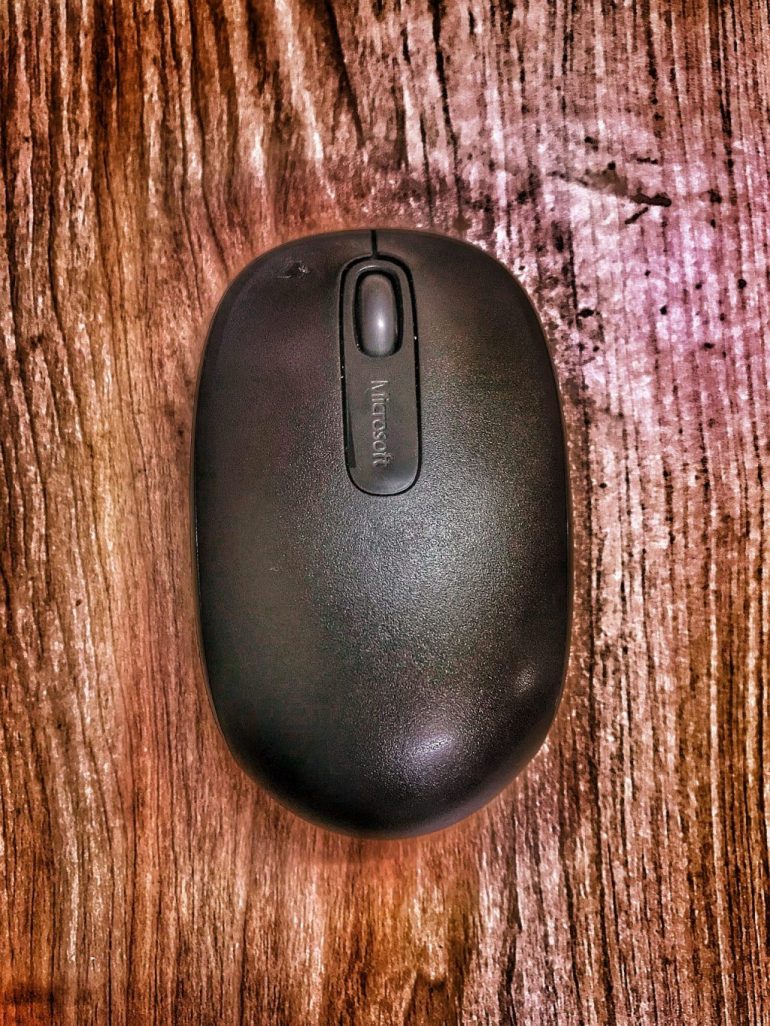 I’ve been using this mouse for quite some time now. My dad bought this for me along with an HP Core i3 laptop back in early 2017. The only words that I have for this mouse is that it’s fantastic.

Microsoft has been around in the tech industry for a long time now, and no matter it has stopped innovating much, it has devices that were launched in the past that outperform products even today. Last year, when I felt an urgent need to get a laptop, my dad decided by himself to buy a Microsoft wireless mouse, just so I could perform tasks that I usually perform on my desktop without much of a hassle. He told me that when he was looking for options regarding a wireless mouse, just the brand label ‘Microsoft’ made him buy one, even though there was a Razer wireless mouse lying just beside it.

When he handed over the brand new mouse to me, it was gift wrapped. As soon as I unwrapped it, he noticed a frown on my face. Upon being asked, I replied based on my assumptions and the market figure of Microsoft that he had made a mistake and shouldn’t have bought this. He told me to keep it for now and that he’ll bring a better one later. So, that’s how this mouse ended up in my list of daily-usage stuff.

Though, this mouse has been the best thing that’s ever happened to me since I slammed my old mouse on the wall. See, I’m not a big fan of computer peripherals, but if given one to me, I can make the most use out of it. So, this is my review of the Microsoft wireless mouse. Tune in! 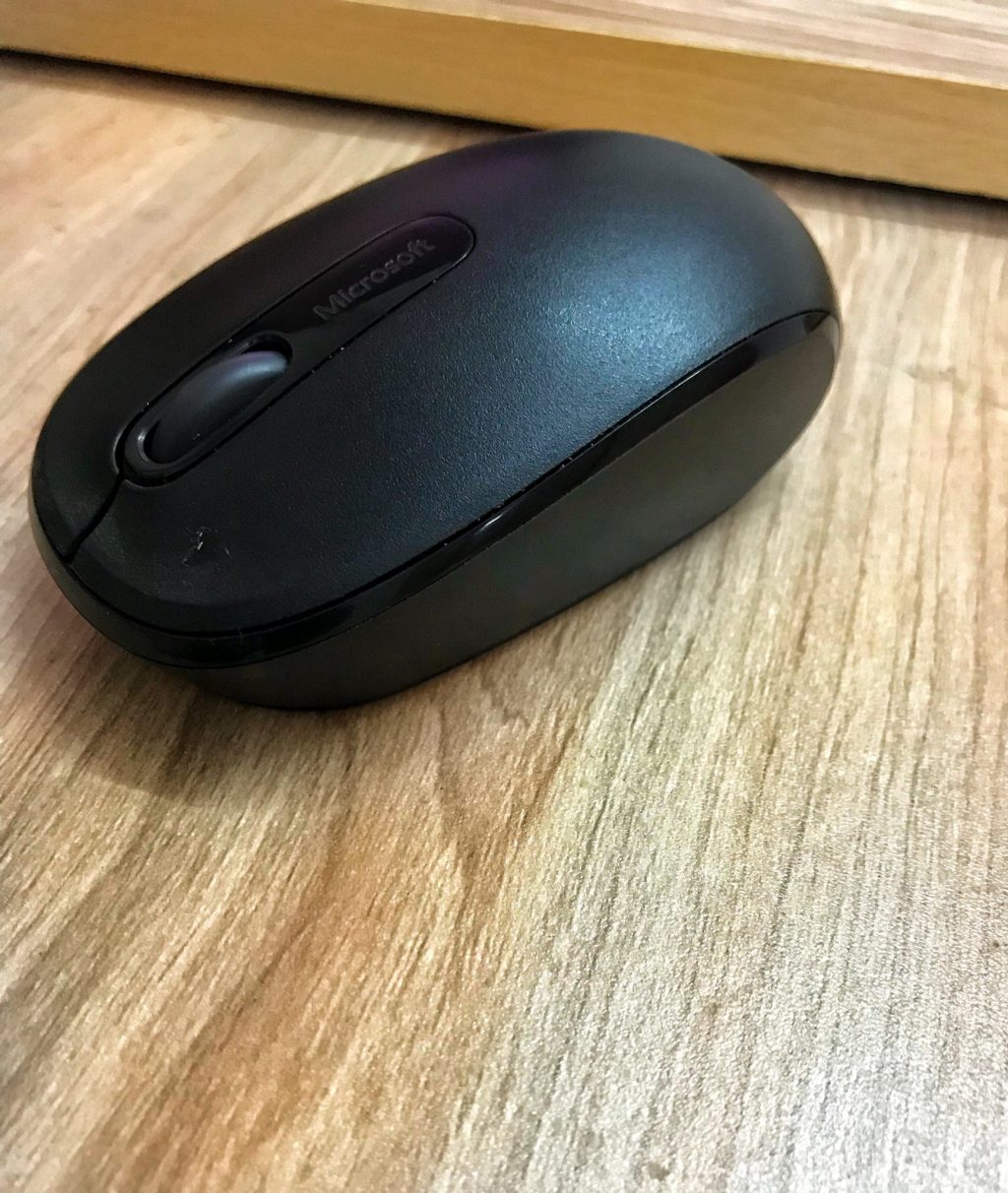 The Microsoft Wireless mouse does not have a high-end design and is definitely not going to be pleasant to your eyes as your first interaction with the mouse. It looks pretty basic and is quite heavy if you ever try to hold it in your hand. The one which I own has a matte black color that is a huge fingerprint magnet. Above all, if you accidentally manage to touch this mouse with oily hands, be prepared with a cloth to rub the oil off cause it does not wipe off during normal usage.

Even though I don’t acknowledge its design that much, I feel the streamlined flow starting from the buttons to the rear of the mouse looks and feels kinda pleasant. It seems as if the original Microsoft mouse from the 90’s has been redesigned and cultivated to make it look more modern. The mouse still has that old character to it! And maybe it’s the reason I’ve decided to stick on to it.

This mouse connects to any PC that has a USB port using the nano transceiver it comes with. The nano transceiver looks like a smaller version of a regular USB. To handle it efficiently, the mouse has an additional compartment for it alongside the battery slot where you can tuck it in easily. As for me, I haven’t felt the need to place the transceiver back in the mouse even for once. I just leave it plugged into my desktop at all times. I don’t know whether that is good for the life of it, but I feel that it’s the right thing to do. 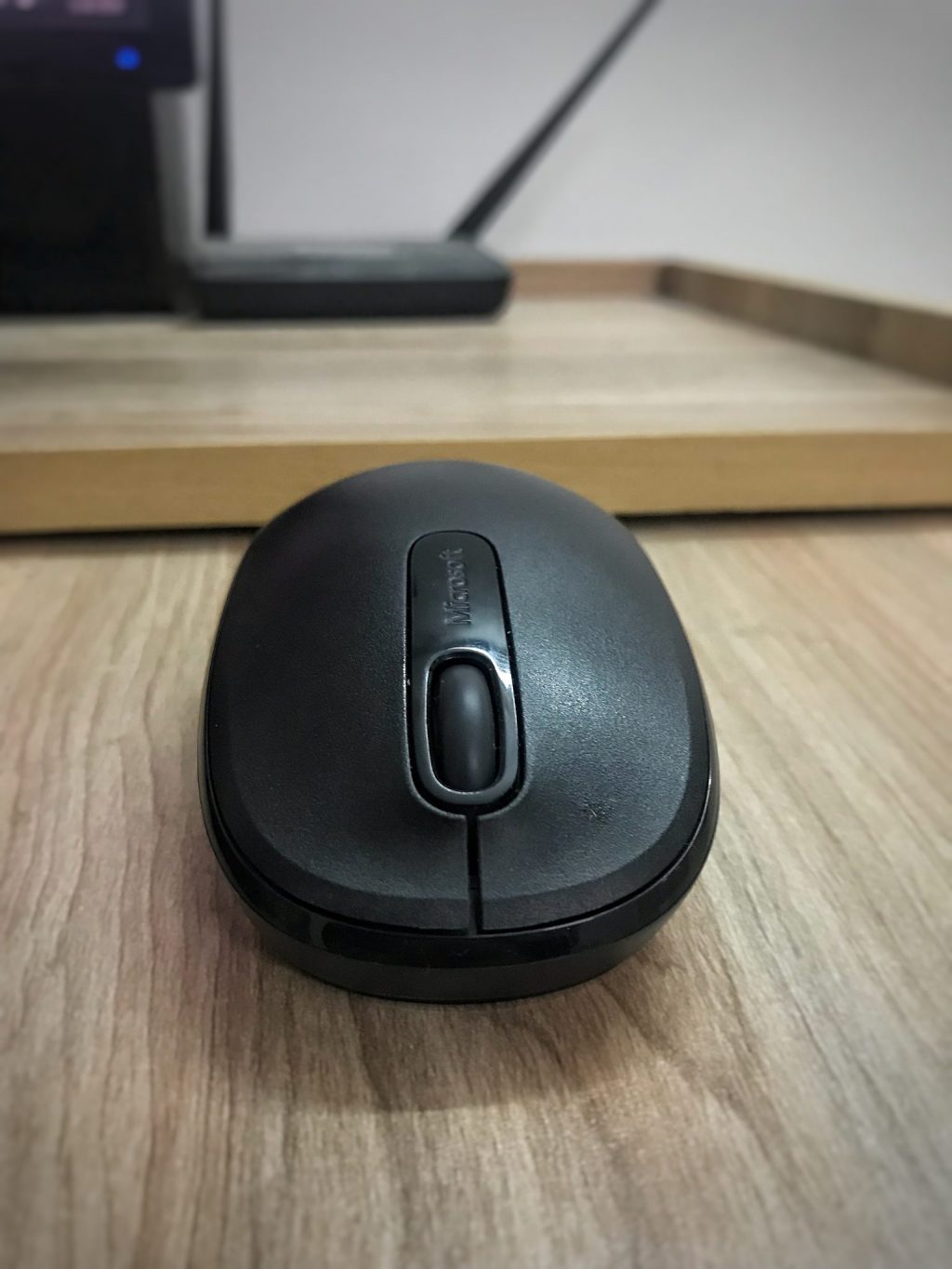 The mouse has a battery life of at least 6 months, which is as prescribed by Microsoft. It uses a ‘double-A’ battery in it. Though, It has been over 6 months since I first started using this mouse and I haven’t yet felt the need to open the battery compartment. Clearly, Microsoft’s has done a pretty good job in terms of battery management.

So far the performance of this mouse has been spot on. I’m not a big gaming geek, but I can say that the mouse doesn’t at all have lagging issues, like most of them have. It seems like it has the internals of a gaming mouse, but the design of a regular one.

Being an optical mouse, it doesn’t support many surfaces I try to use it on. For an instance, I tried using this mouse on a wooden desk, but it got all screechy and I had to move the mouse twice to just shrug the cursor on the screen. That’s the only downside of optical mouses. I know it doesn’t do well on most surfaces, but if you have a good mousepad or even a cotton cloth, it can work spectacularly fine. 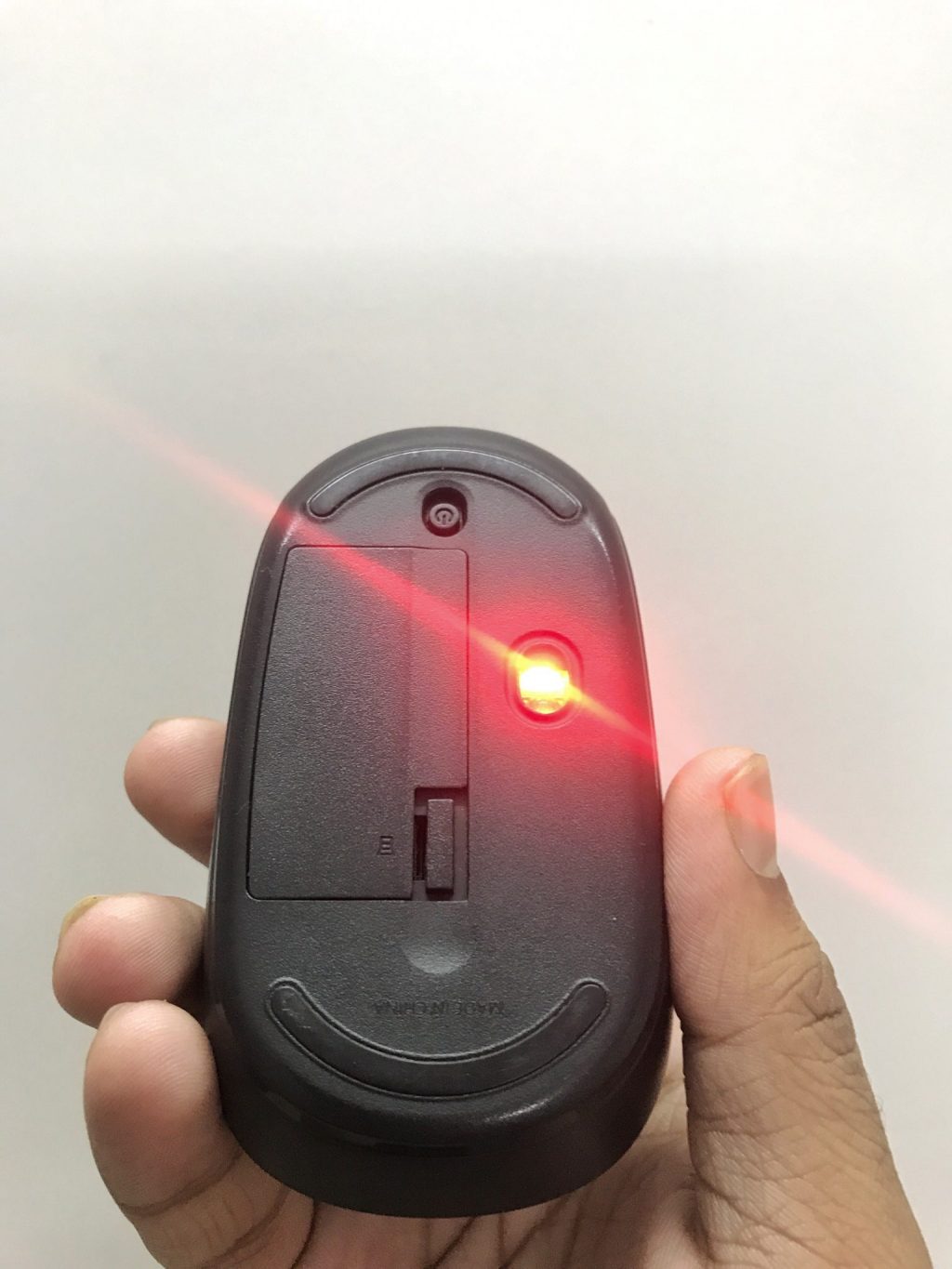 Although, this little mouse does not support Macbooks or iMacs and is only compatible with windows. At least that’s what is displayed on Amazon’s product page. But, users have reported that it operates flawlessly on MacBooks as well. Why wouldn’t it, as it just needs a USB connection to a power source, which in our case is a MacBook. Rest is all managed over a 2.4 GHz radio frequency.

The Microsoft Wireless mouse is 6 centimeters tall and 12.5 centimeters wide so it fits extremely well in small hands as well as in big hands. But, it is a pleasure if you have medium sized hands just like me. While it’s not ergonomically composed, your hands can automatically learn over time to take the shape of the mouse. 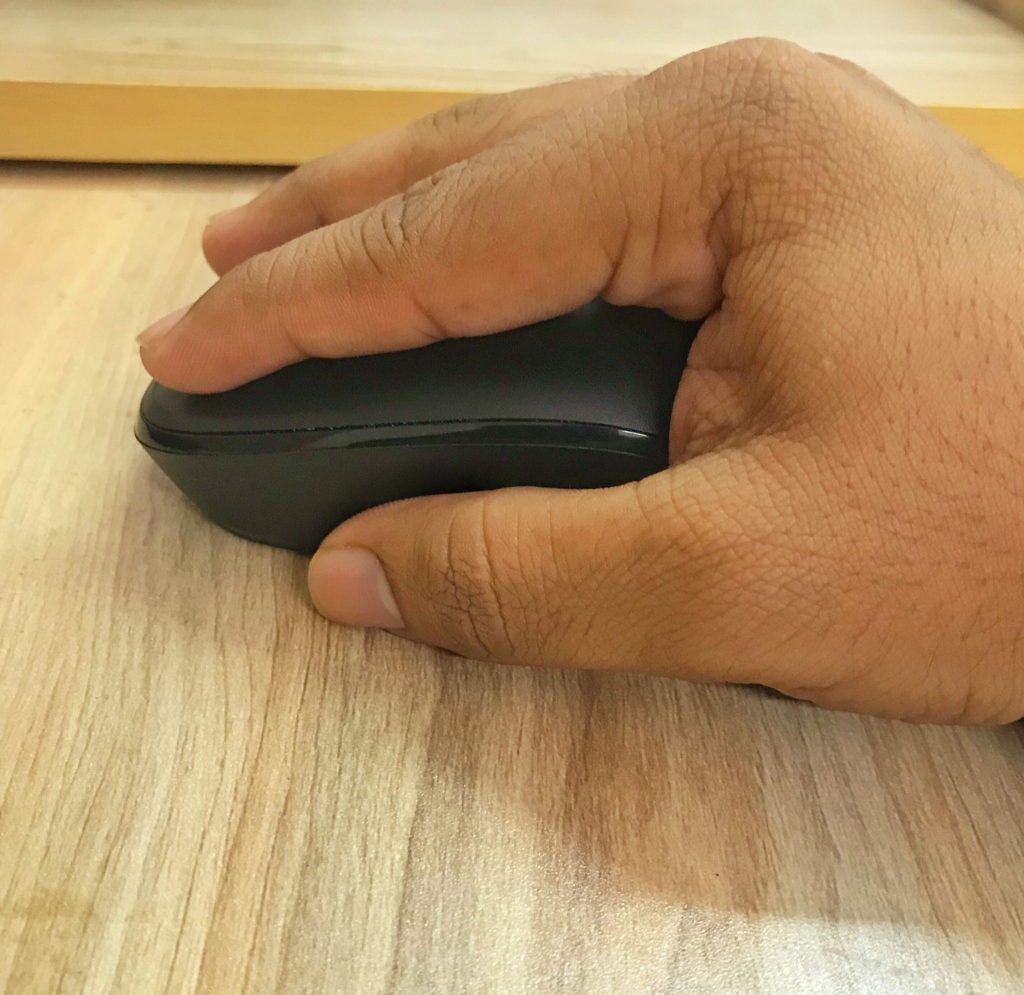 Although, its bulging end is kind of a bugger as it feels uncomfortable after some time and hurts the middle area of your palm. It weighs in at 150 grams which is almost similar to an iPhone 7, but still with a shape of a mouse, it feels heavy to the hands. Additionally, the buttons are perfectly clicky. Again, not as good as you would get on a gaming mouse, but you can live your life with it. The roller is also smooth but it gets rough sometimes due to unknown reasons. But, as I said before, you can live with it.

As far as durability is concerned, Microsoft has done a pretty good job on this one. I have a sliding desk which kind of slants outwards when I open it which most of the times causes the mouse to fall down. Also, the carpet is almost 1 meter away from my desk, so the mouse has a solid fall on the ground below. But, I haven’t yet noticed a single scratch let alone a debilitated piece.

It is an amazing mouse if you are looking for a budget. Although, I won’t recommend this to users who have used a gaming mouse or a laser focus mouse before as it would feel extremely subjugated. It is pretty comfortable for regular sized hands and is pretty durable as well.

And just because of its immense durability and the number of times it has worked for me, I can say that this mouse could be the best for you. It’s a new definition of reliability as a whole. Microsoft has done a pretty good job here. Keep it up!

Check out some more such awesome posts from The 8-Bit:

The best apps to look forward to in 2018

All you need to know about Apple’s smart speaker, the Homepod

This is the reason iPhone processors are faster than Android processors

What’s on my iPhone? Episode 1

Do parallel universes exist? Here’s what you need to know!