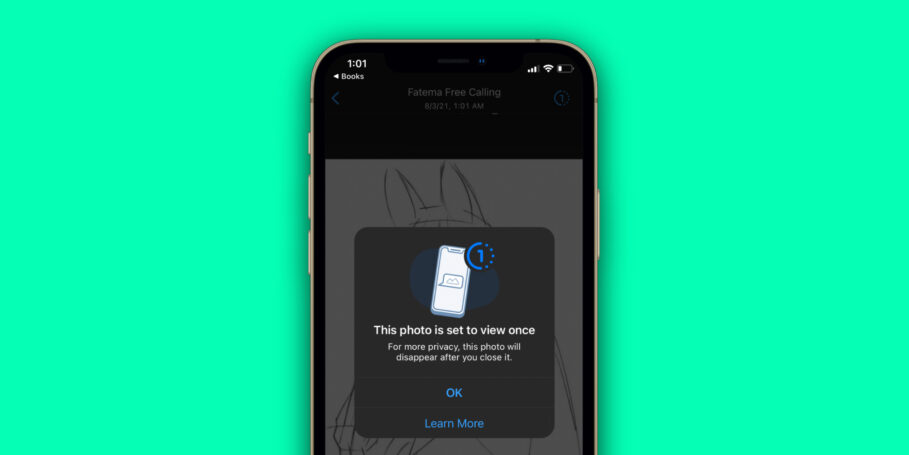 This feature is now officially available in version 2.21.150 of WhatsApp on the iOS App Store only in certain countries including India and Indonesia. The release notes for this update, however, state that this update will “roll out over the coming weeks” meaning not everyone will be able to get their hands on the new disappearing photos and videos feature right away.

WhatsApp later confirmed in a blog post that it’s releasing disappearing photos and videos to “everyone starting this week.”

The concept of disappearing photos and videos is simple enough on WhatsApp, much like Instagram’s ability to send disappearing media. The update introduces a new button while sending a photo via WhatsApp that lets you convert a regular photo or video into a disappearing one.

When you press the button—placed just beside the blue Send button—for the first time, it displays a prompt informing you about the nature of disappearing photos. When the recipient opens a disappearing photo once and closes it, it’s instantly rendered inaccessible.

Of course, the recipient can always take a screenshot of the photo before it disappears. Unfortunately yet, WhatsApp hasn’t implemented screenshot detection and reportedly isn’t planning on doing so.

When the photo is viewed once, it remains in the chat with a residual “Opened” label. As expected, tapping it does nothing. Moreover, it’s worth noting that the feature works just as well with groups as with individual chats.

As for the diversity of options related to the disappearing photos and videos feature, there isn’t much to it. You cannot set the photo or video to be viewed more than once as other social messaging platforms allow.

Apart from the disappearing messages feature, WhatsApp’s iOS version 2.21.150 claims to bring a simple change in how the in-app notifications look, which appears to be rolling out to a wider set of countries including the US.

They now have rounded edges bent to a greater degree and appear more in line with the rest of the user interface taking into account the rounded chat bubbles.

This isn’t the first time the Facebook-owned messaging app has dabbled in ephemeral content. Its disappearing messages feature is an interesting way to secure your conversations and make sure they aren’t used against you in the future.

If you’ve got a chance to use the new disappearing photos and videos feature, we would love to hear about your experience in the comments section below.

Update (4th Aug, 11:50 PM P.T.): Added a link to a WhatsApp blog post confirming the feature and that it’s coming to everyone.