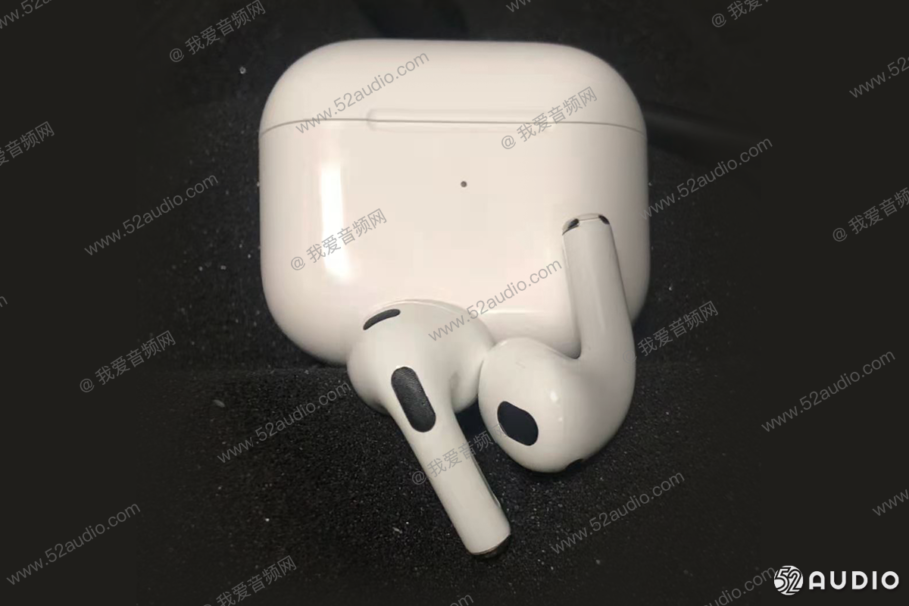 An image of the purported AirPods 3 has emerged offering a detailed outlook of the upcoming base-level AirPods. Shared by 52Audio, the image apparently showcases how the AirPods 3 and its case look like.

While the source also recently shared fake x-rays claiming to be that of the upcoming AirPods, the latest image seems to be genuine as it lines up with the description of the AirPods 3, recently reported by Bloomberg.

The Bloomberg report described the AirPods 3 as having a shorter stem and silicone ear tips similar to the current-gen AirPods Pro. The 52Audio report accompanying the image suggests the third-gen AirPods may support Active Noise Cancellation, whereas Bloomberg states otherwise.

The AirPods in question reportedly won’t feature any of the high-end features implemented in the AirPods Pro including Active Noise Cancelation and Transparency Modes.

Today’s report, however, claims that the implementation of Spatial Audio Support for the third-gen AirPods is “highly” probable.

Another claim that today’s report introduces that contradicts Bloomberg’s reporting is the battery life of the upcoming AirPods, which is being claimed to be five hours; the same as that of the second-generation AirPods. The Bloomberg report, however, states that battery life will improve over the current limit.

Apart from the shorter stem and silicone tips, the leaked image revealed today also suggests that the new AirPods will purportedly have a flat indentation on its stems for better touch controls, similar to the AirPods Pro.

If that becomes the case ultimately, the new AirPods will offer improved touch controls as compared to the single and double-tap controls on the current-gen AirPods.

As for the new AirPods case, it seems to be closer to the AirPods Pro case in appearance, while also being slightly minimized in breadth.

Today’s report also states that the new AirPods will ship with a pressure-relieving system intended towards equalizing pressure within your ears so as to avoid any discomfort while wearing the AirPods. The same system is already present in the current-gen AirPods Pro.

These AirPods’ exact release date is uncertain as of yet. The 52Audio report suggests beginning of March. Renowned Apple analyst Ming-Chi Kuo has also reported earlier that the new AirPods will begin production in the first half of 2021.

Recently, Mark Gurman discarded rumors of Apple hosting an event on March 16. Although, it still validates the possibility that an event could take place on another date in March.

There’s a chance Apple might skip the event altogether and launch the products—including a new iPad Pro, Third-gen AirPods, and AirTags—via a press release.

Let us know what you think in the comments section below.