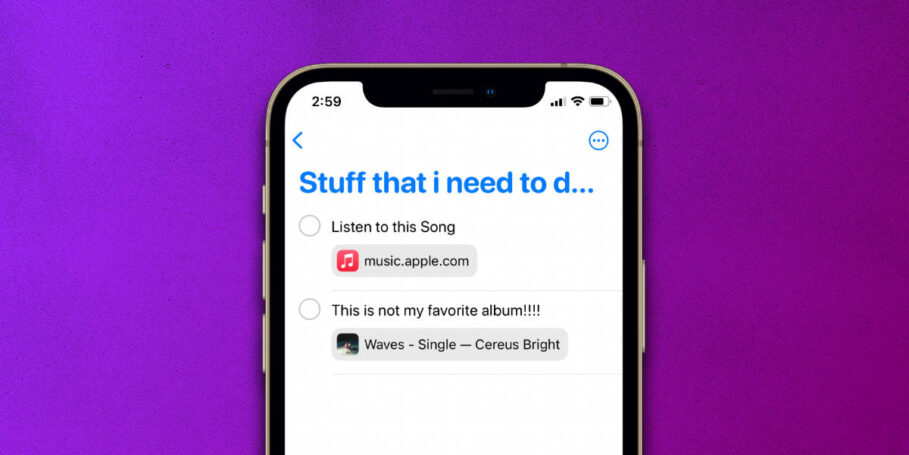 iOS 14.5 has finally added a feature that has been in-demand for a long time—the ability to set reminders for Apple Music tracks. Now, while listening to a track on Apple Music, the share sheet shows the Reminder app’s icon whereas it didn’t previously.

A user can then tap on the Reminder icon to create a new reminder with the track. The track will appear within Reminders in the form of a native Apple Music card which is visually appealing and distinguishes it from other reminders. The Apple Music card includes the cover art for the track or album alongside its name. However, in my experience, some songs appeared with a simple Apple Music logo and the text “music.apple.com” which made it difficult to recognize right away the track I’d saved as a reminder.

It’s unclear as to why Apple did not include this simple functionality until now. There are many scenarios in which setting a Reminder for an Apple Music track is useful. One such scenario is when you listen to a track playing somewhere and you decide you want to listen to it later that night.

That said, here’s how to set Reminders for Apple Music albums and tracks:

How to set Reminders for Apple Music Albums and Tracks

It’s worth noting that this feature is only available in iOS 14.5, meaning iPhones or iPads running earlier versions might not see it on their devices. In order to take advantage of it, you will need to upgrade to iOS 14.5.

Besides, there are a lot of reasons you should upgrade.

Apple Music also recently added the ability of notifying you when an artist releases a new track or album.