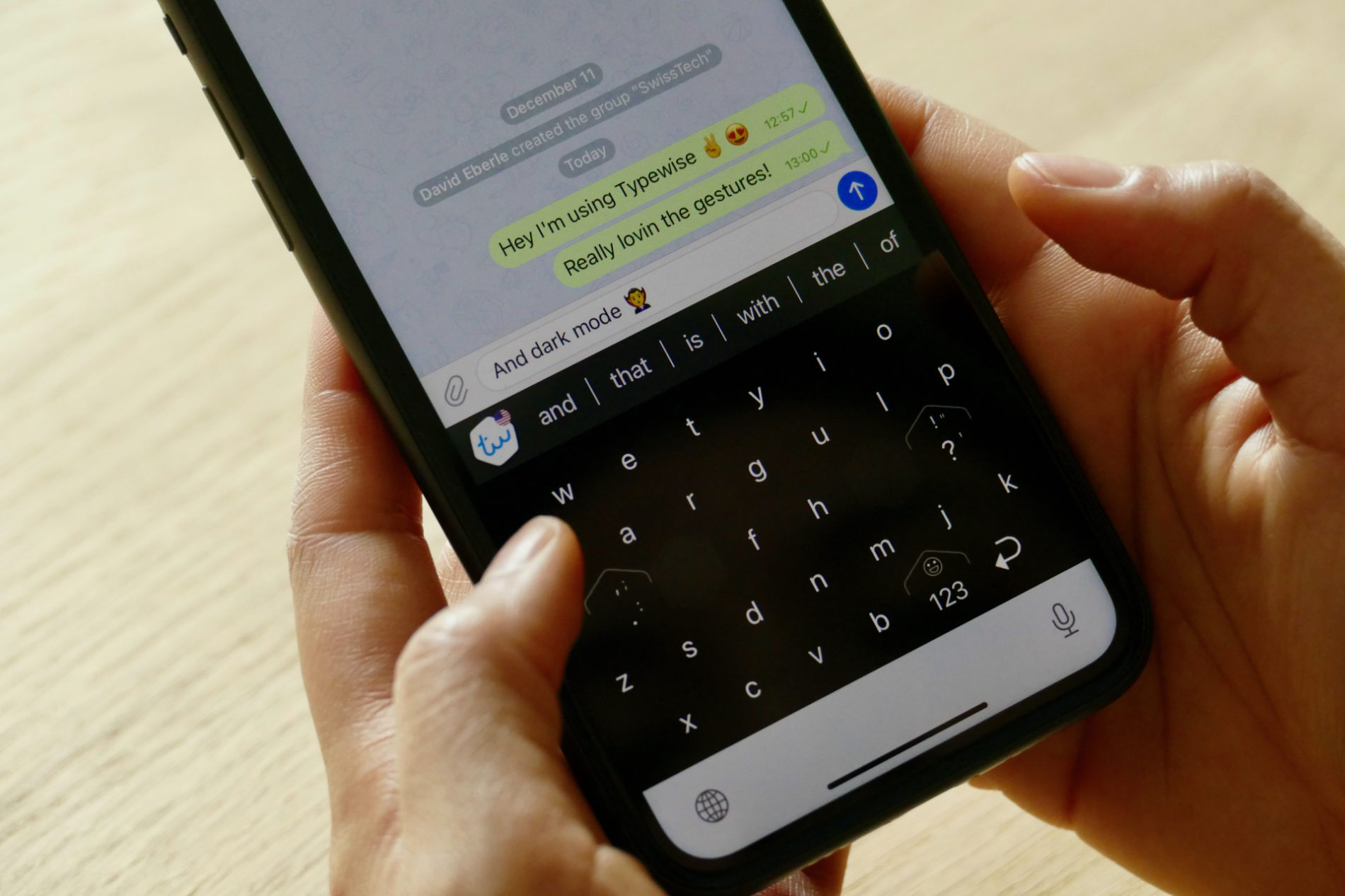 A keyboard is the most ubiquitous interface on your smartphone. It’s a constant that’s required as a tool for input in almost every app. That said, for most of us, using the virtual keyboard we use today on our smartphones has effectively become second nature. But as with every industry, a product arrives once in a while that tends to upend the way we do things.

Typewise’s Keyboard app is here to upend the way we type.

The keyboard combines smart autocorrect and text predictions with a multi-language capability, and a dynamic hexagonal keyboard designed for two-thumb typing; the app saves time, increases accuracy, and boosts productivity. Employing 100% private algorithms capable of running offline, Typewise has been designed to always ensure user privacy which is the opposite of most keyboard apps on the market. Typewise has also won second place in the Swiss AI Awards alongside the title of CES 2021 Innovation Awards Honoree.

I’m gonna disclose here that this isn’t the first time I’m talking about Typewise. I reviewed the app back in August and had some strong thoughts about how it worked and tried to change the way we typed on our smartphone. Particularly, I pointed out that the autocorrect system was naive and the keyboard lacked some features that made switching over from a traditional keyboard difficult.

With Typewise V3.0 that is set to release today, the company claims that it has improved autocorrect which is completely implemented and managed by AI that lives on your device. I’ve found that claim to be correct, but only to some extent. Apart from that, Typewise has also introduced some new features over several updates that improve the overall typing experience including haptics, word replacements, and more. Although, you’ll need to pay even for some basic features like returning to the alphabetical keyboard while you’re on the numerical keyboard by hitting Space.

All-in-all, the improvements that Typewise 3.0 brings to the table make it worth checking out, aside from a few rough edges.

Autocorrect is improved, but there’s still room for more

Typewise claims that it helps you reduce typos by 4x as compared to traditional keyboards. And it does so by employing Typewise’s own autocorrection technology that’s developed in collaboration with the Swiss Federal Institute of Technology.

In order to test out Typewise 3.0’s claims of an improved autocorrect system, I engaged myself in copying the app’s press release into the Notes app on my iPhone.

While the bigger size of individual keys reduced errors by a lot, the improved autocorrect also helped. I made some foolish errors including spelling “colloquialisms” wrong. The app quickly fixed that. It also fixed minor errors like typing “os” instead of “so.” However, while it was able to autocorrect many words, it failed to autocorrect some pretty simple words.

For instance, it entirely fails to capitalize the names of countries and cities. I typed “india.” While the keyboard should’ve automatically capitalized the first letter; making it “India”, it did not do that. Apart from that, for some reason, it does not capitalize the letter “I.” And one of the daftest failures was turning “autocorrect” itself into “a incorrect.”

This would make you think that the autocorrect system is flawed, but it only failed to correct a few words. I typed over 600 words on my smartphone and, for the most part, it worked as expected.

Typewise claims “this new system provides a higher percentage of accurately corrected words than other leading keyboard players such as Gboard and Swiftkey. While I wouldn’t say Typewise’s autocorrect system is better than these keyboards from Google and Microsoft as the company claims, it’s commendably close; which is especially great for a system that completely works on-device and offline.

The Hexagonal keyboard layout has a learning curve, but it increases typing speeds once you get the hang of it

The new hexagonal keyboard layout that promises a 33% increase in typing speed actually works. In my last review, I got frustrated with typing with the hexagonal keyboard for two days. But this time, I put a little bit more effort into getting accustomed to it, and after I got the hang of it, I actually preferred it over the traditional keyboard.

The traditional keyboard layout might have been in your life for a long time now and making a switch to Typewise’s hexagonal layout is unquestionably difficult. However, the app’s companion keyboard game helps you practice it. The rest you can learn from typing daily.

Typewise also offers a keyboard with a traditional layout for those who don’t intend to use the honeycomb layout. However, in my opinion, the traditional typewise keyboard adds little benefit over other traditional keyboards aside from a privacy-focused autocorrection system. I also found myself bumping into more typos using Typewise’s traditional-layout keyboard as compared to other keyboards.

Nevertheless, I was impressed by the fact that with just a day’s worth of practice, I was able to reach typing speeds close to that of when I type with the default iOS keyboard. So, that’s absolutely worth checking out.

It lacks some essential features

Modern virtual keyboards are quite complex. They pack in a bunch of features alongside the regular typing functionality that gives that keyboard an edge over others. For instance, many prefer Gboard (even on iOS) for its Google search integration. iOS’ default keyboard itself includes some basic functionality like emoji search, swipe typing, one-handed usage, and more.

Typewise, unfortunately, only focuses on the fundamentals. Personally, I’m okay with not having flashy features like an online GIF library or Google search right on the keyboard, but I expect a keyboard to have close-to-basic functionality like emoji search. When I asked CEO David Eberle about that, he said Typewise has some “cool stuff regarding emojis in the pipeline” that includes being able to search for emojis. However, as of now, the feature isn’t there.

Another feature that I would’ve loved on the keyboard is swipe typing. However, since the whole existence of Typewise is built upon typing with your two thumbs and using gestures, adding swipe typing is a difficult task.

However, that doesn’t excuse the fact that the keyboard completely discourages one-handed usage. Several times in a day, I find myself unable to use my phone with two thumbs and I simply cannot reach all the keys on the typewise keyboard. The iOS keyboard, by contrast, has this neat feature where you can shift the keyboard to either side of the screen depending on what thumb you are using to type with.

Its customization and Automatic Language-switching features are commendable

Another main feature that Typewise touts aside from its AI autocorrection prowess is the fact that it can seamlessly switch between languages while you’re typing. It also recognizes dialects within languages. Currently, it’s only available in 40+ languages, but the company says it will add more languages in future updates.

The language switching feature works flawlessly. The Typewise logo above the keyboard intuitively displays which language you are currently typing in.

However, it’s included in the premium subscription, meaning if you are a free user, you will only be able to switch languages manually.

One of the strengths of Typewise is its privacy-centric approach. Modern virtual keyboards like Swiftkey and Google constantly upload your typing data to their servers and process it there to personalize your typing experience. This is a major hit to your privacy.

Thankfully, Typewise has devised a completely offline system that processes your typing data on-device using AI and none of it is sent to Typewise or its developers. While it’s a pro feature, the personalized typing experience is brought to you by Typewise’s AI that learns from your typos and errors and improves itself.

The Typewise app doesn’t even ask you to create an account, which is clearly indicative of the app’s privacy stance. One disadvantage, although, is that there is seemingly no way to sync your typing data with a new device since there is no account to sync to.

Prior to this week, I was happily using the default iOS keyboard on my iPhone. But now I’ve found a new one—Typewise. And I think I’m going to stick to it, especially since it seems to have improved my typing speed by a bit and reduced my frustration with having to use a virtual keyboard on my iPhone.

Despite that, it’s worth noting that most features that make this app great like personalized typing, text replacement, haptic feedback toggle, and more are locked behind a subscription. You can shell out $2 per month, $9.49 per year, or $24.99 as a one-time purchase.

Considering the fact that it’s the only keyboard that offers the level of privacy everyone today deserves, I think it’s absolutely worth shelling for a subscription or that one-time fee.

You can download Typewise V3.0 from the App Store and the Google Play Store starting today.

The 8-Bit is not associated with any of the products listed in this article. As a result, editorial content remains unaffected.