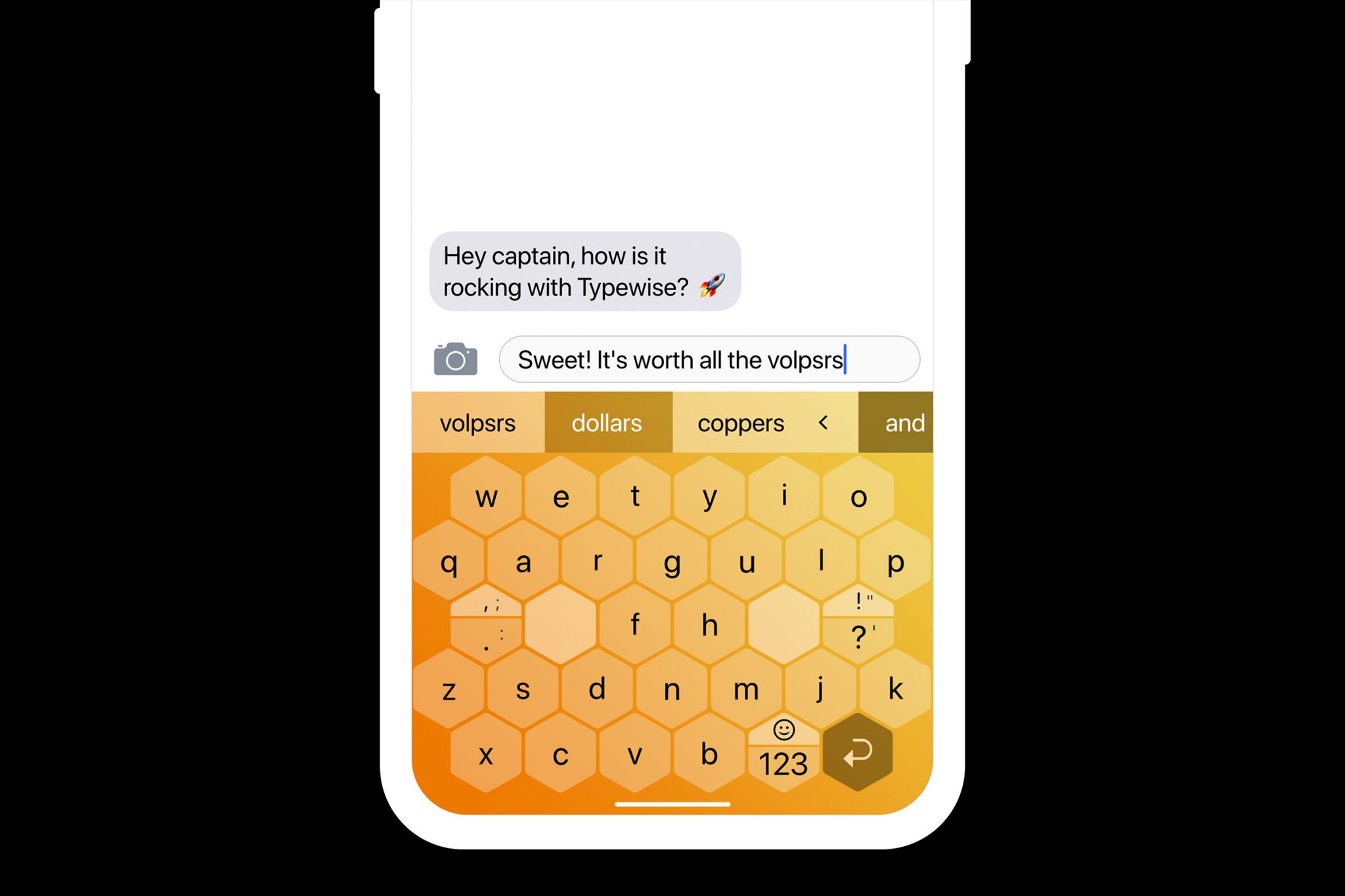 At a very steep learning curve

The premise of technology lies in constant improvement. A piece of technology that seems stunning and flawless today may feel obsolete tomorrow and will demand improvement. Take, for example, Blackberry phones (remember them?). They had a handy physical keyboard that was unique to the experience of “owning a Blackberry.”

That compressed physical keyboard on Blackberry smartphones was derived from, you guessed it — the traditional keyboard. But that wasn’t the best idea because it was limiting. Not much innovation could have been done in the smartphone realm if the physical QWERTY keyboard hadn’t been converted into a virtual one. Doing so, however, was difficult. But Apple was the first one to nail it. Apple launched its revolutionary iPhone that introduced a completely touch-sensitive display without a physical keyboard.

The virtual keyboard was a welcome change and people loved the concept of it. That was good. Fast forward 13 years and nothing’s considerably new.

The only changes that have been made to the virtual keyboard are the addition of emojis, improvement in autocorrection, dictation, and the addition of swipe-typing gestures. All these changes have more or less reduced the shortcomings of virtual keyboards. None have fixed it. None have tried to revolutionize the whole typing experience from the ground up. Typewise is an app that tends to fix that and is succeeding. But it has its own flaws.

It’s a third-party keyboard app that promises two things — error-free typing and maximum privacy — above anything else. The app is available for free on both the App Store and the Play Store to try. However, it’ll cost you $9.49 annually or $1.99 for a monthly subscription to the pro version of the app that provides additional features over the regular bunch, including the ability to change the theme of the keyboard.

The app maker claims Typewise will “result in 4x fewer typos.” This is possible “through
algorithms that analyze where individual keys are pressed exactly and thus eliminate systematic
errors” and “a patented interface with larger keys that are easier to hit.”

Typewise also rightly touts that it is the proponent of privacy by keeping neural networks confined to the device itself. Nothing leaves the device and is uploaded to the cloud for processing. Typewise says it aids privacy and it indeed does.

The first time you’ll set your eyes on this keyboard, you’ll easily get excited. Because, well, it’s new and you’ve never seen anything like it. Before you start pressing your thumbs on glass, though, Typewise runs you through a tutorial aimed at getting you accustomed to the keyboard. Once the tutorial is complete and you’ve completely set it up, you’ll be good to go. You can start typing.

The keys are hexagonal in shape, designed to allocate the surface area of your thumbs. And that really shows. I’ve very rarely missed a key typing using my thumbs while I was testing Typewise. I love how the spacebar is reenvisioned and placed in two separate locations on the keyboard instead of at the bottom as the regular, separate bar. This lets me maintain a steady pace while typing since I don’t have to crouch my thumbs to reach to the bottom of the screen (which is where the space bar usually is on most keyboards).

Typewise rightly touts that it’s the proponent of privacy

You will enjoy all of this even more with haptic vibrations enabled. But that’s a pro-only feature. However, the biggest thing to mention while talking about this keyboard is the fact that the keys are not arranged in the regular QWERTY layout. They’re randomly placed which means you might have a hard time adjusting.

One of the major driving forces behind the entire concept of Typewise is its artificial intelligence and neural networks. Typewise says their neural network is able to learn from the user’s typing habits and adjust accordingly. It can also learn slang from your language. They’re not stopping here. The app maker says they plan on improving their text-prediction AI and have already started working toward it.

However, in my time spent using Typewise, I came across some problems with autocorrection that seemed outright disconcerting given the claims the app makes. For one, it failed to register an individual “i” and capitalize it automatically. Moreover, there was no way for me to tell the app that I wanted to change this behavior. Some third-party keyboard apps allow users to hop into the keyboard settings and override the autocorrection system for certain words. Typewise doesn’t have anything as such.

However, the app is still young, and based on the promise that they’re building the next generation of text-prediction AI, I can say for sure that it’s going to improve and will be worth in the near future.

We talked about the aesthetics of the keyboard, which are a little convoluted and difficult-to-perceive for first-timers. However, you can say the same for functionality as well. Typewise has an extremely steep learning curve. And a tiny part of the reason is the new keyboard layout. Typing speed aside, they say that that it can reduce typos to a considerable level. And that’s a claim that I can personally back. But that could simply be because the keys on the keyboard are jumbled and I cannot find them in time which makes me type carefully which, by extension, makes my typing error-free. You get the gist, right? The main reason Typewise claims they can help reduce typos is the fact that the surface area to tap on individual keys has been increased, thereby making it easier to tap and make fewer typos.

Then, you will also have to learn all the complex gestures since a lot of the crucial tasks like deleting text or capitalizing text relies on them. One flaw with the keyboard is that since the gesture system has replaced the Shift key, you cannot enable CAPS lock.

But… but… but, if you don’t want to indulge in all this complexity and simply enjoy Typewise’s unparalleled privacy, you can always switch to Typewise’s QWERTY keyboard which the app offers as an alternative option. In my opinion, if I had to ultimately end up using a QWERTY keyboard, I would better go with Apple’s stock iOS keyboard.

The developer says that most users will learn to use the keyboard fluently in a week’s time. I took on that challenge for you guys so you don’t have to, but I’ve got to admit that I was frustrated the first two days and then some. I am still kind of frustrated at times when I have to use the keyboard for a “quick” Google search because I simply can’t type that fast yet with Typewise.

And I get it. It’s hard to make people switch in a heartbeat from a keyboard they’d been accustomed to most of their lives. Switching over means getting into an uncomfortable zone where you are unsure of the tool you have at your disposal if it would perform the task you intend it to. Ultimately, you’re gonna either pass through the uncomfortable training-wheels phase or fall back to the regular, much more familiar keyboard and never touch Typewise again.

Look, the thing is; it’s difficult to leave something familiar and pursue the unknown for the sake of discovery. For one, you wouldn’t want to disrupt your daily smartphone social life (Twitter, iMessage, Instagram, Facebook, etc) by learning to use a new virtual keyboard to brighten the hopes of reducing typos.

But Typewisee does its best to ensure you properly get accustomed to the keyboard by playing its keyboard-specific games on a browser. The games usually involve you tapping on different characters on the keyboard to control the character in the game.

Despite all its advanced features and scientific claims, Typewise feels like a work-in-progress. It doesn’t have most of the features a modern virtual keyboard should including dictation, swipe-typing, emoji search functionality. I don’t personally care about dictation and emoji search functionality as much as I care about swipe-typing. Sure, using two thumbs to type faster and error-free is good. But what about the times when I’m using my phone one-handed and still want it to be as quick?

One thing that justifiably sets apart Typewise from its likes is the fact that it’s completely offline. The app doesn’t ask you to create an account at all. Plus, all the data is collected and stored right on your device and none of it is sent to the cloud or to the developers for evaluation. Everything that needs to be processed is handled by the AI on device. Also, the fact that they were able to package such a complex system in a little app is quite surprising.

So, do you need to spend $2 on a keyboard app? I think not. The keyboard has to be exceptional for that. Typewise is, in a sense, exceptional. But every aspect of it currently feels like it’s a work-in-progress. So, I cannot recommend this to you. But I can make a prediction.

Look, creating a product that makes people shift from the current product they’re using is a tough job; not everyone can do it. It takes time, effort, and constant deliberation. Typewise says it’s going to launch its advanced text predictions in the coming months. They also say that it will outperform modern autocorrect algorithms the likes of Apple’s and Google’s. Until then, stick with the QWERTY you have.

You can get Typewise both from the App Store and the Play Store from here.