How to turn on Disappearing Messages on WhatsApp 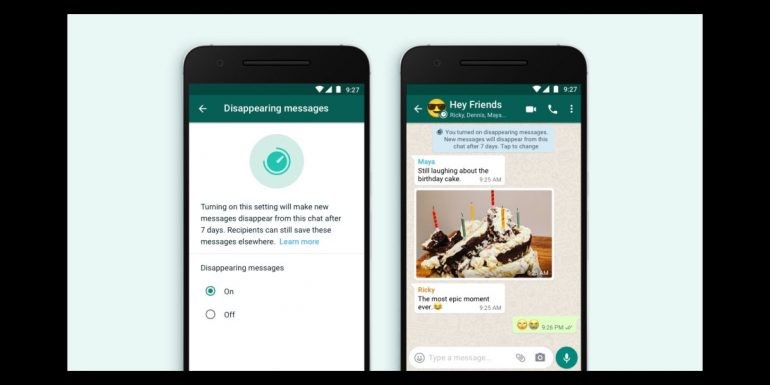 Facebook has finally started rolling out its Disappearing Messages feature to WhatsApp users worldwide. Here is how to turn it on.

Disappearing Messages is a new feature within WhatsApp that parent company Facebook is rolling out to users worldwide. It’s a self-destruction feature that erases your messages after a set period of time, which is seven minutes in WhatsApp’s case.

WhatsApp chats are inherently private and you might prefer a message to erase itself after seven days. Automatically erasing messages is also quite helpful if you normally struggle with keeping a group clean. Although, Facebook is currently acquiring feedback as to how long it should keep messages if the feature is turned on, according to TechCrunch.

Here’s how the Disappearing Messages feature on WhatsApp works: after turning on the feature, new messages that appear and also those that you send get erased after a period of seven days from both your phone and your recipient’s phone.

Facebook says that you won’t be able to read new messages after the seven-day period has lapsed. Those messages, however, will remain as previews in the notifications pane on your iPhone provided you haven’t cleared your notifications. Replying to a disappearing message will keep that message in the chat even after the seven-day limit. Moreover, if a disappearing message is forwarded to a chat that doesn’t have the feature enabled, it won’t disappear in that chat.

WhatsApp backups that are taken before a message disappears will include that message. There are multiple ways people can circumvent this new privacy feature. For instance, the recipient can either capture a screenshot of the disappearing message or copy and paste it someplace else. There is no way to avoid that.

The Disappearing Messages feature also applies to media such as photos, videos, and audio files. However, if you have media settings within WhatsApp set to auto-download, photos and videos will be saved to your camera roll even if they disappear from the chat. You can, however, choose to turn off auto-download.

How to turn on Disappearing Messages in WhatsApp

Disappearing Messages is a feature that works on a per-chat basis. This means there isn’t a universal switch. So, you will have to enable it within each chat individually.