Oppo’s freshly announced F9 has a leaking water drop at the top! 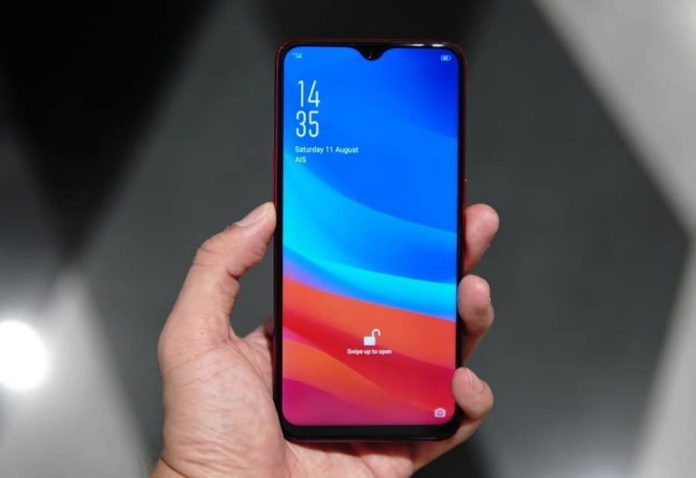 I agree, the title appears a bit misleading. But, it’s the truth. If you’ve caught up with tech news lately, you might be aware of the Oppo F9 – Oppo’s recently announced smartphone. It has a notch which rethinks the way notches should be.

Looking like a slight bulge, the notch seems as if the bezel melted and a drop of it froze over the screen after cooling down. The best part is, it doesn’t totally look like a notch. And it sure doesn’t intrude your screen’s real estate. The status bar on the Oppo F9 doesn’t shift away along the sidelines in solitude, instead, it gets highlighted due to the enhanced notch design.

It’s true that Oppo has previously, surprisingly managed to create a phone with no bezels and no notch, but after noticing the F9, there’s a feeling like a notch like this might be better than a completely bezel-less display. Essential initially released a phone with a bezel-less display, and it sported a notch which had a similar notch design. But, it’s slightly inferior to the notch on the Oppo F9.

At the back, the F9 has a diamond-like glare which is equally fascinating as the notch on this phone. The glare, though, is magnified by bold color options like red and blue. Yes, the colors have their own fancy names, but let’s not get there.

Water drops are the new notches!

Having said that, only the notch on this phone is worthy of raising eyebrows. Spec-wise, this device is far from gaining a flagship title.

It has an 8-core MediaTek Helio P60 processor, which is an unusual choice considering the number of smartphones resorting to Qualcomm’s chips. It has a 19.5:9 1080p LCD display with, of course, the revolutionary notch. A 3500 mAh battery inside is supported by Oppo’s VOOC fast charging, a technology similar to OnePlus’s dash charging.

It’s camera, too, is a bit off-the-grid as the F9 sports a 16-megapixel f/1.9 and a 2-megapixel secondary sensor at the back, which is a bit bona fide as compared to other options out there; nothing’s exceptional here. On the other hand, the front selfie camera has a 25-megapixel f/2.0 camera module embedded into the notch. This is eccentric, as, usually one would prefer a solid back camera while compromising on the front. But, again, don’t forget that this phone comes from Oppo, which has a long history of smartphones focused on producing better selfies. And Oppo’s this trend comes from the fact that the markets it serves have a huge requirement of being able to capture good selfies.

Apart from that, the F9 externally has a headphone jack, a micro SD card slot, a rear-mounted fingerprint sensor, 6 GB of RAM and 64 GB of storage.

One more thing that makes this phone unique is the fact that it is the first phone that comes with Corning’s Gorilla Glass 6, which can survive up to 15 drops from a meter’s length.

You can expect to get this phone soon if you’re in either in India, Indonesia, Malaysia, the Philippines, Thailand or Vietnam. Besides, the F9 will also launch in middle-eastern markets such as Egypt and Morocco. The pricing info on the phone is not available yet, but judging from its specs, it seems that the F9 will be in the $300-$400 price range; or lower.