Apple reportedly working on a foldable iPhone, according to Jon Prosser 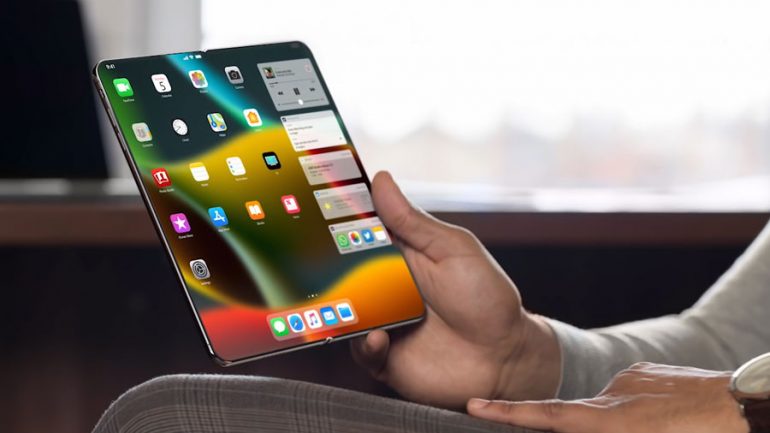 Update: Here’s how Prosser describes the phone may end up to be:

He says the current prototype features two separate display panels that are connected by a hinge. Each panel, further, looks like the iPhone 11 Pro with similar stainless steel edges, and the notch is probably shifted to the back of the top panel.

I can see how the notch would work. It would authenticate the user before the user opens the flap.

And here’s PatentlyApple reporting a new patent resembling what Jon Prosser described. It’s just a patent, though, and is uncertain to materialize.

Jon Prosser replied to GregsGadgets’ Gregory McFadden who runs a tech YouTube channel when he tweeted out this:

Further, in his thread, he confirmed that Apple is indeed working on foldable iPhones.

While conversations like this may look silly while reporting, they convey something important.

While there have been some foldables out in the market for some time, they are far from perfect. The Samsung Galaxy Fold was rushed out to the public and failed badly, at least initially. Many reviewers and some customers had to deal with broken displays when they simply “folded” the Fold. Moreover, the company couldn’t explain the pricing on the foldable, which led to its ultimate demise.

However, the Galaxy Z Flip, when it launched, reinstated some hope within people. But it couldn’t justify the price, much like every other foldable phone that exists right now including the new Motorola Razr foldable phone. Not one manufacturer offers features that are worth they charge the price for.

Samsung has even gone to the lengths so as to state that the Z Flip is an iconic “fashion statement.” Comparatively, Apple doesn’t need its brands to be a fashion statement because it itself is one.

So, the inconsistency and the naive state of foldable smartphone technology may be the prime reason Apple hasn’t officially dipped its hands in there.

But, now, it seems to be the right time for Apple to pop up its version of a folding phone. Apple filed a patent back in 2016 that resembled a smartphone with a folding display. Later, in March 2018, a Bank of America Merrill Lynch analyst, Wamsi Mohan, stated that Apple was planning to launch a foldable smartphone in 2020 and that it would unfold into an iPad-like form factor.

Further, an interview with a professor of glass science at Alfred University and some information provided from Corning — the Gorilla Glass maker — suggest that new iPhones with foldable displays may be coming as soon as next year. This was the last rumor anyone received, until now.

Now, Jon Prosser says that the foldable won’t be ready this year. But it’s coming. Jon Prosser has had an impressive track record when it comes to dropping leaks and churning out rumors. For instance, he correctly revealed the launch date and time of the iPhone SE 2 and that the 13-inch 2020 MacBook Pros were coming.

How will the new foldable iPhone look like? How will it function?

The question that arises now is: How does Apple actually plan to implement a foldable?

There are several possibilities. Wamsi Mohan’s statement suggests that Apple could launch an iPhone that could potentially “double up as a tablet.” By contrast, Apple could also turn an iPad Mini into a foldable phone. Lastly, the Cupertino giant could further convert a full-form iPad into an e-reader that fits into pockets and works as a traditional powerhouse that it is when unfolded.

There’s also running debate about the software that’s supposed to run these foldable smartphones. Google, for one, has already released some guidelines for developers intending to update their apps for foldable screens.

However, how Apple would do this is still a mystery. All we know is that Apple has a lot of tools at its disposal, and a lot of apps in the app store with an active developer base to make this product possible. It’s only a matter of time before we get to know, how.

Apple reportedly working on a foldable iPhone, according to Jon Prosser

I really wish Apple fixes these imperfections in iOS 14