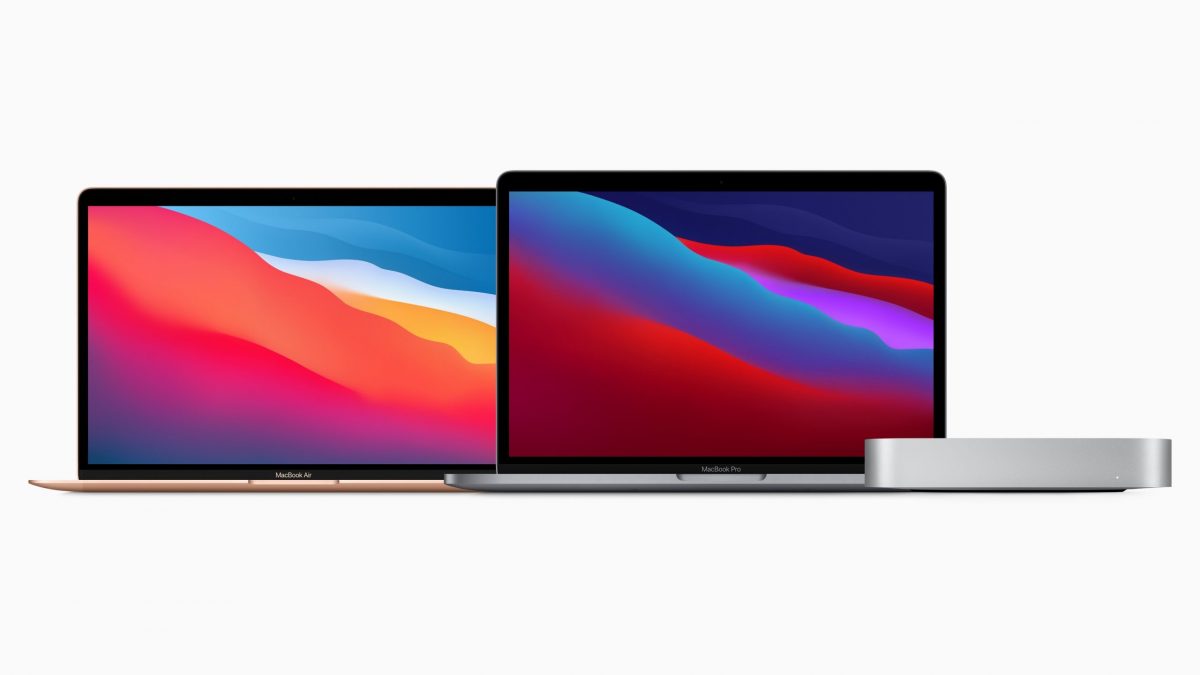 These new Macs are available to pre-order right now and will start shipping next week. However, if you’re struggling with the question “which Apple Silicon Mac should I buy?” here’s an answer.

The new MacBook Air with the M1 chip starts at $999 up to $2,049 for the completely specced out version. You can pay the same amounts of extra money as the MacBook Pro to install Final Cut Pro X and Logic Pro X on the MacBook Air.

That being said, the new MacBook models are more affordable than previous generations. But it still doesn’t answer your query of which one you should purchase. For that, we’ll need to delve into the specs.

Performance is all this event is about. The prime reason Apple chose to transition its Macs from using Intel chips to using its own Silicon is the fact that the former did not allow Apple to grow due to the lack of headroom.

Apple says both new MacBooks are faster than their predecessors sporting Intel chips and are just as power efficient. Moreover, both the new MacBook Air and the new MacBook Pro are quite similar when it comes to performance specifications.

On the contrary, there’s one major difference between the new MacBook Pro and the MacBook Air that could have a considerable impact on performance. The latter does not have a fan. While it might sound impressive (pun intended) for a computer so fast (as per Apple’s claims) to be fanless, it comes along with certain implications.

First is that the processor may budge under higher temperatures and may throttle performance. Of course, even though Apple claims that there won’t be any problems relating to heat affecting performance, I cannot say anything for sure before testing it out myself. But, I kind of having an inkling that you might be able to push the new Air to levels where it’ll start heating and as a result, start throttling the CPU.

The MacBook Pro, on the other hand won’t have this issue since it ships with an internal cooling system.

So far, this is where we stand: if you are a light user whose workflow involves light tasks like regular emailing, browsing, minimal photo editing, and more, you should get the MacBook Air. Don’t get me wrong. Apple says that you will be able to edit two streams of full-resolution 4K video simultaneously on it. It’s a powerful computer. But whatever Apple mentioned with respect to the new Air is something that a basic user these days would do.

In that case, the MacBook Pro handles the power-intensive workflows better. Apple presented Pro-like apps including Cinema 4D, Photoshop, and more while introducing the Pro. This clearly means that the Pro is capable of handling more processor-intensive tasks. Also, Apple does not list the clock speed of these processors. We’ll have to wait for Geekbench results to show up to come to a conclusion.

Clock speed is also a major factor when it comes to performance. Despite having the same M1 chip, if the MacBook Air is clocked in at a lower speed than the MacBook Pro, it will perform accordingly. This is most likely the case with the current setup.

Note that you can upgrade from the basic configuration to up to 16GB of unified memory and 2TB of storage capacity on both MacBook models.

Also worth noting is the fact that none of the new Macs released at the event today (including the Mac mini) can be upgraded to more than 16GB of RAM, which may be a bit limiting for those used to 32GB or RAM on Intel-based Macs. Moreover, the M1 chip Macs also don’t allow users to connect external GPUs, thereby making the collective appeal of Macs with Apple Silicon a little

Both the MacBook Air and the MacBook Pro with the M1 chip feature the same 13-inch LED-backlit IPS LCD Retina display. To know more about displays in-depth, check out our Mini-LED vs OLED comparison.

Both have a screen resolution of 2560 x 1600 pixels and both feature a Wide (P3) color gamut with True Tone technology.

However, one difference between the MacBook Air and the MacBook Pro with M1 chips when it comes to display is brightness. The Air’s screen stands bright at 400 nits while the Pro has a brightness of 500 nits.

Now, a difference of 100 nits isn’t that big a deal. However, when it comes to editing photos and videos that involve color, the brighter display will be more helpful. It’s also a treat while watching a Netflix movie. Furthermore, the extra 100 nits will make a huge difference outdoors under sunlight, if you need to work outside. (You know the pandemic isn’t going to last forever)

When you’re carrying a computer in your backpack, its weight matters. You wouldn’t want to roam around carrying a bulky laptop weighing you down.

Aside from the performance and the battery life, a lot of people care about speakers in a laptop, including me. Speakers come in handy while watching videos and are especially useful during online Zoom meetings since they’ve become a staple of daily life at least until normalcy resides again.

The MacBook Pro has an all over better speaker and microphone setup than the MacBook Air. It has stereo speakers with high dynamic range which is what lacks in the Air’s speakers. High dynamic range audio, unlike HDR video is less noticeable, but it ultimately adds to the immersive experience while watching a supported video or even listening to music.

Apple doesn’t exactly reveal what Studio-quality stands for aside from the obvious assumption that it replicates a studio microphone. While it may really not sound like an actual studio microphone, you can rest assured that the Pro will capture better audio during Zoom calls and while recording.

After a long time of facing criticism for its failed Butterfly-mechanism keyboard, Apple has learnt its lesson and has included a Magic keyboard with scissor-switch mechanism.

The keyboards on both new MacBook models are identical except for the fact that the row of function keys on the MacBook Pro is replaced by the Touch Bar. The Touch Bar is essentially a display that shows contextual buttons based on the applications running on the screen. For example, while watching a video, the Touch Bar shows a scrubber and volume controls.

The MacBook Air doesn’t feature a Touch Bar, though.

However, the addition of the Touch Bar doesn’t necessarily mean it’s better. A lot of people do not like it and would prefer the regular set of function keys but have no say. That said, it’s often largely passed off as a gimmick rather than a useful feature. So, you shouldn’t base your decision about which Apple Silicon MacBook you should buy on the existence of the Touch Bar.

Apple says the new MacBooks have the “longest battery life in a Mac.”

The MacBook Air, on the other hand, offers up to 15 hours of wireless web browsing and up to 18 hours of video streaming playback. That’s an impressive battery and should last you throughout the day.

When it comes to charging your MacBook Pro, it comes with a faster 61W power adapter that will fill up the Pro’s battery quick enough. The MacBook Air ships with a relatively slower 30W power adapter. So, at times when you’re in a hurry and need to grab your Mac and leave, the faster charging may come in handy.

However, you can always purchase a faster adapter with increased wattage from Apple or from other third-party brands. But that’s going to add to your cost.

Both the new MacBook Air and the MacBook Pro are fairly competent devices. And I think that the Air has gotten somewhat closer to the Pro territory thanks to the M1 chip.

If you do not care about having the best performance available and are okay with having a pretty good performance instead, get the MacBook Air. Sure, you can spend $50 more to jump from the 8-core GPU version of the Air to the MacBook Pro, but then you’ll be giving up on the 512GB of storage and settling with just 256GB. If you’re okay with that, those extra $50 are definitely worth it.

In my opinion, you’d be able to perform most tasks, even demanding ones, perfectly fine on the MacBook Air. The MacBook Pro is just for those who want to extend the boundaries as it would let you do that, thanks to the inclusion of a fan and probably better clock speed.

You can also go for the most basic model of the MacBook Air with the 7-core GPU that costs $999. It’ll also work well mostly all the time, with only starting to give in while performing graphics-intensive tasks. This means that if you want a new MacBook for simply scrolling through the web, attend online Zoom calls, blog a little, and do some light photo editing, the $999 MacBook Air with M1 chip is definitely the one you should get.

Ultimately, if you are ready to shell out north of $1200, there’s no doubt the 13-inch M1 MacBook Pro is the laptop you should invest in.

Of course, again, you can also upgrade both laptops by adding up to 16 gigs of unified memory and 2TB of storage but all of the above arguments will still apply.

Lastly, even though it’s not directly relevant to this comparison, I want to get it out there that if you want some extra headroom to upscale your performance in the future with the MacBook Pro specifically, you’ll be better off buying an Intel Mac right now.

It’ll allow you to enjoy 32 gigs of RAM, and support external GPUs.