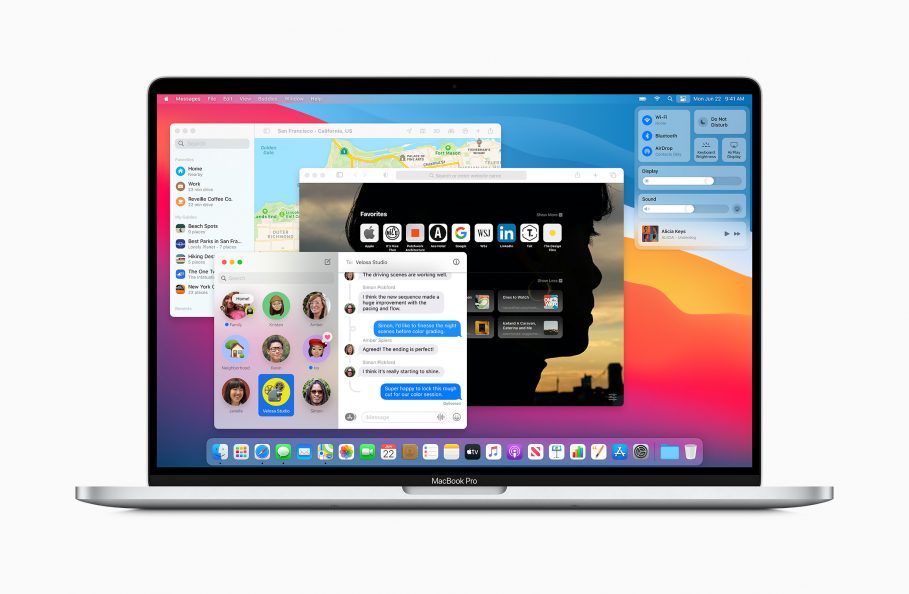 macOS Big Sur accompanies the new MacBook models that are a part of Apple’s transition away from using Intel processors and instead, running custom-designed silicon. Apple says it enables MacBooks to wake just as fast as an iPhone or iPad.

It’s also available for existing supported MacBook models. All you need to do in order to update to macOS Big Sur is head over to Apple Menu – System Preferences and click Software Update. There might be a chance that the OTA update doesn’t appear right away. In that case, retry clicking on the Software Update button a couple more times until it appears.

macOS Big Sur brings along a ton of improvements. First off, it features an entirely new design that looks and feels more like an iPad and less like the design on previous Mac versions. It’s a controversial design as opinions on the likeability of it are polarizing. Nevertheless, the new iPad-like design makes sense as most iOS and iPadOS apps will be readily compatible with the new MacBook models announced today.

There are some noticeable changes throughout the interface in Big Sur: the sidebar is now more prominent, the dock is updated to make it look more like an iPad dock, you can now access the familiar control center from your iPhone on the Mac, and the notification center now features iOS 14-like widgets.

Apple has also updated the Safari browser with some important features. First off there’s the customization options that let you allow to edit the homepage according to your taste by adding a background photo.

Safari on macOS Big Sur weighs in heavy on user privacy by introducing a Privacy Report feature that reveals how safe a website is and in what ways it’s tracking you all through a click of a button.

There’s now a dedicated category for Safari extensions in the App Store, just like the Chrome Web Store on the Chrome browser. Then there are some minute details like tab previews upon hovering and increased tabs visibility.

Apple claims that the updated Safari in Big Sur is more than “50% faster on average at loading frequently visited websites than Chrome” and is also more power-efficient.

Furthermore, the Messages app on Big Sur reflects the iOS 14 Messages app on iPhone and iPad. It now features inline replies, easy user tagging in a group, the ability to pin conversations and much more.

One interesting update here is that Messages now lets you create Memoji right on your Mac, which highlights the fact that iOS, iPadOS, and macOS are more unified than ever. The Messages app also features improved search that also factors in photos and links alongside regular text.

The Maps app also comes with some new features including suggestions for places, electric vehicle routing, cycling routes, indoor maps, and the new Look Around feature.

Privacy is an important aspect for people and the prime narrative for Apple’s products. This shows in macOS Big Sur. Although it’s a universal feature, the Mac App Store is also to gain a new Privacy Label for each app that requires developers to enlist then and there the various user tracking systems implemented in the app.

It’ll also be available on the App Store on iOS and iPadOS.

There are a bunch of other features in an improvements as well that I’ve decided not to include in this post. However, macOS Big Sur seems like an integral cog in the machine that facilitates the Intel-to-Mac transition.

Check out our other articles on Apple’s Mac Event Coverage here.