How to screenshot an entire web page in Safari on iOS 13!

Access the best of the internet in a PDF! 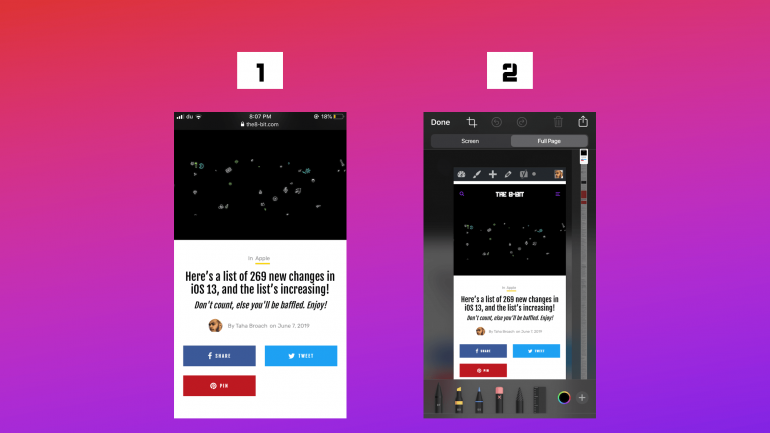 Sometimes, when you need to share a great article or a comic strip you found embedded on a website and want to send it as a screenshot, it’s arguably difficult to capture it in individual parts and then send them in a way that doesn’t mess up the chronological order. Trust me. It’s a nightmare when that happens.

If you want to capture more than what displays on your screen while browsing in Safari, there’s good news for you.

iOS 13 now lets you efficiently use the screenshot tool to capture an entire web page instead of what’s visible on the screen at the time. Note that, instead of saving it as a photo, iOS saves the long screenshot as a PDF document for easy accessibility and compatibility.

Here’s how to screenshot an entire web page in Safari on iOS 13!

Note: Long screenshots only work in Safari on iPhone and iPad on iOS 13.

Screenshots on iOS have always been handy. Look anywhere on the web, and you’ll find pictures of iOS’ distinctive user interface, which is because of two reasons. First, because taking screenshots on iOS is a breeze, especially after the new screenshots editing interface that was introduced in iOS 11.

Second, because iOS is the most popular mobile operating system after Android.

However, Android has always been ahead of iOS when it comes to taking screenshots. For instance, some Android OEMs have had the ability to capture long screenshots way before iOS first introduced them with iOS 13 two weeks ago.

But, hey, it’s good to see Apple finally catching up with essential features. And it has precisely hit the spot this time with iOS 13.

Check out our other guides on iOS 13: