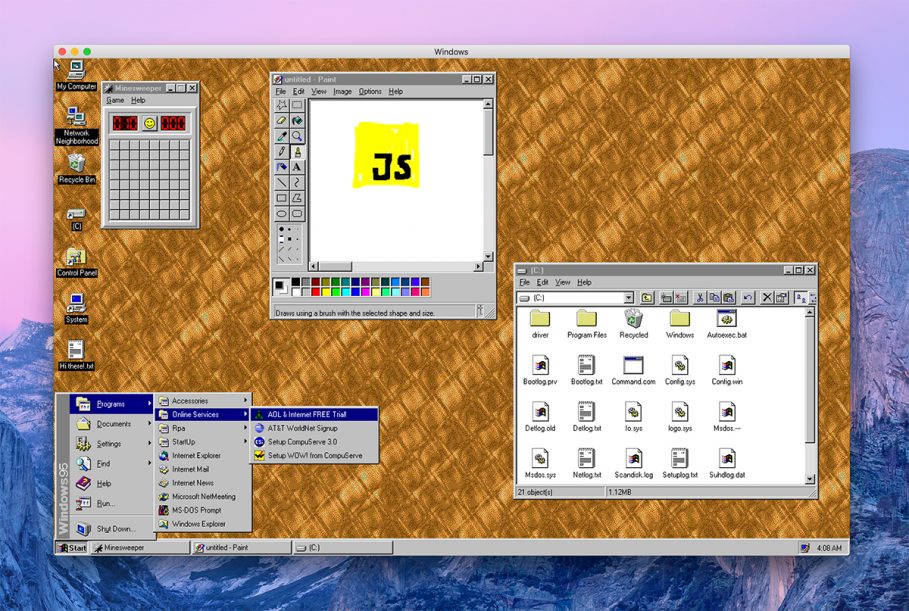 A developer has updated his app that enables running legacy operating systems such as Windows 95 and macOS 8 to support M1 Macs.

Developer Felix Rieseberg, who creates desktop apps over at Slack, updated his apps titled “macintosh.js” and “windows95.” Both apps let you run these legacy systems on macOS with close-to-original support. And now, they’ve been updated to support Macs with Apple’s M1 chipset, meaning folks with the newer Macs can poke around at the old OSes.

Felix’s approach is somewhat different from traditional virtualization or emulation. Instead of having to download the image file for these OSes, it’s packed into an app that is readily available to run.

He was able to do this using Electron, which is a popular framework for creating native applications with languages like JavaScript, HTML, and CSS. Many popular apps like WhatsApp’s desktop app, Visual Studio Code, Twitch’s desktop app, inVision, and Microsoft Teams are built using the Electron framework.

Installing and running an OS that launched more than 20 years ago might not be beneficial in an obvious sense, but it’s a clear win for enthusiasts who want to do it to understand the roots of modern operating systems. Furthermore, one rather nostalgic advantage is that you can run old games like Doom, Fury 3, and more on these operating systems.

There’s also something for vintage Mac enthusiasts as they can install the macintosh.js app to run macOS 8 pretending to be a 1991 Macintosh Quadra. The app also comes with certain games and software preinstalled including Civilization 2, Duke Nukem 3D, Oregon Trail, Photoshop 3, Premiere 4, Apple Web Page Constructor Kit, and more.

The developer notes that all of this is just recreational and is just a quick way to experience nostalgia. If you intend to do something more serious with these installations, you’d be better off emulating them in other ways, say, in a virtual machine.

Apple’s M1 chip is based on an arm64 architecture which makes it difficult for apps designed for different chipsets to run on the new Macs. Although Apple has included its Rosetta 2 framework for real-time translation of Intel-based apps, it does little while trying to emulate entire operating systems, which is why developers have been building their own workarounds.

At the moment, it’s possible to emulate most Windows and Linux operating systems, thanks to Parallels Desktop, which added support for M1 Macs recently.

While virtualization and emulation have been widely established on M1 Macs, it’s nice to take a stroll down memory lane by trying to install macOS 8 or Windows 95 on your new mac. It makes you realize how far you’ve come and how complex operating systems have grown to be over the years.

For installation instructions and other questions, you can head over to the macintosh.js and windows95 pages on Github.