These are the best Google Apps alternatives for Android! 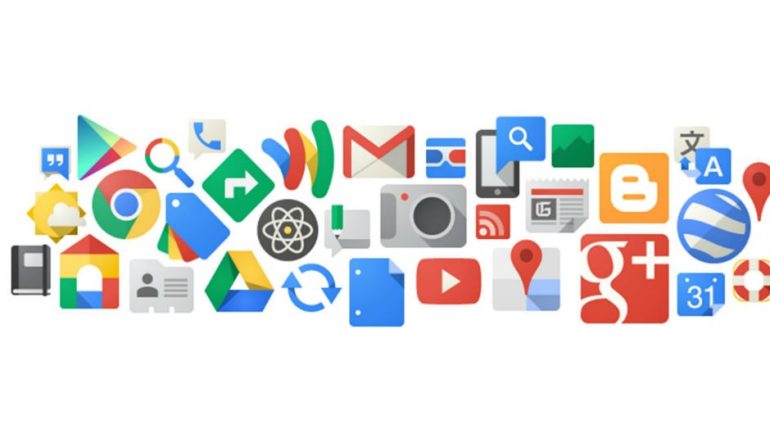 A change might be coming to Android in Europe. And it’s not just a change, it’s the biggest change in the history of Android.

In response to a European Commission lawsuit, the company has announced that it will charge manufacturers for including Google apps into Android. These apps mainly include the entire Google Play suite including the Google Play Store itself.

There are three possibilities, as The Verge notes it, for manufacturers to resort to:

The first option is already prominent in China. People there discredit the use of Google apps and services. The second option is a new one where users could just find an alternative to Chrome, of which, there are plenty. The third option is the one most manufacturers wouldn’t wanna go for.

If device makers plan to pay for Google’s apps, ultimately it is the users who might have to pay more for a phone than they pay now.

This, however, isn’t an aggressive change, especially considering its geographical applications. Although, this is a pretty big deal for those living in Europe. On top of that, it would be really hard for people who might be invested in Google’s apps and services a lot.

Thus, we bring some of the best alternatives to Google’s app suite to help you come in terms with their absence.

Google search, in the form of an Android app, is usually the search bar that we see at the top in most Android home screens.

It’s still there on your phone, no matter what. It’ll stay there forever unless Google shuts.

It is a really quick method to access Google’s search engine, which is the most popular search engine of all. However, removing it would just make it a little inconvenient for users to access it. Though, it’s still there on your phone. It’s just that you’ll have to go to a browser to manually access it.

Still, if you’d like to check out some alternatives, here they are: 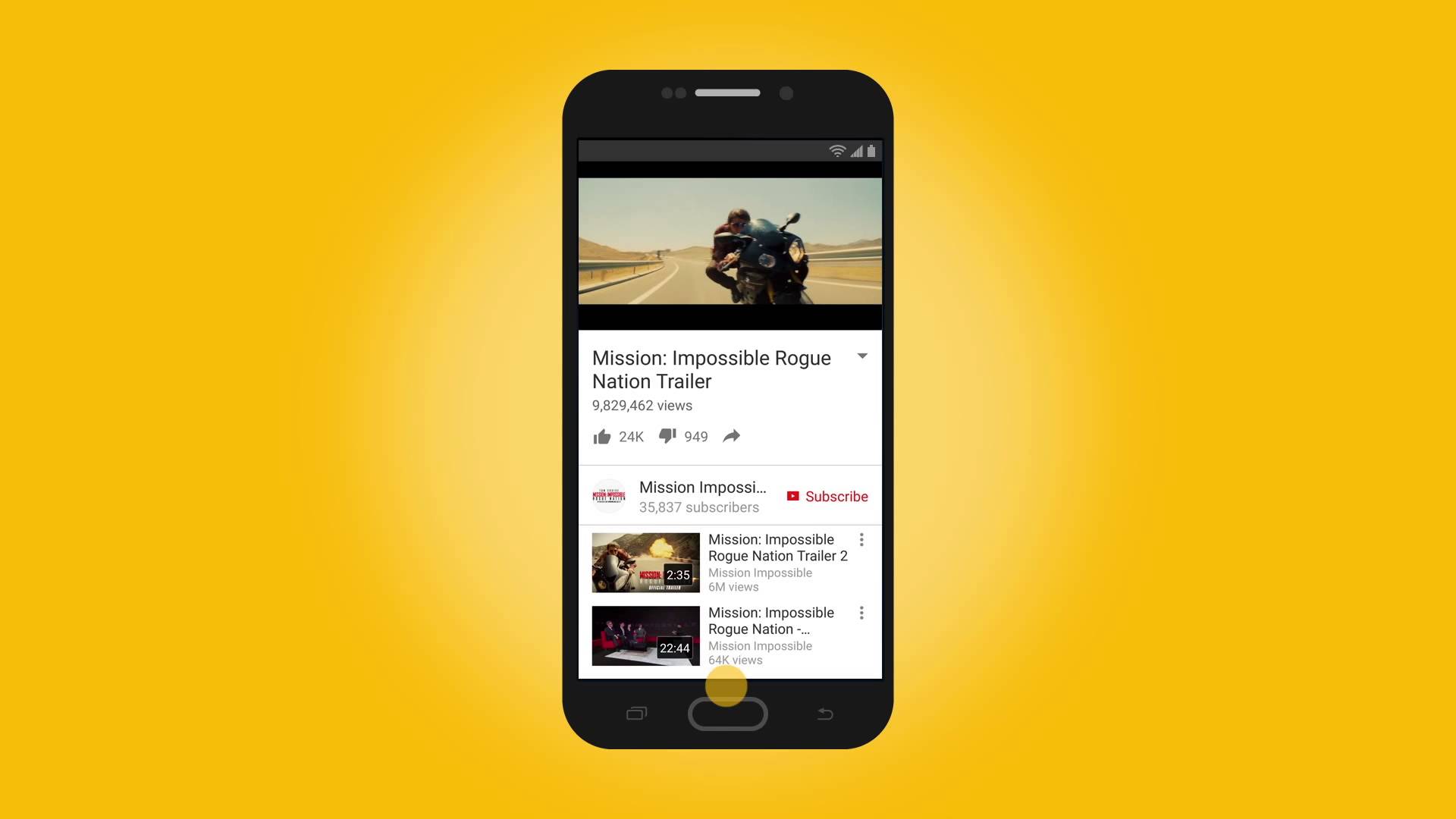 Bing is a search engine created by Microsoft. It is usually considered the best after Google’s search engine. Although it may not be as efficient as Google, it is in the same ballpark.

As an Android app, it masquerades as a one-stop-shop for anything you’d want to know. It offers restaurant suggestions, shows you things to do around the city and much more, of course- including regular search.

Aside from the mobile version, Bing is also the second choice for people on desktops. 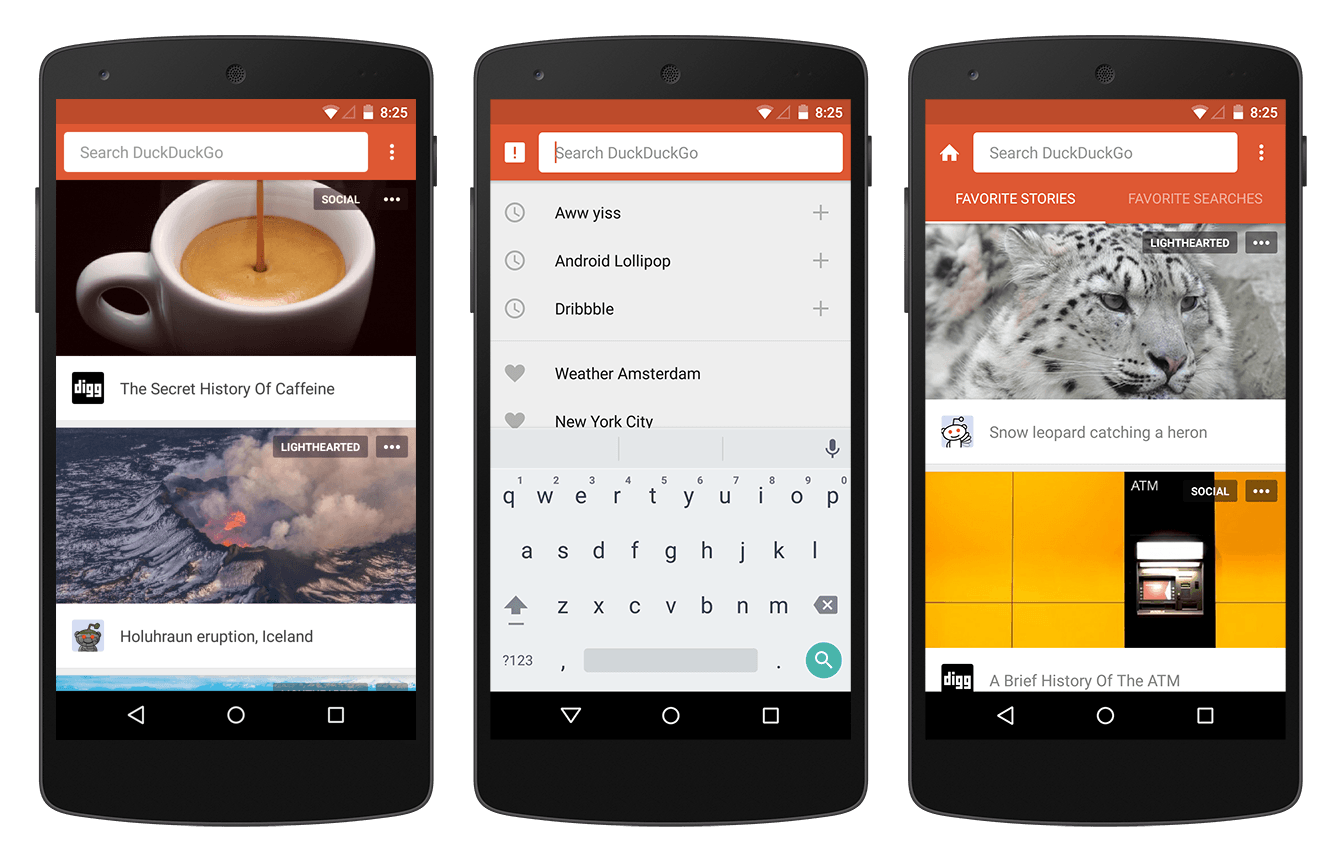 Unlike everyone in this list, DuckDuckGo torches more focus on privacy than features. It’s the search engine that’s being used by the millions of people who show up interest in Dark web. DuckDuckGo comes bundled with the infamous Tor browser that’s required to access the Dark web.

On Android, DuckDuckGo is available as an app that has a lot of limitations. Unlike most other apps as such, this one has its own browser. But it doesn’t support normal features of a browser.

For instance, you cannot open new tabs; you’ll have to work with just one tab at a time, and it also doesn’t save your previous searches. Although, you can do that manually by marking a search term as a favorite.

Once soaring in popularity, Yahoo might not be in your list of consideration, but it is, in ours.

It’s Android app is hands down, pretty. However, the search content might not be on par with the latest norms and requirements, it surely gets the work done. The app has the iconic Yahoo purple accent and displays content very beautifully. For example, the video thumbnails are displayed huge and dominant of the screen.

P.S. Did you know Yahoo is the abbreviation for “Yet Another Hierarchically Organized Oracle”?

Chrome is one of the best browsers on almost every ecosystem. It has the speed, the compatibility, the fluidness, and the support that makes it a lot better than other browsers. But it’s no harm checking out other options once in a while… 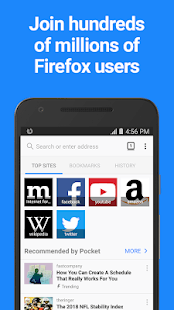 Firefox has all the features Chrome supports, although, some are even better. It has a reading mode, multiple tab support, better RAM management, and is slightly faster than Chrome.

Firefox also seamlessly syncs all your browsing data among your devices, so that you won’t have to manually enter information from one place to other. 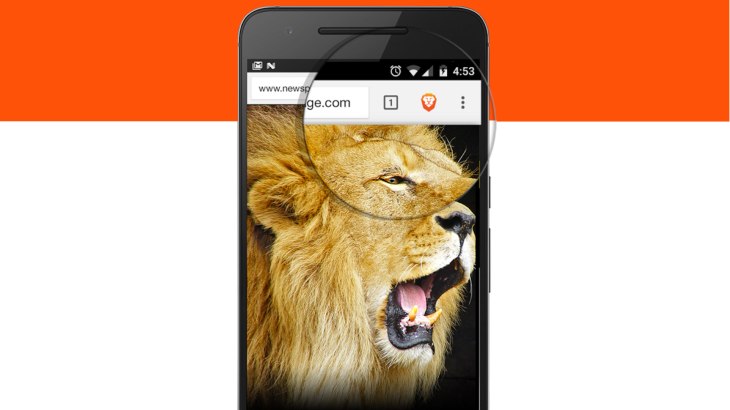 Something innovative’s always accepted, much rather celebrated by the people. And that’s what Brave’s all about.

Something innovative’s always accepted, much rather celebrated by the people. And that’s what Brave’s all about.

When it was first released, it took the smartphone browser industry by storm bringing something unique. It claimed to be faster than anyone else in the market. And guess what, it delivered. What it did was strip down additional, unrequired scripts off of websites that were too heavy. This made the websites load exceptionally faster and helped Brave to grow its roots in the market.

Now, the browser has pretty much evolved into something that is both very good for the users as well as webmasters. It’s still well known for the speed it provides. Besides, what’s new is it gives webmasters money for a certain amount of visitors to their website that they access using Brave. 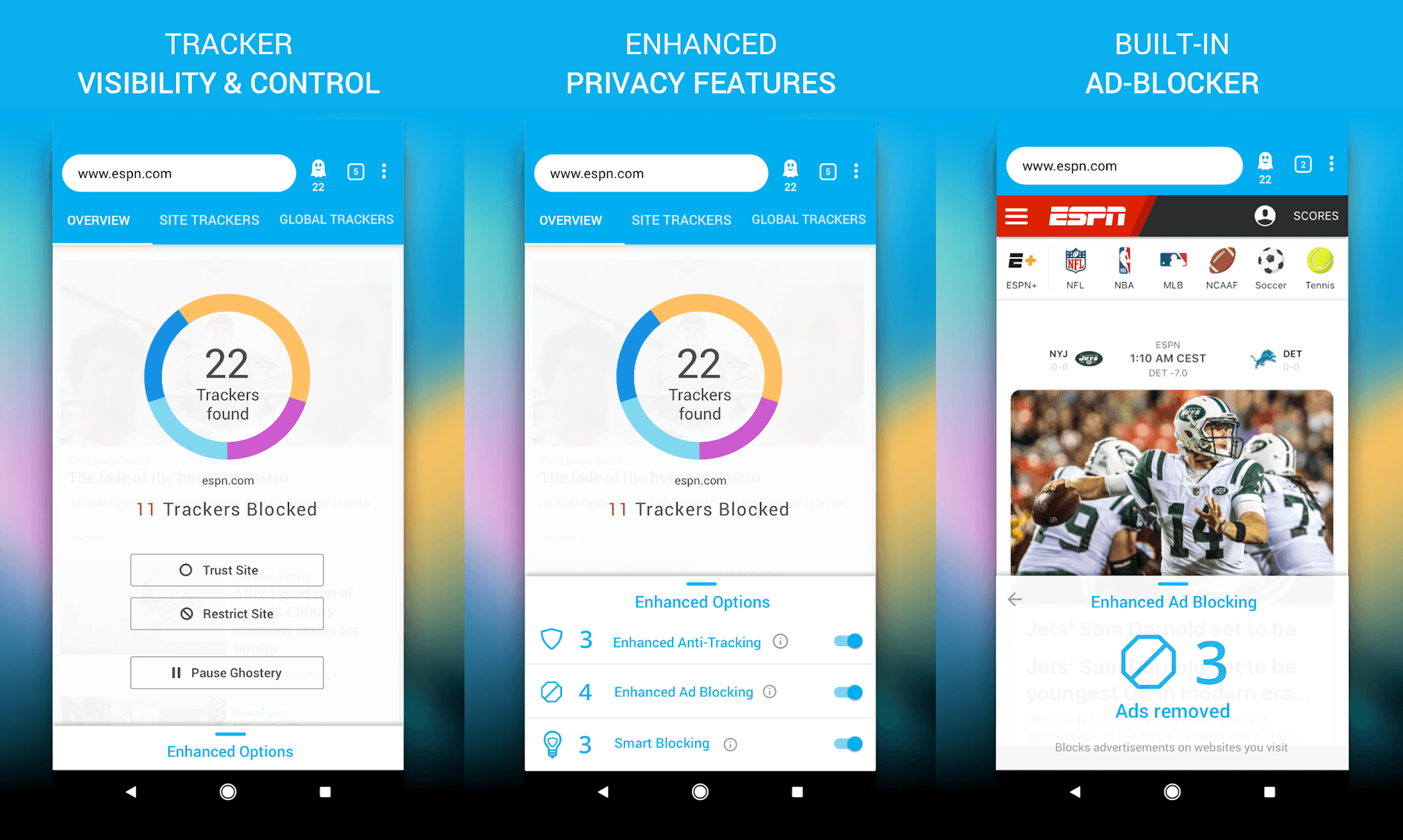 This one is for people who don’t want their impressions captured all over the internet. In other terms, this one is for “privacy freaks.”

Ghostery started as an extension for desktop browsers. But on Android, it took the form of a browser. Its highlight is that it blocks trackers all over the internet that prevent advertising and audience measurement networks from profiling you.

The people that would mostly use these browsers could include journalists and those whose work involves maintaining privacy. Ghostery can track around 2,200 trackers and 4,500 scripts, which is a staggering amount of protection if you think of it that way.

Gmail has been one of Google’s oldest possessions. It is the email app that almost everyone who has an email account uses. Earlier, Gmail only used to support emails associated with Google, which posed as a severe let-down for people considering using Gmail.

However, later, Google diversified Gmail and since then it has become one of the most-used apps. Also, this was probably because it came pre-installed with every Android device (Chinese devices excluded), and people were too lazy to check out new alternatives.

The only people who consider an alternative are those who use email on a daily basis. 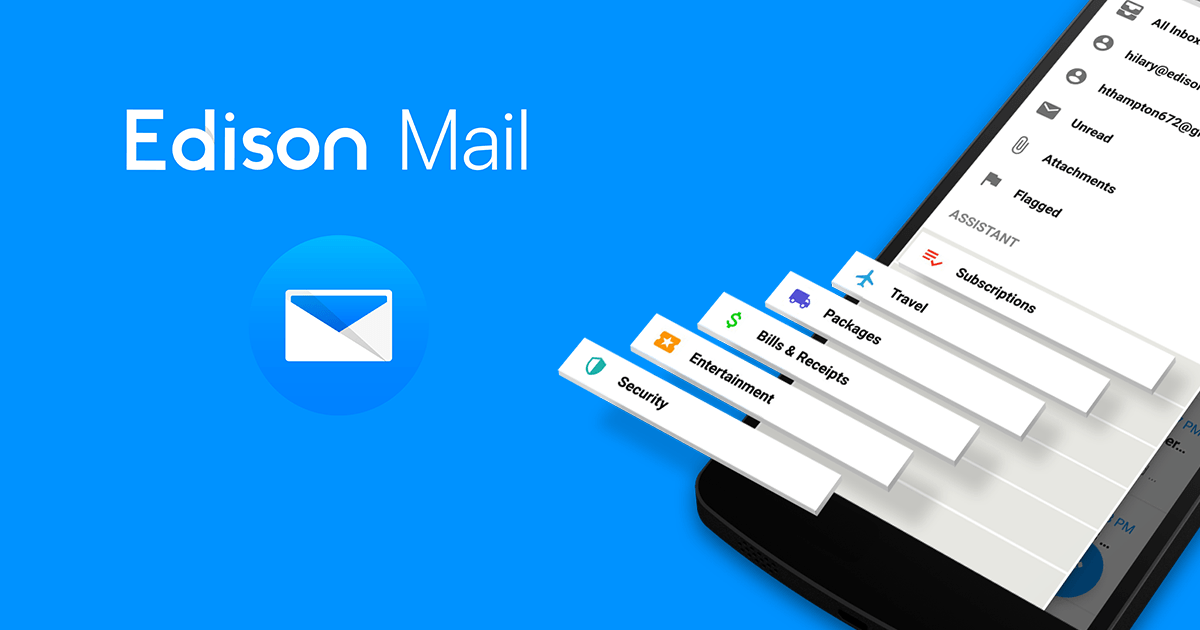 Email By Edison, also called as Edison Mail has a long history of staying on the top charts. This is mainly due to the features it offers. More than that, it’s exceptionally reliable.

At the surface, it has a fairly simple design. I mean you won’t be going heads over heels for this app just by looking at its design. What is inside is what matters. Edison mail allows management of unlimited email accounts at a time, offers unparalleled speed and offers a built-in assistant that helps you manage your emails easily.

Moreover, the app gives out real-time travel notifications, has configurable swipe controls and much more. 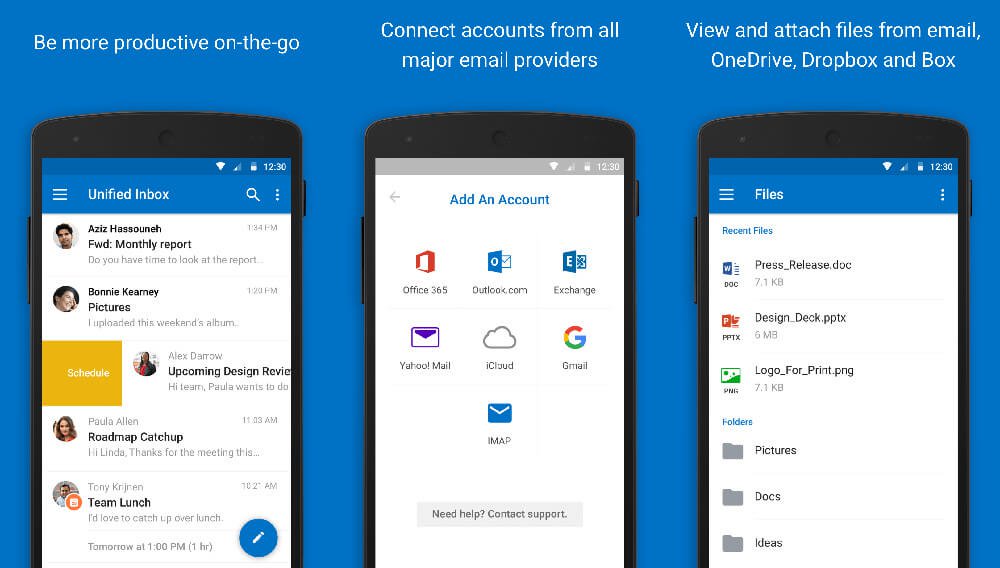 This is hands down, my favorite email client. Not only it has the best-in-class features but also has the most minimalistic design ever in an email app.

It doesn’t have many options in terms of email providers, but if you have a Google account, a Microsoft account, or a Yahoo account, it works exceptionally well. With Outlook, you get fluid swipe functions and many other options you can customize in the settings.

Turns out Microsoft didn’t fail to create apps as much as it did making entire smartphone families. 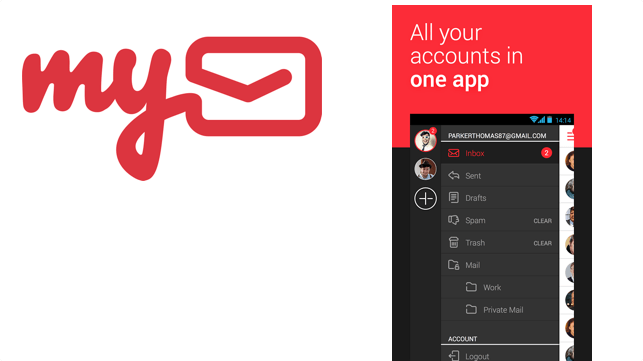 I’ve reviewed this app before, and I must say that even though it isn’t that prominent today, it still features some of the best settings you would like in an email app.

myMail focuses a lot on design. Yes, it handles email pretty well too. But its expertise is in presenting emails rather than, let’s say, displaying them. Although, it’s not that hard to note that the app crosses the line a bit in terms of design, which makes it look like an email app for kids.

Apart from the design, it offers many options that allow curation of emails sorted by importance. You can sign in using a variety of email services and label them using color.

Although Google Assistant doesn’t come as an app on most Android phones, there’s a high chance that it could be swept away along with the other apps in Europe since it is a Google service. It’s not clear yet, though.

Google Assistant came out as a hit, probably because people were fed up tolerating Siri’s occasional tantrums.

Google Assistant came out as a hit, probably because people were fed up tolerating Siri’s occasional tantrums. Albeit, it evolved over time and perfected itself to be claimed the perfect assistant ever on a smartphone. However, it’s not clear if that is the case, yet. 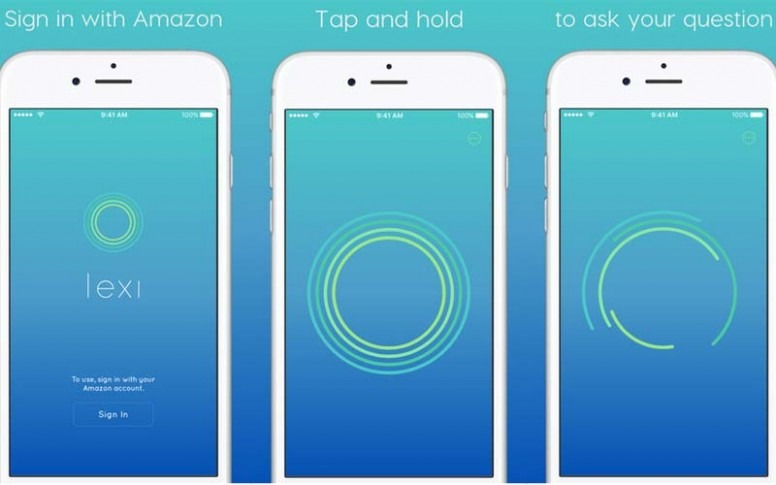 Google Assistant’s major rival and probably the best out there, Alexa is a virtual assistant that’s prevalent in 12,000 smart home devices and an unknown number of other devices.

The point is, you probably won’t get anything better in the market than Alexa. The problem here, though, is that it doesn’t concert with devices other than those made by Amazon itself. For instance, Alexa won’t give you personalized information, work with what’s currently on your screen, or else. But, it’s a must-have if you own other devices in your house that work entirely on Alexa.

That brings easy control over the smart devices.

This may come as a major shock to you, but please find a place to sit first (If you live someplace in Europe).

Since YouTube has been and is a major part of Google’s app bundle, it can also be feared to be a part of the paywall Google has decided to put up to reconcile with the terms set by the EU commission. This means no more YouTube on your Android phone.

Although, not all’s lost. You can still use a browser to watch YouTube on your smartphone.

It’s not yet clear if these apps would be downloadable from app stores not owned by Google. Although, Google might challenge the EU Commission’s decision in the court which could overturn the decision. I have my fingers crossed!