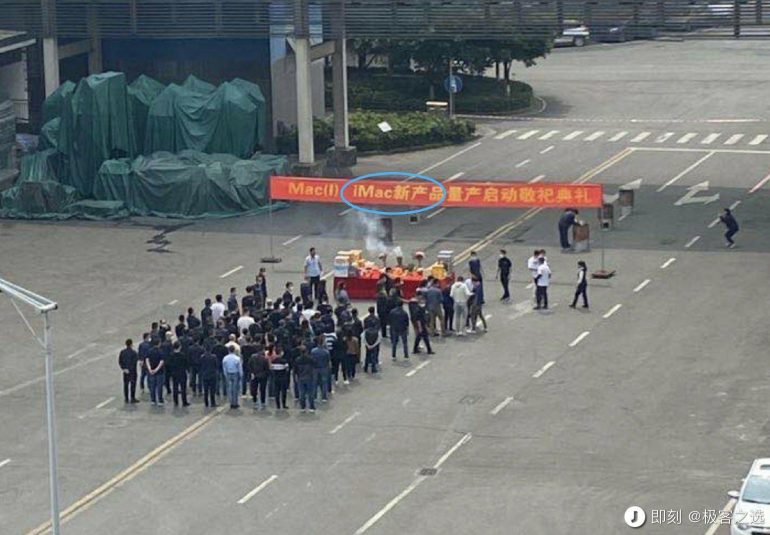 Warning: One of the images within the tweet link in this article contains content that may be unsettling for some viewers.

A bunch of photos has emerged showing some people attending a ceremonial setup. Those are supposedly Foxconn employees attending a launch ceremony as the company looks forward to initiating mass production of Apple’s ARM Macs, as per leaker Mr.White on Twitter.

Mr. White is credited with recently leaking images of Apple’s braided USB-C to Lightning cables that will ship along with the upcoming iPhone 12 lineup.

Today, he shared a bunch of images in which apparently Foxconn’s employees are seen attending the launch ceremony for the mass production of Apple’s upcoming ARM Macs.

There’s a label above the ceremonial set up that contains the words “Mac” and “iMac” in English. The rest of it is in Chinese. The whole text translates to “Mac (l) iMac new product mass production launch ceremony.”

This comes after reports of Apple’s 5-nanometer-based A14X processors entering mass production emerged earlier this month. The tweet mentions that these are Foxconn employees that are attending the ceremony. However, Foxconn isn’t tasked with manufacturing processors for Apple products; that would be TSMC. But the company does produce other Mac components.

When asked about what the images exactly featured, Mr. White implied the ceremony was for Apple’s upcoming ARM Macs. It shows the amount of hope they put into developing the Macs that we all love to use.

This gives light to the fact that Apple has started producing its next-gen Macs in full-scale, and not just the processor. It’s also interesting to see workers infusing traditional customs with manufacturing MacBooks.

Apple has also been criticized by workers with poor working conditions and exposure to noxious chemicals in the past.

Apple is expected to announce new MacBooks with custom-built 5-nanometer-based A14X chips sometime in November. The new processors from Apple will be ARM-based and will offer significant performance and efficiency gains over current Intel chips.