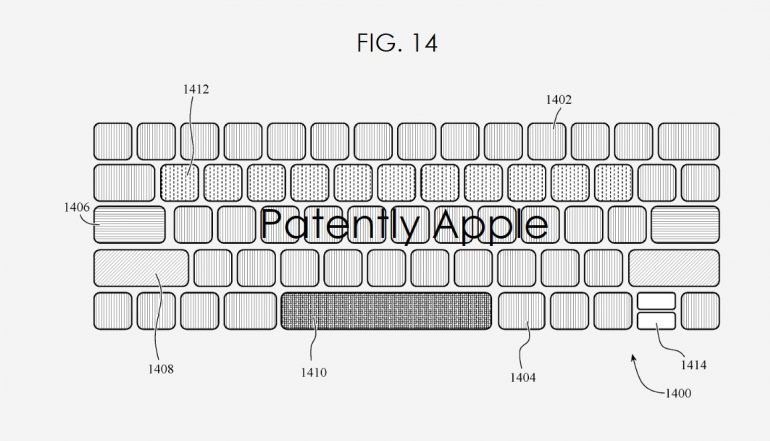 Apple may be planning to revolutionize how your MacBook keyboard responses to your touch by allowing you to customize how it ultimately feels. You may be able to do that by tweaking the keyboard’s tactile feedback, force, and what sound it makes.

First noted by PatentlyApple, according to a patent that Apple filed in Q2 2019, which was published on September 27, Apple suggests that keyboards and other input devices contain certain mechanisms with specific components that are capable of providing adjustable feedback in response to user input.

Apple has had a rough recent history with its Butterfly keyboard mechanism being criticized by users, professionals, and even filmmakers. Although Apple has switched back to the scissor-switch keyboard mechanism in all of its latest MacBooks, it’s the same mechanism that was used in MacBooks prior to 2016. The only difference now is that the latest MacBook scissor-switch keys have a 1 mm travel instead of 1.3 mm previously.

Apple ended up back to square one while trying to improve the keyboard typing experience. The new Magic keyboard, which is Apple’s moniker for the upgraded scissor-switch mechanism underneath, garnered positive reviews and people are finally happy. Despite the fact that people simply want their keyboard to work as intended when they, say, press a key; progress is due.

If Apple at all brings the keyboard technology mentioned in its patent to the market, it won’t only be convenient, but also revolutionary.

This patent, moreover, has a chance to flourish into a full-blown product. It’s because Apple filed a similar patent in 2012 for its proprietary pressure-sensitive screen technology we all eventually came to know as 3D Touch. The new patent mentions similar technology. Moreover, if we compare it to Apple’s wild patents (ones that seem to have no chance of materializing), you’ll notice that the new patent makes sense and actually has a chance of materializing into a product.

That said, patents are, after all, patents. Apple registers a lot of patents and only a few turn into products that sell in markets.

How will the new keyboard mechanism improve typing?

Apple, in its patent filing, notes that even though device makers develop products keeping in mind multiple use cases, it’s often not comfortable for all end-users. The Cupertino company believes this is especially true for keyboards.

Although manufacturers keep innovating the field of physical keyboards by tweaking the size, shape, and ergonomics of keys, the end result remains the same—it’s a keyboard that you type on. There isn’t enough innovation.

The current keyboard typing scenario in the market is quite generalized. Comfortable key feedback for one, for instance, does not mean the same for another. It’s difficult to provide everyone with a unique experience tailored to their specific needs. Apple’s aiming to change that with this patent.

Keyboards use actuators coupled with keycaps to provide feedback to the user when a key is pressed. The actuator can be tweaked to offer different feedback configurations that affect the output of the sound the key makes.

Apple has previously used a similar mechanism involving piezoelectric actuators in its partially-defunct 3D Touch feature to measure the pressure put on the screen by a fingertip and help offer feedback. Similarly, using a combination of actuators and other components, Apple could essentially bring force touch to the MacBook keyboard. The trackpad on MacBooks already functions according to this mechanism—it doesn’t actually click; rather, it gives you a feeling that you’ve clicked it by providing tactile feedback.

If this technology extends to the keyboard, users who need keyboards with quieter keys could adjust the keyboard accordingly by configuring it in macOS itself. Similarly, those who crave louder keys will be able to set their keys to make a louder sound when pressed.

Moreover, Apple could also not let users take control and itself offer preset operational feedback that it deems fit for its MacBooks. Then, as Patently Apple notes, it’s upon the end user’s perception of quality and key feel.

The patent also mentions that users will be able to actively choose between multiple feedback configuration profiles. This means that if you’d want your keys to be louder during the day while you’re working, you can choose, say, the first configuration profile that is set to feature louder keystrokes and solid tactile feedback.

Similarly, you’ll be able to choose the second feedback configuration profile featuring quieter keystrokes for times when you don’t want to distract yourself or disturb anyone around, or also while playing games.

The patent further mentions that you will also be able to customize individual keys or a group of keys to fit your needs. For instance, if you’d want to set different tactile feedback for different keys depending on which fingers you use to hit each key, you’d be able to do that. This means the keys that your index finger hits will provide different feedback than keys that you press with your middle finger.

All of this means that a MacBook keyboard won’t have actual, physical keys. They’ll be pseudo-keys just like the one Apple first implemented in the iPhone 7’s home button.

That said, what if you accidentally press the adjacent key while pressing a key that you’re intended to? Apple has also offered a solution to that. A controller connected to the encoders or other sensors for each key will be able to detect which key you actually intend to press.

As Patently Apple notes, using force sensors, a controller will be able to decide which key you intended to press judging from the amount of pressure applied on the intended key and its surrounding keys. So, for example, you intended to press the “F” key and most of your fingertip’s pressure was applied on it, but also accidentally pressed the “G” key beside it, the system will know that more of your fingertip’s pressure was applied on “F” and will register that instead of the latter.

As I’ve mentioned, patents like these emerge every other day. However, this patent has the potential to end up being an actual functionality in MacBooks one day.

However, it’s still a patent, and only Apple can tell if it’ll ultimately include it into future MacBook models.

Apple, it seems, is opening up to letting users customize their devices to some extent. iOS 14 is a prime example of that notion of mine. You can customize your home screen and finally add widgets to your home screen, which is something users were not allowed to since the advent of the iOS operating system.

What do you think about this improved keyboard functionality? Would you want a MacBook with force touch, customizable keyboard? Let us know in the comments below.