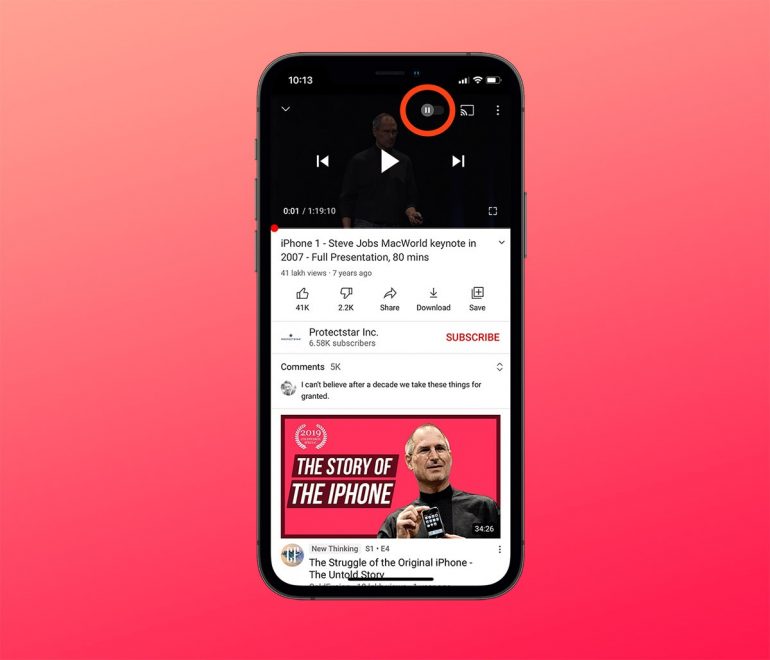 YouTube released an update two days ago which streamlines the viewing experience and also the way you interact with your videos while watching them. In this story, we share what’s changed and how to use the new features in all their glory.

YouTube is an essential app for most people. It’s one of those apps that everyone downloads when they get a new iPhone. The video-sharing app’s history with iOS has been of a love-hate nature. YouTube use to be one of the default applications that came pre-installed on an iPhone back in 2012 until Apple kicked it to the curb. Since then, users have only been able to install the app as a separate download from Apple’s App Store.

The new set of features that YouTube revealed recently bring advanced improvements to the viewing experience and also brings a more streamlined video page. Here’s YouTube’s blog post describing the new features. Here is a summary of the new features mentioned in the blog post:

How to view chapters of a video in a list view?

YouTube introduced the Video Chapters feature back in May. It’s a handy feature that allows viewers to skip to a specific chapter (provided the uploader has uploaded the video with chapters), enabling them to better navigate through the video.

This feature on desktop appears perfect and is also quite helpful. It lets you scroll your cursor through the timeline to reveal titles and thumbnails of different chapters so you know what to expect and can jump directly to that chapter.

Up until now, iOS and Android users had a similar way of accessing Video Chapters on mobile. However, it wasn’t specifically designed for a smartphone’s user interface. Thankfully now, with the latest update, YouTube displays chapters on iPhone and Android in a list. Accessing that list is quite simple:

The best part about this feature is that the list view also shows thumbnails, which offer better insight into what you’ll be seeing further in the video so you can choose better and save your time.

How to turn AutoPlay on and off in YouTube’s latest update?

AutoPlay on YouTube can sometimes be a bitch. Previously the AutoPlay switch in the YouTube app for iOS and Android was placed beneath the video player. However, in the latest update, YouTube has shifted the AutoPlay right on the video player so that it’s easily visible and, by extension, easily accessible.

So, if you cannot find the AutoPlay button, rest assured that it’s still there. It’s now located within the video player at the top beside the menu button. Thanks to the relocation, it’s now easier than ever to bar a video from playing automatically. All you have to do to turn AutoPlay off is tap on the toggle until it shows the pause icon. Simply tap on it again until it shows the “play” icon to enable AutoPlay again.

How to toggle between elapsed time and remaining time indication on YouTube’s updated player?

YouTube now lets you toggle between elapsed time and remaining time indicators within its player. It’s quite simple to do that. Simply tap on the time indicator and it’ll switch.

How to use gestures to toggle the full-screen video player

A striking discrepancy between the YouTube app on iOS and Android has been the video player. YouTube’s iOS app has long had the ability to pinch on the video player to make it full-screen, while Android users have been devoid of that.

With the new update, not only is YouTube unifying the video player experience across both platforms but also introducing a new gestures to interact with the video player.

After updating the YouTube app on your iPhone and Android device, simply swipe up on a video to enable the full-screen player and swipe down to disable it.