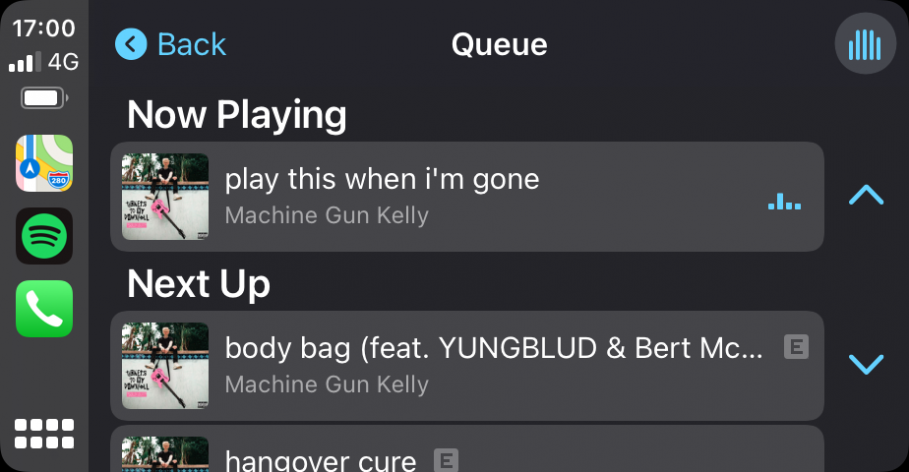 The latest TestFlight beta of Spotify includes support for displaying a queue of songs within the CarPlay app, as reported by Reddit user u/GameOverRob.

In the latest beta, when a song is playing, users can now tap “Go to queue” on the upper-left corner of the CarPlay screen to view upcoming songs in a queue. This is especially useful for skipping a certain song in a playlist or avoiding repeated tracks.

The queue itself displays the current playing song under the “Now Playing” label while upcoming songs are displayed under the “Next Up” label. There are two buttons on the right to navigate up and down the queue and users can tap on any song to play it within the queue.

Apple Music has had a queue functionality within CarPlay for a long time now. Spotify users have been waiting for the music subscription app to introduce this feature for a long time as well as is evident from the discussions in Spotify’s community forums.

According to one user in the forums:

“It’s super annoying that I have to pick up my iPhone while I’m driving to see if I need to re-shuffle because the next 8 songs I’ve played out. Additionally, I can’t see the queue on my apple watch series 4 either. This seems to be a core function for integrated features that was overlooked. It’d also be great if you could see all the songs in a playlist instead of just the current track… I’m really getting close to switching to apple music, as much as that distresses me to say, as I like the Spotify catalog better because I listen to mostly obscurity.”

A lot of users—especially those who commute a lot—will benefit from the new addition. The update is a part of Spotify’s TestFlight beta version 8.5.93 and users who are approved for the beta can try it out for themselves.

It’s unclear exactly when Spotify will release the ability to view songs in a queue on CarPlay for the general public, but it, being available in beta is certainly an improvement on the matter.

Stay tuned to The 8-Bit for further updates regarding Spotify’s latest CarPlay feature.