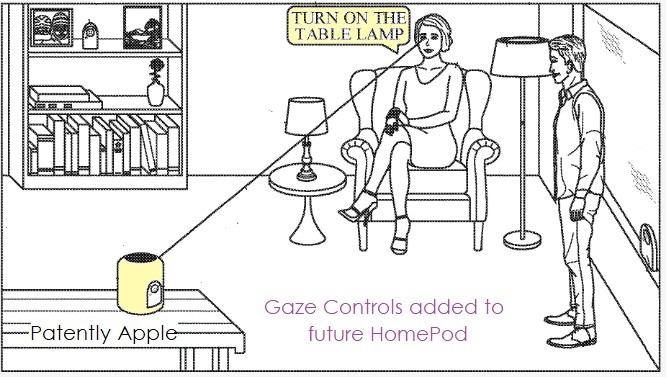 Apple has recently won a patent demonstrating a future HomePod’s capability to come with a built-in camera system with gaze controls using long-range FaceID, according to PatentlyApple.

Current HomePod models feature advanced voice detection, meaning your HomePod knows who’s commanding it at all times. Siri is the engine that drives this voice recognition. Although, a future HomePod with gaze detection could definitely up the game, making it more secure and convenient to use.

Instead of relying on sound, a future HomePod could easily detect the person speaking to it even from afar. PatentlyApple notes that the cameras on the HomePod depicted within the patent could capture the gaze of a user to perform a task such as turning on a specific lamp in the room containing multiple lamps.

The patent mentions that the HomePod could sport one or more depth-sensing cameras that would create a 3D model of objects around it from a certain viewpoint.

If the Cupertino tech giant decides to pursue this course for the HomePod, it will likely bring along some implications. First off, it would potentially be the first smart home speaker with a camera. Although there have been other smart systems that involve a camera, the traditional smart home speaker has never featured one.

The second implication—and probably the biggest one— would be privacy. Apple is often renowned for its privacy practices and implementation of its privacy policies. The company is also asking developers to include an app privacy report right on individual App Store pages. But having a camera record your movements and track you every time you appear is different from an app tracking you online. This means that Apple will need to implement extra security features to convince people to get on board with the idea of a HomePod with FaceID.

Nevertheless, it’s worth noting that it’s simply a patent. Apple files dozens of patents each month and very few turn into actual products each year. So, don’t get excited.