You will finally be able to charge your phone wirelessly using a Laser! 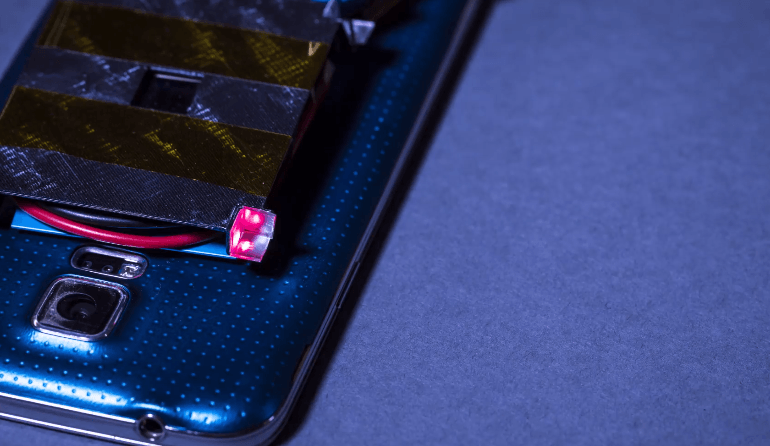 Owning a smartphone is good. But, having to charge it time-to-time is kind of a physically boring task. It is not the idea of charging itself that bugs us but to have to physically plug in a lightning cable or a USB-C cable is kind of tiring. Well, it is admissible if you’re doing it one time a day but it sure gets out of bounds when you have a phone that won’t last even a few hours.

Although, it seems that a team of researchers at the University of Washington might have found a way to our lazy enigmas. They have discovered a new way of charging a smartphone, which includes discharging laser beams on your smartphone. These laser beams point laser rays at a thin power cell attached to the back of the phone. Although this kind of system can be detrimental to the phone as well as the people walking around.

But, the researchers have contrived to fit in a flat-plate heatsink on the smartphone which acts as a heat dissipator dissipating heat from the high-intensity laser beams. Additionally, they have incorporated a reflector-based mechanism into the setup that shuts off the laser beam as soon as it detects anyone trying to intersect it.

The mechanism behind the laser beams shutting themselves off at the time of a human intervention is quite appealing. A low-intensity beam invariably looks out for trouble and reacts almost at the speed of light leaving no room for error. Although, to err is human. Thankfully, the machines understand its meaning well.

Here’s what Shyam Gollakota, associate professor at the University of Washington in the US explained:

“We have designed, constructed and tested this laser-based charging system with a rapid-response safety mechanism, which ensures that the laser emitter will terminate the charging beam before a person comes into the path of the laser”

But, here’s the great deal about all of this. The laser beams charge your phone at the same rate as a USB cable would do. A narrow beam can provide 2 watts of power to a 15 sq.inch area from a distance of up to 4.3 meters or about 14 feet! Additionally, the emitter can be modified to expand the radius of the charging beam to an area up to 100 sq.cm from a distance of 12 meters or roughly 40 feet.

This means that you can set your phone to charge wherever you want unless it’s not in the radius of the emitter. Researchers discovering this method does not mean it would be launched to the market in a few months, or even a few years. Implementing this technology can (and probably will) take some time. Stay tuned in the meantime!