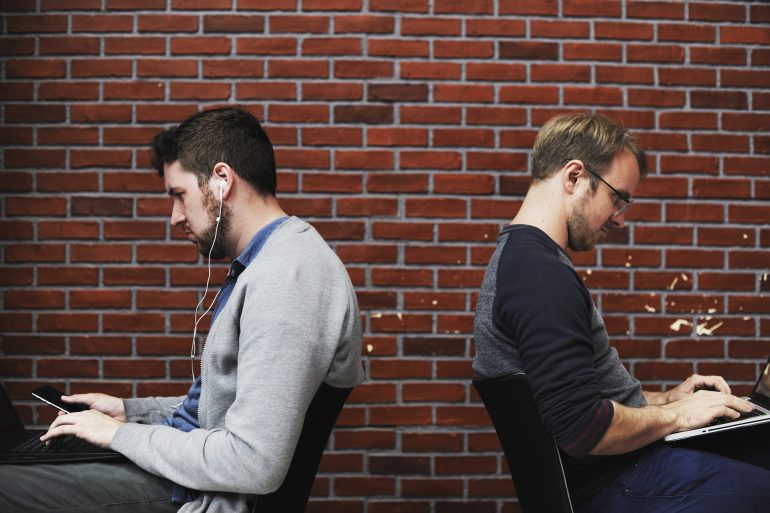 Productivity comes at a cost, believe it or not. You could spend your entire life trying to get better at doing productive stuff and yet reach nowhere. The thing that enables us as humans to fail at productivity is the inertia of being productive itself. For the first few days of a new task you begin, you’ll splurge as much productive energy you can. But after some time passes, you’ll slowly give in to the inertia- not caring about how organized the task needs to be.

Although, smartphones by themselves aren’t capable of doing anything, let alone help you be productive. It is apps that deem them proficient. When Apple and Google first started supporting third-party apps into their respective ecosystems, there was a huge requirement of apps that de facto eased up every aspect of a task people did at that time; apps that helped people perform tasks productively.

And these kinds of apps is the reason the idea of having a smartphone in your pocket became successful in the first place. Today, most productivity-focused apps use advanced technologies such as artificial intelligence, augmented reality, machine learning, neural networking, etc. to ensure perfect execution of even the most cryptic tasks. And above all, automation has made working on any project a breeze. Even better, we’ve reached an era where smartphone makers construct a processor specifically focused on neural networking. (I’m looking at you, iPhone XS).

That said, take a look at some iPhone and Android apps that are simple, yet ease up the most giant tasks in the name of productivity. 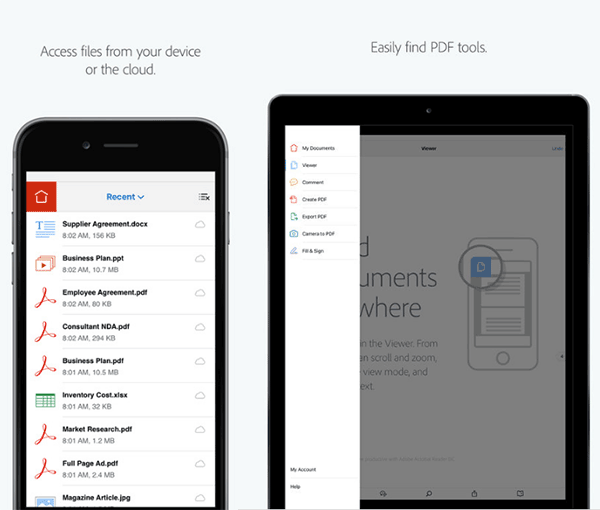 A huge part of running a business or doing a job is to deal with a lot of PDFs. Almost any information shared between two people in the corporate world is exchanged in PDF formats. But, you must know that no device ships PDF-ready out of the box. You’d have to install software/apps to make the PDF format compatible for reading and creating. And what’s better than the king of PDFs?

Adobe Acrobat has been in the PDF business for a long time now, and it’s safe to say that its iOS and Android app is one of the best PDF apps available in the respective app stores. Unlike most apps, Acrobat uses Adobe’s own cloud platform to sync all of your documents. That eliminates the need to club other cloud services- saving you the hassle. Speaking of the hassle, you can easily import documents from various cloud services and similarly, export them.

Besides, the app also lets you annotate, sign, and comment on documents quite intuitively. And the cloud connectivity means that you can easily switch to the Acrobat app on your desktop/laptop and work on your documents. Very few apps provide that, which makes Adobe the best candidate for PDF-related tasks. 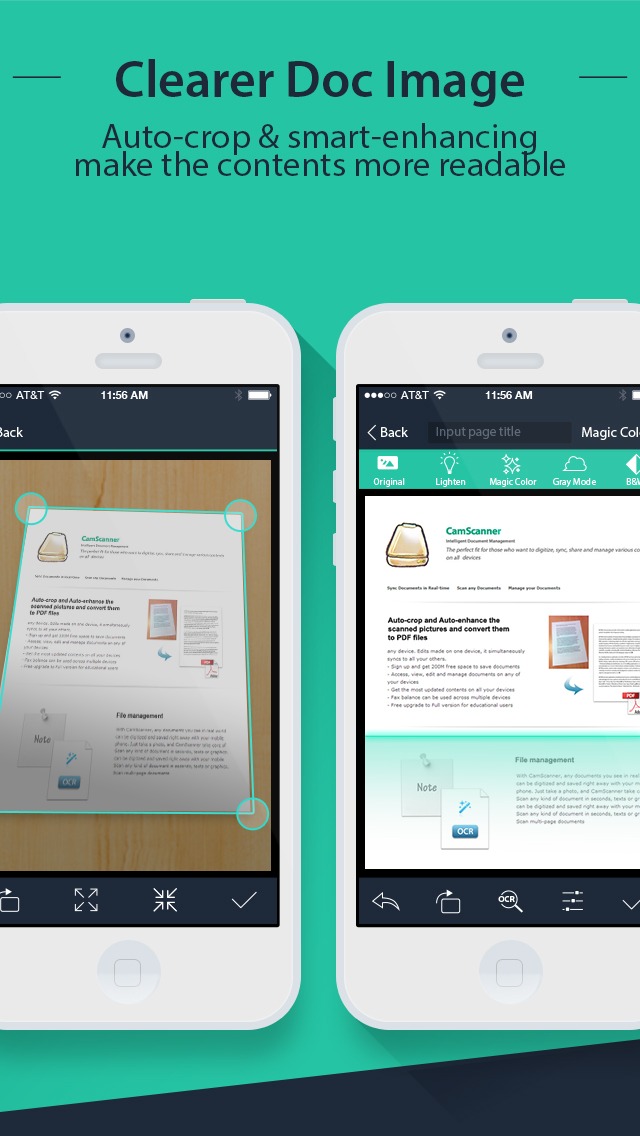 A lot of you guys might be knowing about this app beforehand. It was one of the very first apps that brought about an inception of document scanning apps on iPhone and Android. Initially, people were very excited by the idea that they could do a task that requires a comparatively huge scanner on a device several times smaller in size.

With CamScanner, not only you can snap images of documents, but also edit them later to fit different scan styles. Personally, I prefer the “Magic” scan option which magically converts any document into a white paper. I vaguely remember instances when I’ve shown how CamScanner works with scans to my friends in college and watch their faces drop in awe. Also, just like Adobe’s Acrobat, CamScanner goes with its own cloud service which enables you to save all your documents on one device and work on them on another.

I really love what CamScanner’s done to my documents, and I’m pretty sure you’ll love it too. There are other apps that do the same thing, but CamScanner so far has been pretty easy to use and been the most precise document scanner. 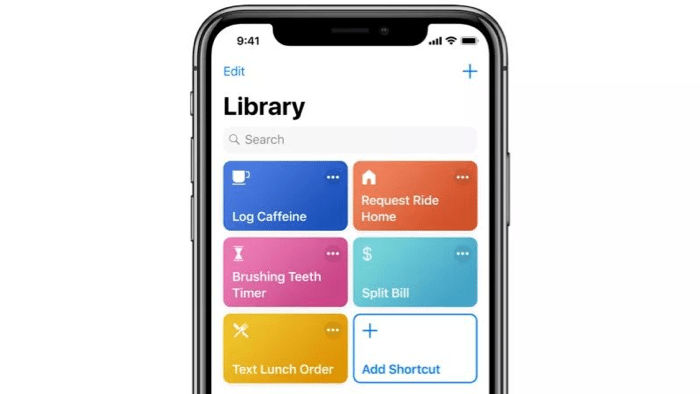 Shortcuts was initially Workflows until Apple acquired it. It was a great app that allowed you to automate tasks that you do on your phone, thereby saving a lot of time. Now, since Apple has acquired the app, it has only gotten better. With Siri support and total customization allowance, tasks can be performed more intuitively now than ever before.

The addition of Siri is the biggest positive change to Shortcuts. With it, you can easily assign catchphrases to your tasks to set them into action. For example, if you create a shortcut to turn on do not disturb mode along with low power mode and reduce the device brightness when you say the phrase “I’m Busy” to Siri, the iPhone will automatically perform all the tasks in order, saving you further bickering.

Shortcuts ships with iOS 12 and so far I feel that Apple yet needs to do a ton of work on the app to hone it to perfection. There were several instances where the shortcuts straight off didn’t work. The ones that did, were too slow to perform the task. Also, the Siri integration is great, but Apple should’ve allowed catchphrase customization in the Shortcuts app itself instead of placing it deep inside the device settings.

If anything, this is definitely a must-have app for iOS users on iOS 12. 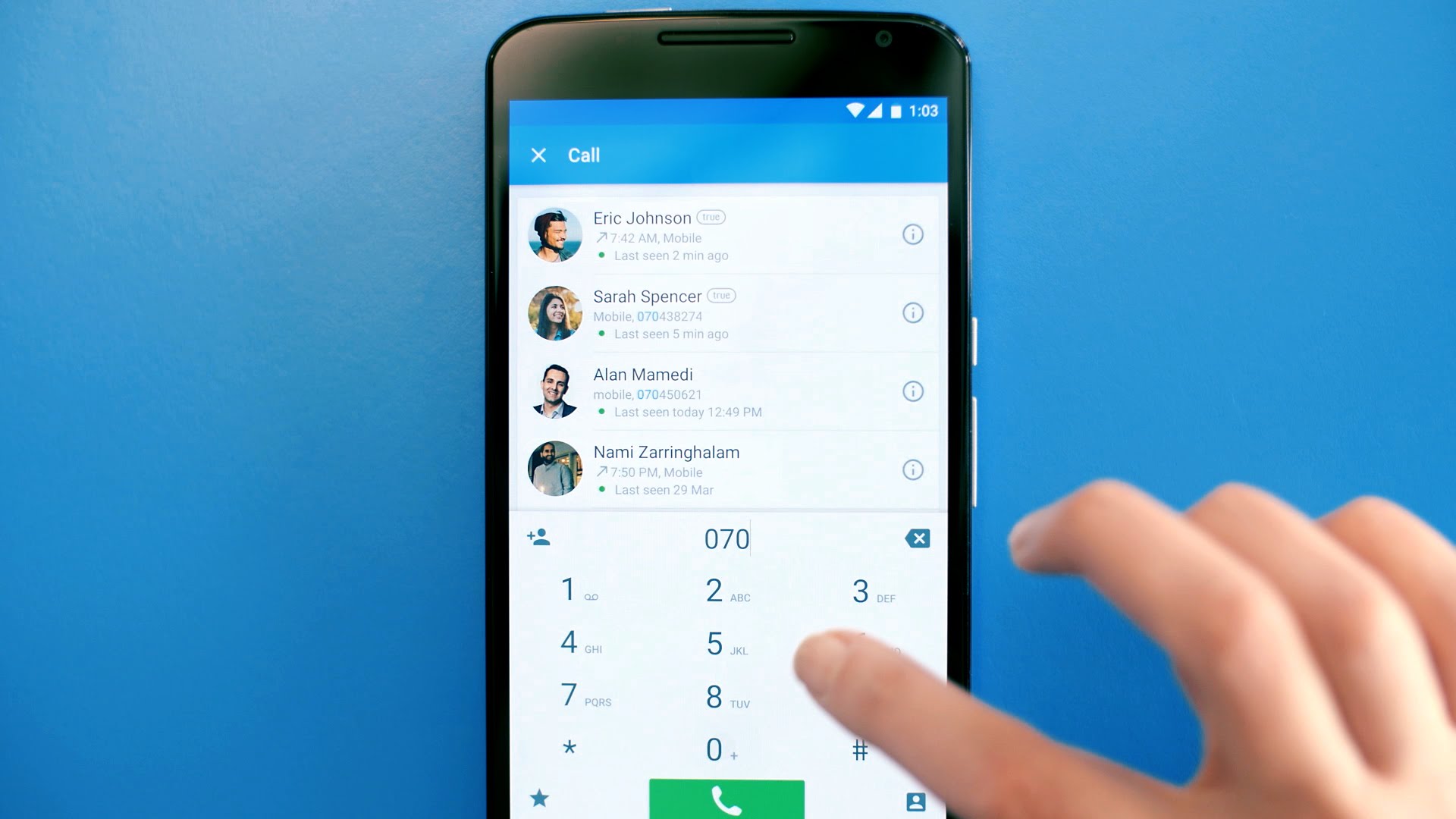 It seems we’ve forgotten what smartphones were initially intended to do- call. Undoubtedly, much like surprisingly, there are people who still prefer to call using the standard call function instead of VoIP. Although, unlike internet calling, standard calls don’t extend their functionality. Over the years since the launch of the first iPhone, there have been no advancements in standard calling, except for sound clarification.

Truecaller, thankfully, is a revolutionary app for users who still pay for talk times. What it does is, whenever you get a call from an unknown number, it identifies the number (or at least, tries) and displays the name of the person calling. Additional features include spam protection which is on point.

Truecaller is a crowdsourced app that allows users to flag spam calls by themselves which makes it kind of a reliable source. Albeit, I feel Truecaller isn’t as profoundly inculcated in iOS in comparison with Android. On the latter, you get full-screen calling support which is far better than just a notification before a call on iOS.

Further, I don’t know about other countries but Truecaller has a peer-to-peer payments service in India in the app itself, supported by the country’s Unified Payments Interface (UPI) payments system. 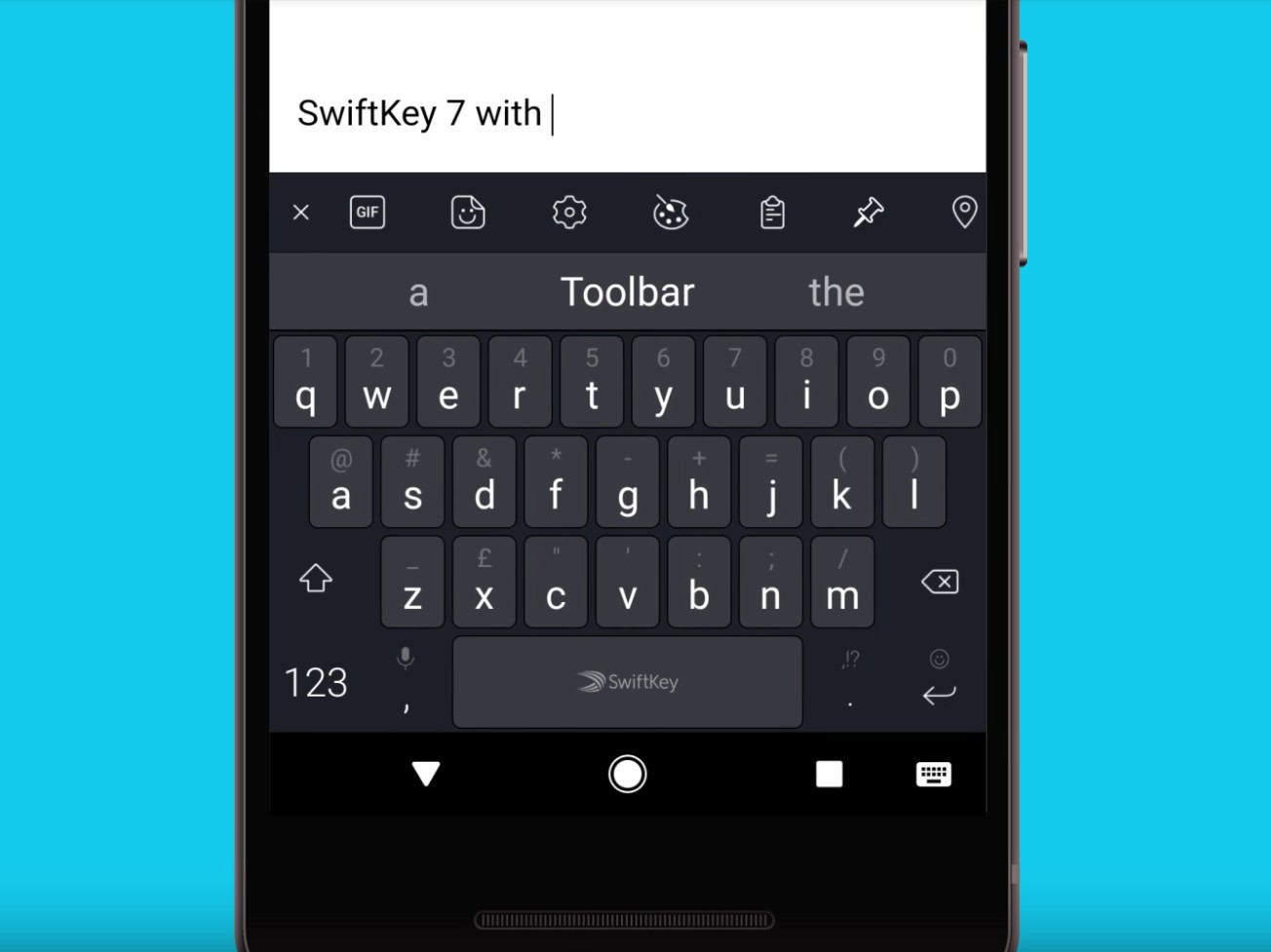 Since Microsoft’s acquisition of Swiftkey, the keyboard giant has become more personalized, snappy, and reliable. Swiftkey is a famous third-party keyboard app that has become a standard for most smartphone manufacturers. For instance, Huawei’s smartphones now ship along with Swiftkey pre-installed and as a default keyboard choice.

Well, Swiftkey deserves such attention. Its cloud-based typing helps you switch devices and not lose your style of writing. There are multiple keyboard themes you can choose from- free and paid; you can also create your own theme using an image as a background.

One more thing that Swiftkey is widely known for is its swipe typing. If you are an iOS user, you might know that Apple doesn’t offer swipe typing on its default keyboard. You can always use Swiftkey for that. Also, Swiftkey just recently gained 3D touch functionality on the iOS version of its keyboard, allowing users to easily select and manage text. However, there’s one drawback…

Whenever Apple releases new emojis for the iOS keyboard, for some reason, there’s always a delay in Swiftkey bringing those emojis to its own keyboard. And this kinda makes you feel left behind at times. Although, Swiftkey on Android is as best as it can get. Undoubtedly! 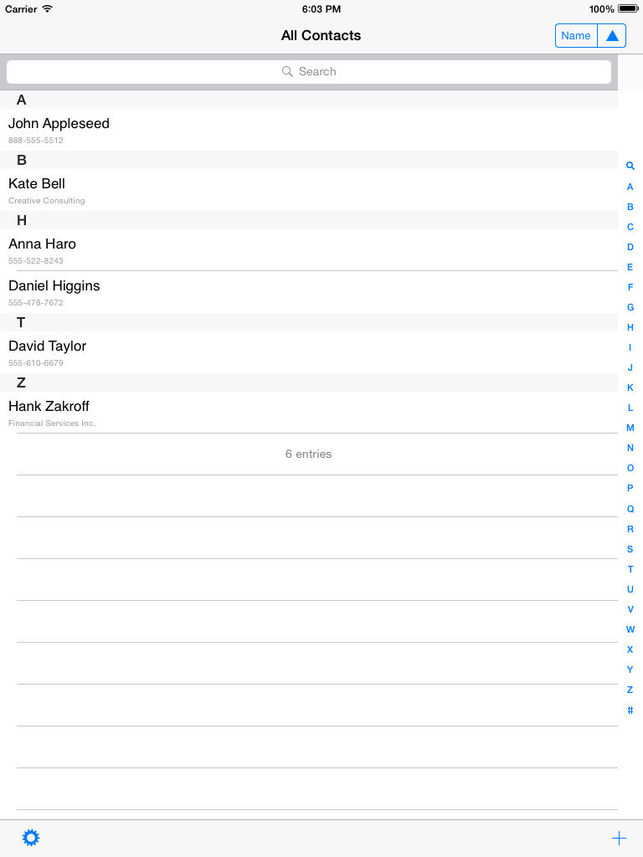 I get it, it’s quite a long name for an app doing so less. But believe it or not, as simple as it seems, it is not. Have you ever been in a situation where you save a contact and later forget the name you used to save the contact with? I bet you have.

This app lets you sort contacts based on the date of creation rather than arrange them in an alphabetical order. There’s nothing special that this app does, but you’ll know its true importance when you de facto fall into such situations by yourself. 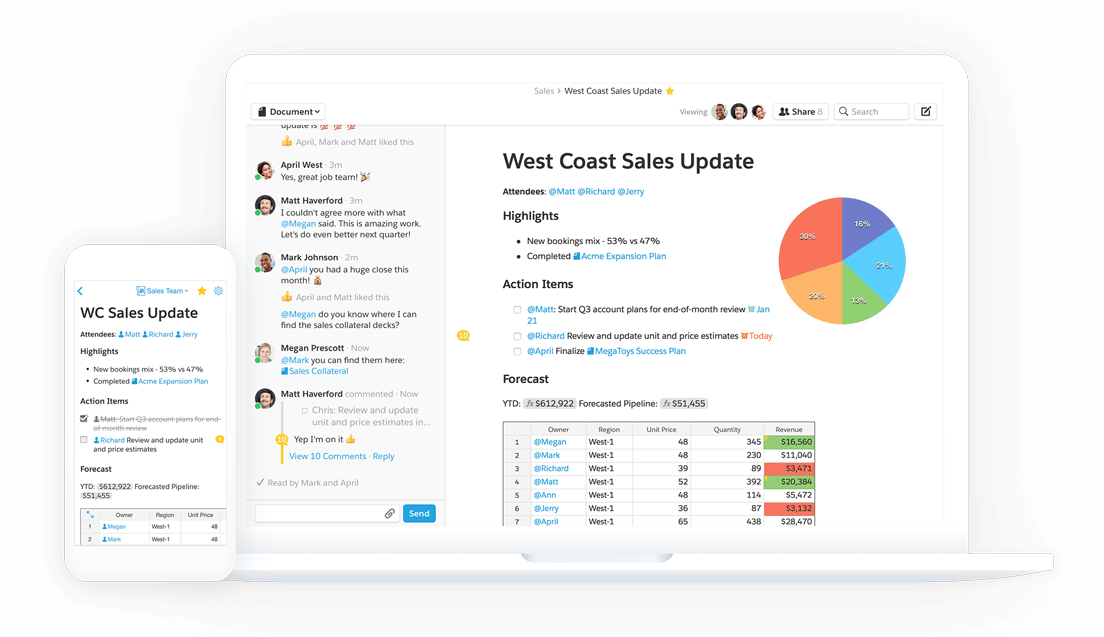 I’ve met with situations a few times where people close to me have expressed their remorse over their usage of Evernote. They say Evernote’s an app you’ll be able to use for some time and later get bored of it.

Personally, I don’t like using Evernote either. Not that it doesn’t work or has some major issues, but the stagnancy of the design and the overall commotion that it brings along with it sets me off. There’s one thing you must know about me; I am a huge sucker for user experience. If I find an app uninteresting in terms of its user experience, I’ll abandon it right away and look for an alternative. And that trend of mine exists heavily on note-taking apps.

Although, Quip is one app that has achieved my unwavering respect. It’s available on almost all major platforms and uses its own cloud service to sync notes everywhere. Although it isn’t syncing of notes that get my heart beating, it is the writing pane. It looks like you’re writing a blog post with all the headings and stuff.

You can also create sketches like every other note-taking app. Another region where Quip shines is collaboration. You can have seamless collaboration with friends and colleagues while working on projects. It’s like Slack on steroids.

We’ve covered note-taking. So why an extra app for the same purpose?

It depends on how you use the app. And it certainly isn’t fit for heavy note-taking. As for me, I use Google keep to keep track of my groceries and every other reminder I set. If I were to describe Google Keep, I would compare it to Tumblr. As Tumblr’s known as a microblogging app, Google Keep can be called as a micro-note taking app.

According to me, there are two types of notes you take in- one, which you take in a classroom or a business presentation; second, which you take while on the go. For example, I would use Google Keep if I had to note down a unique word from the dictionary. Did you guys know the full form of ‘ex’ is “Exempli Gratia?”

Well, as I mentioned at the beginning of this piece, being productive is difficult. It comes at a cost. But the question is, are you down to take an effort to change that, be the best? If you get stuck at any point, see if these apps are of any help…