The all new Google Pixelbook. All you need to know about..

Chromebooks mostly exist in two camps. The first is the education market, where an entire generation of students have been using cheap, low-end laptops to get their schoolwork done. The second camp is the direct-to-consumer market, where manufacturers like Samsung and Asus have been introducing higher-end models that creep up into the $500 range, but don’t have the power or flexibility of a proper Windows or Mac laptop.

Google has made a very nice, pretty expensive laptop

Google is bringing back the Chromebook Pixel, with a slightly different name. The new Google Pixelbook is a high-end Chromebook 2-in-1 that looks like a cross between a Lenovo Yoga laptop and Microsoft’s Surface Book. Just like the leaks we saw last month, Google’s Pixelbook has a blocky design with big keys, a wide trackpad, and a 12.3-inch display. It’s the new premium Chromebook that we haven’t seen for a couple of years now, and it’s priced starting at $999. 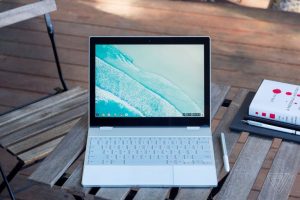 That’s a lot of money for a Chromebook, but Google think it’s worth it. Google’s Pixelbook flips around like a Lenovo Yoga PC to become a tablet, offering up different modes for tablet or laptop. While most PC manufacturers are moving to displays with thinner bezels, Google has opted for a tall 12.3-inch display with a 3:2 screen aspect ratio and rather large bezels. On the base model, priced at $999, there’s a 7th generation Intel Core i5 processor, 8GB of RAM, 128GB of storage. There are two USB-C ports for charging or accessories, and if you’re using a Pixel phone you can even set it to automatically tether data. 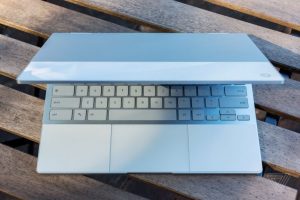 The 12.3-inch touchscreen display also supports a separate pen, priced at $99, that acts like a traditional Wacom stylus. The Pixelbook Pen includes support for both pressure or angle, and is powered by AAA batteries. The stylus has only 10ms of latency, and it will work with the Assistant for annotations. It’s not clear how many Android-powered apps will support the stylus, though. 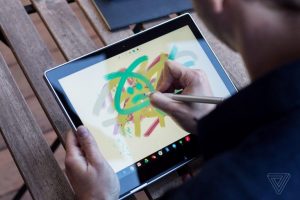 The display and design makes the Pixelbook look like a cross between a Lenovo Yoga laptop and Microsoft’s Surface Book, and it all looks very high-end. The stylus support is also designed to compliment the Pixelbook’s ability to run some Android apps. Google’s Android app support on Chromebooks hasn’t been that great so far, but there’s still hope that Chrome OS will improve this obvious drawback to better compete with macOS- or Windows-based laptops.

Google’s Pixelbook laptop starts at $999 and can be priced all the way up to $1,649. That places it against Apple’s range of MacBooks, Microsoft’s Surface Laptop, and a number of devices from PC makers. Three configurations will be available, and the Pixelbook Pen will be available separately for $99. Devices start shipping on October 31st in the US, UK, and Canada, and preorders have already started.