WhatsApp is a huge app which got acquired by Facebook two years ago. There are millions, maybe billions of WhatsApp users out in the world. Although, the Indian market for WhatsApp is fairly large as compared to any other country. Most of the stuff that happens in India, including business deals, shopping, trading etc involves the usage of WhatsApp. 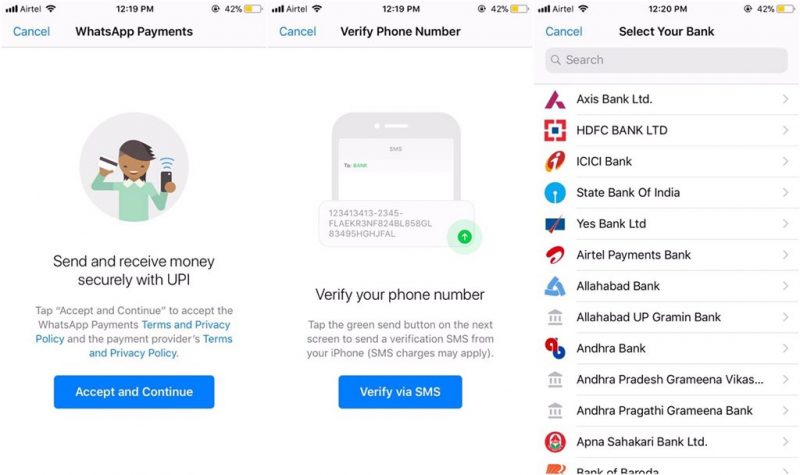 So adding to the flame, WhatsApp is planning to introduce ‘peer-to-peer’ payments in its app, kind of replicating iMessage’s Apple Cash feature. The fact that I’m stressing so much on India is because the feature is initially planned to roll only in India.

WhatsApp has partnered with several Indian banks to provide this service. It uses the already-existing Unified Payments Interface (UPI) which is an instant real-time payment system developed by National Payments Corporation of India. This interface is particularly aimed at processing transactions between the Indian banks itself.

UPI is not only going to be used in WhatsApp’s new feature but is already being used for various services in India including the Indian Railways. The facilitation is brought about by various apps such as PayTM, PhonePe etc.

The way that UPI works is that it instantly transfers money from one bank account to the other, while you would have to first transfer the money into the ‘peer-to-peer’ based payments app and then send the money if you were using a non-UPI enabled app. So it is mandatory for users to use UPI supported apps if they wanna facilitate direct money transfers from one bank account to the other. Additionally, it is also mandatory for your bank account to support UPI. Although, you can anytime go to your bank and enable it.

This is exactly what WhatsApp is trying to embed into its app. You will be able to directly send cash to your contacts from within chats. The setup process for the same is going to include limited steps asking for you to verify your phone number.

However, I can’t say how other apps with similar functionality will be affected considering the immense popularity of WhatsApp in the country. Additionally, this feature will be rolled on to Indian users in Q1 of 2018. Still, the estimated arrival time of WhatsApp’s ‘peer-to-peer’ payments system in other countries is unknown as for now.

However, I am always here to keep you updated on the latest news from all over the tech world.

Don’t forget to check these awesome posts if you wanna get educated on tech!