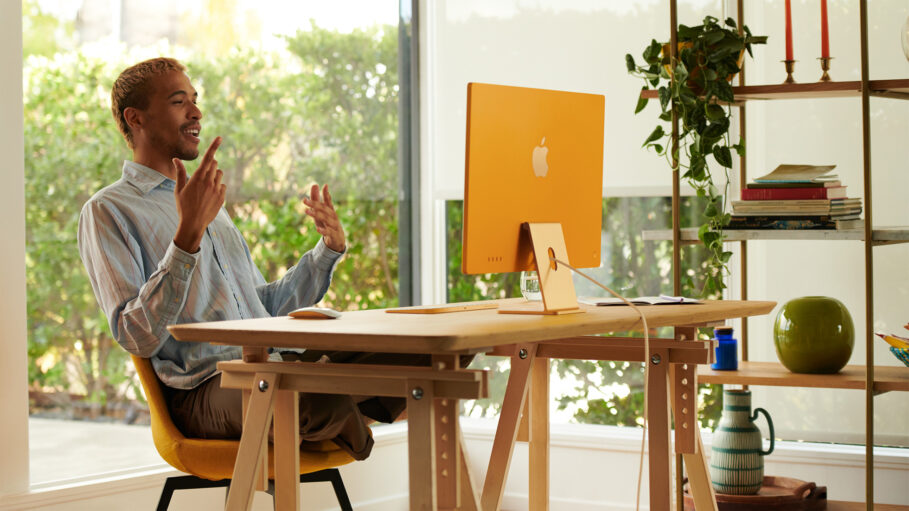 Apple today officially expanded its transition into Apple Silicon products by launching a new, redesigned iMac with an M1 chip at the “Spring Loaded” online event.

It will be available for pre-order starting April 30 and will begin shipping in the second-half of May.

The new iMac starts at $1299 and comes in seven new color options that better resonate with the spirit of Spring. Those include green, yellow, orange, pink, purple, blue, and silver. Moreover, the iMac has now adopted the flat-edged design of the iPad Pro and the Pro Display XDR resulting in a sleeker appearance than before.

The new iMac also includes a 1080p camera for better quality on video calls and includes the same image signal processor Apple shipped alongside its M1 MacBooks. Aside from that, the new iMac also has studio-quality mics and a six-speaker sound system.

The display is an improved “4.5K” Retina display; emphasis on the 4.5K.

Performance-wise, the new iMac is powered by the same M1 chip that’s included in the new MacBooks and Mac mini that Apple announced back in November last year. However, the iMac includes dual fans for cooling. You can read the new iMacs detailed performance metrics over at Apple’s Newsroom post.

As for connectivity, the iMac now has four USB-C ports, of which two support Thunderbolt 4. Users can connect an ethernet cord to the adapter itself which now houses its port instead of within the iMac’s housing.

Apple is also introducing new color-matched accessories for the iMac including different versions of the Magic Keyboard. One of those Magic Keyboards now features TouchID. Apple says that it has a secure system that interacts with the iMac’s Secure Enclave. Apart from that, the new iMac is also getting a new color-matched trackpad and Magic Mouse.