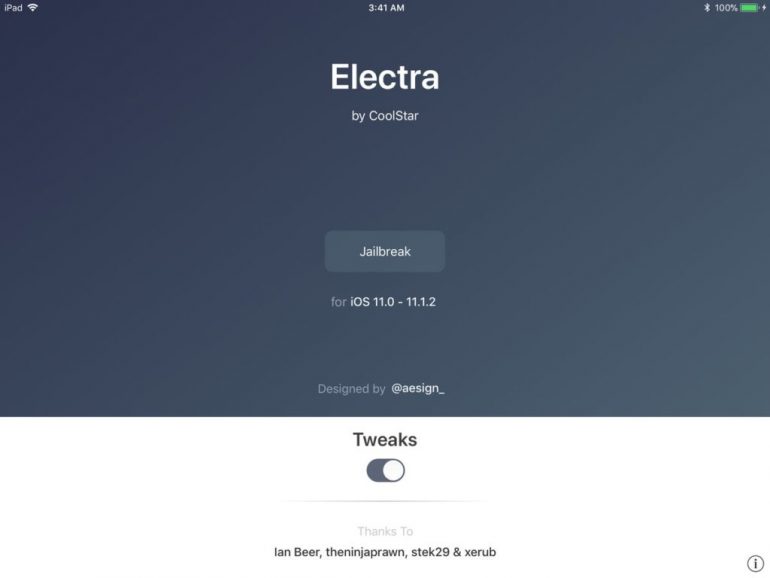 Like I’ve said before numerous times, Jailbreaking isn’t dead. In fact, it’s blooming at a level that we haven’t ever experienced. We now have an array of jailbreaks lined up. Also, it is surprising to know that people actually are confused regarding what jailbreak should they go for.

Also recently, the Installer5 team launched registrations for its upcoming beta. For those who don’t know what Installer5 is, bear with me. You may think of Installer5 as a Cydia alternative that even surprisingly works on its own substrate. Although, Saurik is also working on to improve and make Cydia available for iOS 11 jailbreaks. Though, if Installer5 succeeds in exciting people to use it, Cydia can see a probable downslide.

But, this could happen only if ever Installer5 could be at a better level than Cydia. It could also be a possibility that people may use Installer5 as well as Cydia.

Although, I seem to have proven my point at this stage. So let’s move on to the interesting part!

Electra jailbreak is a jailbreak released by Coolstar which functions on its own substrate alternative. But, there is a downside. Unlike Cydia supported jailbreaks, you have to manually install each and every tweak by yourself by copying and pasting the files from the extracted ‘.deb’ file into their respective directories either by using SSH or FilzaEscaped. It is a nightmare for jailbreakers who wanna be just fluid with their devices. Copying and pasting numerous files extracts the fun out of jailbreaking and makes it more or less like a difficult chore to perform.

Above all, if you ever fuck up your internal filesystem, you’ll have to face eternal circumstances by losing your jailbreak, as well as your data.

But, fret no more! I have used this tool named Electralyzed which automatically installs tweaks onto your iPhone. All you have to do is enter the IP address to which the iPhone is connected and enter the password. With that, you’ll be SSH’ed into the device. Now, provided that you have the ‘.deb’ file of the tweak beforehand, you can easily, just with the tap of a single button, install your desired tweak.

Well, finding tweaks that can be actually useful to you is quite difficult. There are colossal amounts of tweaks available out there that aim to change the overall look of your device. But there are very few that can amp-up the usability of your iPhone and make it easier for you.

The default camera app on the iPhone doesn’t seem to be doing much in terms of control and usability. Although, this tweak adds an extra feature that allows you to switch between the front and the back camera mode just by double-tapping on the screen in the default camera app.

There’s only one description for this tweak: Beast! Well, for those who don’t know, this tweak enables some of the iPhone X’s gesture-based features on lower models. For example, you can swipe from the bottom to stimulate the home button just like on the iPhone X. All other gestures including the multitasking app switcher gesture and the swipe left or right on the home screen gesture are packed into this tweak. Additionally, it also changes the position of the control center to the top right corner of the status bar- just like the iPhone X.

This tweak has been around for a while now. If you hold the shift key while erasing letters on a particular text, this tweak will erase complete words instead of single letters. As soon as you release the shift key, the keyboard will start erasing letters in a normal way. It is a fairly usable tweak that could boost your daily life usage speed.

PhotoSize is a simple and minimal tweak which could also go unnoticed after you’ve done installing it. What it does is, it shows the photo size as soon as you select a particular photo or video in the default photos app. It could be useful enough while sending large amounts of photos.

As its name suggests, this tweak is a simple one that makes the default, and irritating volume HUD appear in the status bar minimally. So no more disturbance while watching that beautiful scene from Game Of Thrones!

This is a smart one. As soon as you dismiss a notification from the notification center, this tweak fires up and eradicates the annoying badge icon corresponding to that notification. This makes it much easier to know what notifications you’ve already seen and don’t need to waste your time seeing them once again.

The legacy is back. The “++” apps have finally been upgraded by the UnlimApps team. This means that they now function on iOS 11. Although, you will need to have uasharedtools to be installed first for these apps to take action. Well, they also don’t have the regular installation process. You will have to use an SSH client on your desktop or rather on your iPhone/ iPad itself to get these apps installed. Just click on the link to a Reddit post down below which explains how to install these apps along with uasharedtools. Although, I recommend you to read the instructions carefully before you carry on with further steps.

For those who don’t know what the “++” package of apps is, it is a tweaked version of them which adds an array of useful new features such as downloading photos and videos on Instagram, customizing the regular Twitter app and power charging it with features, adding customizability options on WhatsApp and similar functionality on Facebook.

Ever wanted to record a call? Though, you should know that recording calls without the other person’s consent could be illegal. But, there are some times when you are speaking with a client and with both of the side’s permission, you have to record the call for quality purposes. Normally, stock iOS doesn’t allow users to record calls even after intslling apps to record calls from the App Store. It turns out that most of the call recording apps from the App Store are either bogus, or get removed from Apple.

Although, with having the liberty of a Jailbreak, we have a solution. Limneos, the developer behind MobileMiner has developed a call recorder and smartly named it as AudioRecorder. And of course, it records calls.

This tweak is the most relevant to iOS user’s conditions. With this one, you can get the advantage of having an extra row of keys above the usual keyboard. Although, this tweak did not work well on my device, as all the other keys were disrupted by that extra row. But, it’ll be cool to hear from someone on whose device this tweak works properly. Once it works flawlessly, it could be a game-changer.

Similar to the infamous TinyBar tweak available for previous jailbreaks, this tweak also displays incoming notification banners in a more minimalistic way. Look at the image below to understand what it really looks like. It makes life so distraction free and easier than ever.

This was our list for today. Although, I would appreciate some suggestions. Fire up in the comments below if you have some issues or if something ever gets haywired! I will try to help you at maximum potential.

Have a nice jailbreakable day!