Making your iDevice free of all the restrictions imposed on it by Apple is a holy task. Everyone has the right and wants to have a device on which they can go off limits without switching to a rival platform. Jailbreaking is such a deed where you can make your device free.

Suppressions such as not being able to control your WiFi settings through the Control center and not being able to remove the ugly colossal volume HUD are awful. Well, that is what’s jailbreaking for! You can do almost anything with a jailbreak. You can have your wallpapers changed automatically by itself every single day or you could just set a GIF as a lock screen wallpaper.

But, all that is only possible on iOS 11 if you have the Electra jailbreak. For those who don’t know what that is, bear with me.

Electra jailbreak is a jailbreak released by Coolstar which functions on its own substrate alternative. But, there is a downside. Unlike Cydia supported jailbreaks, you have to manually install each and every tweak by yourself by copying and pasting the files from the extracted ‘.deb’ file into their respective directories either by using SSH or FilzaEscaped. It is a nightmare for jailbreakers who wanna be just fluid with their devices. Copying and pasting numerous files extracts the fun out of jailbreaking and makes it more or less like a difficult chore to perform.

Above all, if you ever fuck up your internal filesystem, you’ll have to face eternal circumstances by losing your jailbreak, as well as your data.

But, fret no more! I have used this tool named Electralyzed which automatically installs tweaks onto your iPhone. All you have to do is enter the IP address to which the iPhone is connected and enter the password. With that, you’ll be SSH’ed into the device. Now, provided that you have the ‘.deb’ file of the tweak beforehand, you can easily, just with the tap of a single button, install your desired tweak.

Also, as I’ve mentioned in first part of this post, it is quite difficult to find some interesting tweaks. There is a huge array of tweaks out there that’ll help you change the physical appearance of your device’s software. But there are very few that can amp-up the usability of your iPhone and make it easier for you.

This could be considered as an all-in-one package. Circuit Breaker contains a ‘.deb’ package installer, and an overall Electra jailbreak management utility tool. You can do all of this stuff using this tool:

From the Reddit announcement of its developer- You can

CircuitBreaker can also be considered as an alternative to iCleaner as it provides an option to rebuild the uicache, which is what iCleaner does to clean up the filesystem. Uicache flushes all the cached files into the dump. This empties some space into the device as well as helps to remove harmful cache files. 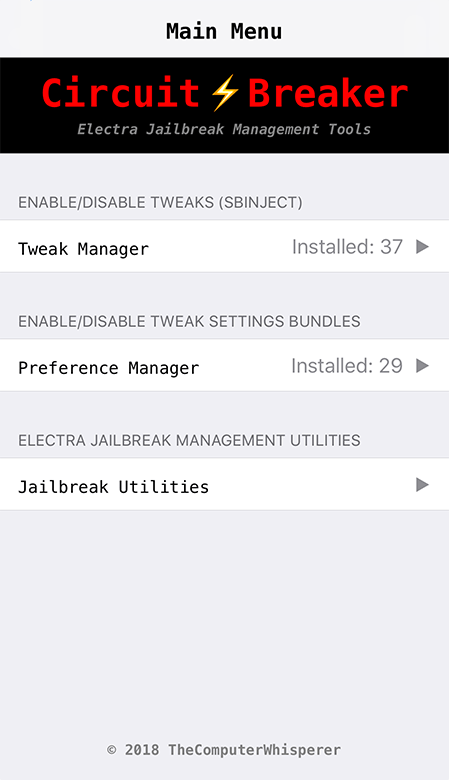 This tweak is extremely useful as you can enable and disable tweaks along with enabling and disabling their settings. I don’t think there is any tweak out there more useful than this one. So, it tops the list!

Have you ever had an awkward situation where you dialed a number and waited for it to connect only to know that it had been connected a while ago and you weren’t aware of it? Well, I’ve been in many. But no more. Cause this tweak sends a vibration through the phone to make the user aware that the call has been connected/disconnected. Isn’t it extremely useful?

It is super annoying when the screen doesn’t rotate while watching a video. So, you have to toggle the rotation lock on. But after you’ve done watching the video, the screen rotation still bugs you as you forget that you turned it on. There’s a solution to this. Install ‘LetVideosRotate’ and you will be carefree. This tweak enables rotation only when watching a video and turns it off automatically as soon as the video gets over.

This tweak notifies you the progress of your ongoing app download replicating Android’s similar feature. It sends you a notification if an app starts/finishes downloading. It also shows the percentage of the app download in the app drawer. This makes downloading apps from the App Store a lot more convenient.

This tweak, having a pretty long name is indeed very useful. It removes the passcode validation screen after you respring your device. As for jailbreakers, respringing is a task that has to be performed most often. Although, having to enter your pin each time you respring is kind of annoying. Use this tweak to remove that validation and respring without annoyance.

As clear as its name suggests, this tweak shows more data in the cellular usage page in settings. For example, you can tap on to system services to see exactly which services are eating up your data, with added data of hidden services. You can also tap on the uninstalled apps tab which is usually untappable. But this tweak shows extra info on that as well.

This tweak lets you just tap (not press) the TouchID sensor to perform regular actions such as going to the home screen, opening the multitasking panel etc. Although, it is sad that iPhone X users don’t have it. Well, it’s certain. So dumb of me!

So, Keyboard Accio lets you predefine any two keyboards and by tapping the globe key, you’ll be able to only switch between those two keyboards rather than going through all the keyboards in the list.

Apple introduced a feature for its new iPhones launched last September called as portrait lighting. It allows you to simulate studio lighting using the advance front and back cameras on the iPhone 8 Plus, and the iPhone X.

Although, this tweak allows portrait lighting to be enabled on the iPhone 7 Plus which also sports a dual camera. No one had ever thought that a tweak like this could ever be made.

This was our list for today. Although, I would appreciate some suggestions. Fire up in the comments below if you have some issues or if something ever gets haywire! I will try to help you at maximum potential.

Have a nice jailbreakable day!