These are the best themes you can install on the Electra jailbreak. 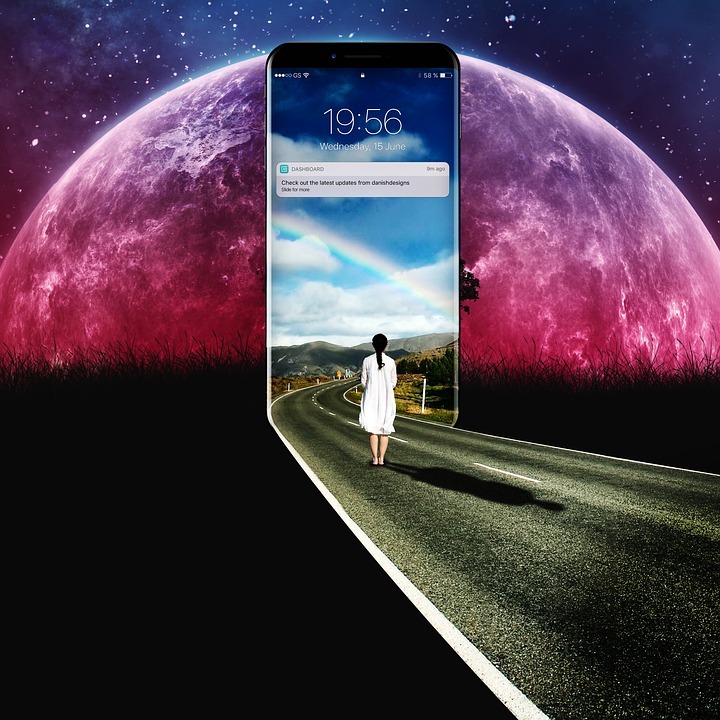 Like I have said before in my posts numerous times that jailbreaking is the process of unleashing the beast from your iPhone, iPad, or the iPod. Although, after a rough last year, jailbreaking is once again into the scene and now we have abundant jailbreaks for iOS 11 than ever before in the history of jailbreaking. Jailbreaking usually requires a backdoor into the iOS device by any method. If there’s a major bug in the Bluetooth section on your iPhone, an exploit can be created on that, which further can be developed into a jailbreak. As a different example, if there is a major bug in the camera of your iPhone, an exploit can be created to create a backdoor into the root of the file-system, which further can be developed into a jailbreak. However, all the iOS 11 jailbreaks have been made possible using an exploit which was provided by Google’s Ian Beer.His contribution to the jailbreaking is scene is quite significant and without him, none of these jailbreaks would have been possible. Based upon that, various developers have launched several tools which actually help your device to escape the jailed state and enter a free, ‘jailbroken’ state. By the way, the tools released so far include: But, out of these three working jailbreak tools, the only tool effective is the Electra jailbreak tool by Coolstar as you can actually install working tweaks on it despite the lack of Cydia. You can use Electralyzed- a simple Electra tweak installer which automatically extracts all the files from the ‘.deb’ format to their respective directories. You won’t have to worry about fucking up your device at all if you intend to use this tool. Just for your information, I am not affiliated with the Electralyzed tool. It’s just that I feel it’s the most versatile and light-weight Electra tweak installer out there. Additionally, Coolstar is supposedly working on adding partial Cydia support to Electra. After he does the deed, we won’t have anything to worry about, except for our first world problems. LOL Well, I feel like it’s time to address the elephant in the room. Tweaks and Themes! For those who don’t know or are new to jailbreaking, keep in mind that tweaks and themes are the reason that you decide to jailbreak your iDevice in the first place. Tweaks are little enhancements or customizations that you can install on your iPhone provided you have jailbroken it. There are various tweaks that either help to increase your productivity by making stuff easier to perform on your iPhone or just make your iPhone look aesthetically better. We also have tweaks that are purely made with the intention to bring a smile on the user’s face. Enter themes, which are more on the side of aesthetic beauty but are totally worth installing. Despite tweaks, that are kind of functional, themes are focused to improve the way various aspects on your iPhone look. You can theme the icons on the springboard to make the springboard look much more than regular. You can change the dock’s shape, size and the overall look of it. Themes are for users who want their phones to look dank, not just function in that manner. So, I searched, skimmed, read, screeched and did what not to find these themes for you. Just kidding! Found it all from a simple Google search. Take a look. 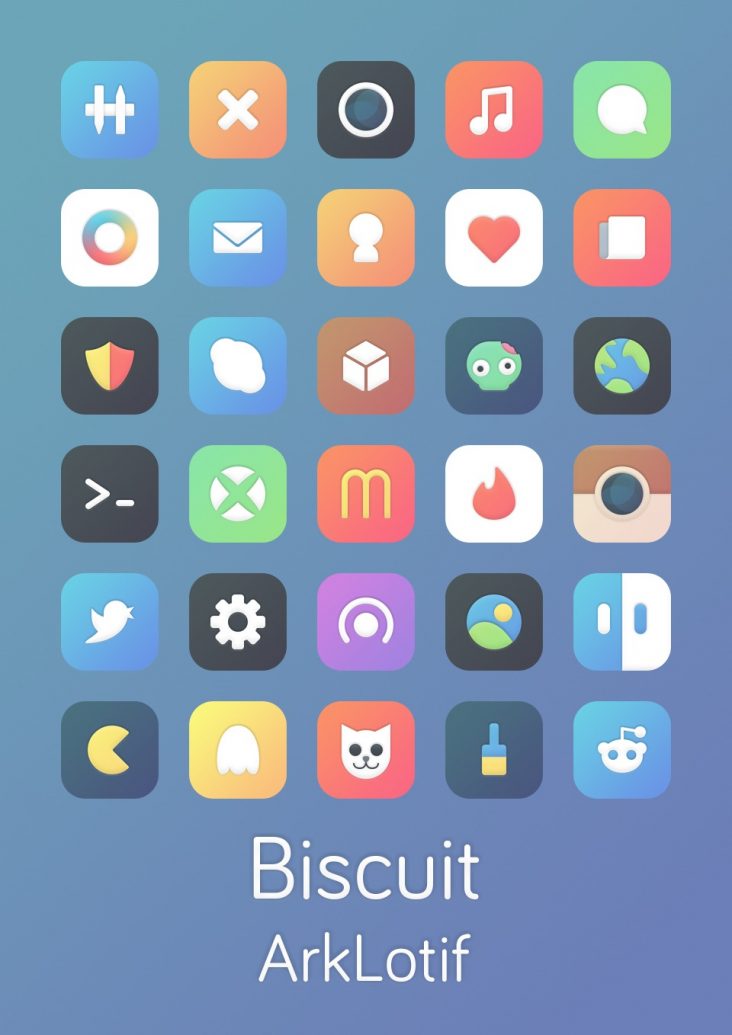 Biscuit is a cool theme by ArkLotif which enables has gradient-based app icons. The icons are designed in such a way that it feels as if it were a mental therapy to calm down your mind. Apart from that, the icons have a slight depth in the background. This is my personal recommendation for you. I know that this will sound cheesy but my favorite icon is the Twitter app. Download: Biscuit 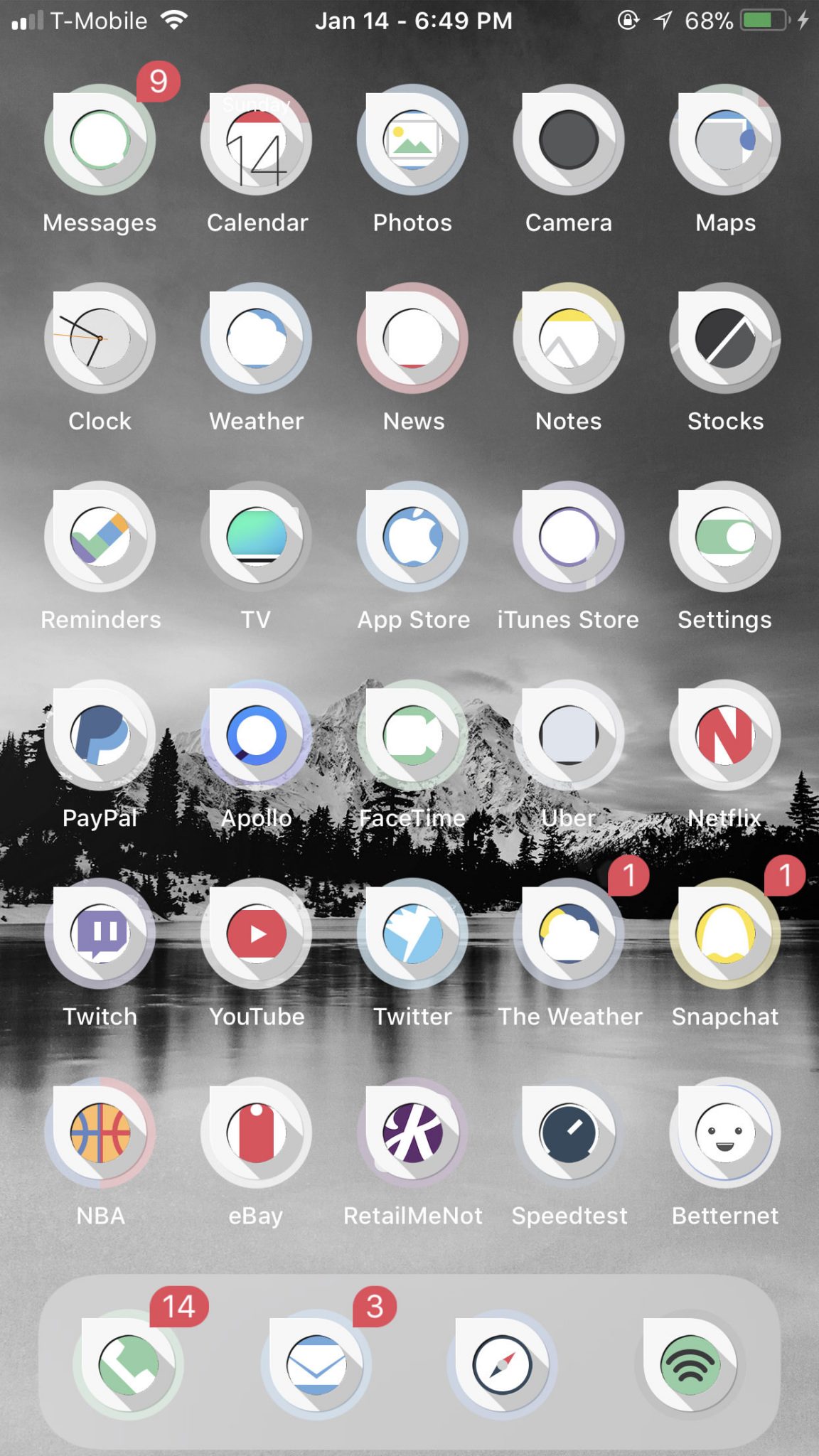 For all the fans of white color out there, this is the best theme you can get. Whiterd adds a white theme to your icons, yet leaving them colorful. It looks like the location tag is stuck onto circle icons. Although, app badges stand out on this theme making a good contrasting overall image of your springboard. Download: Whiterd 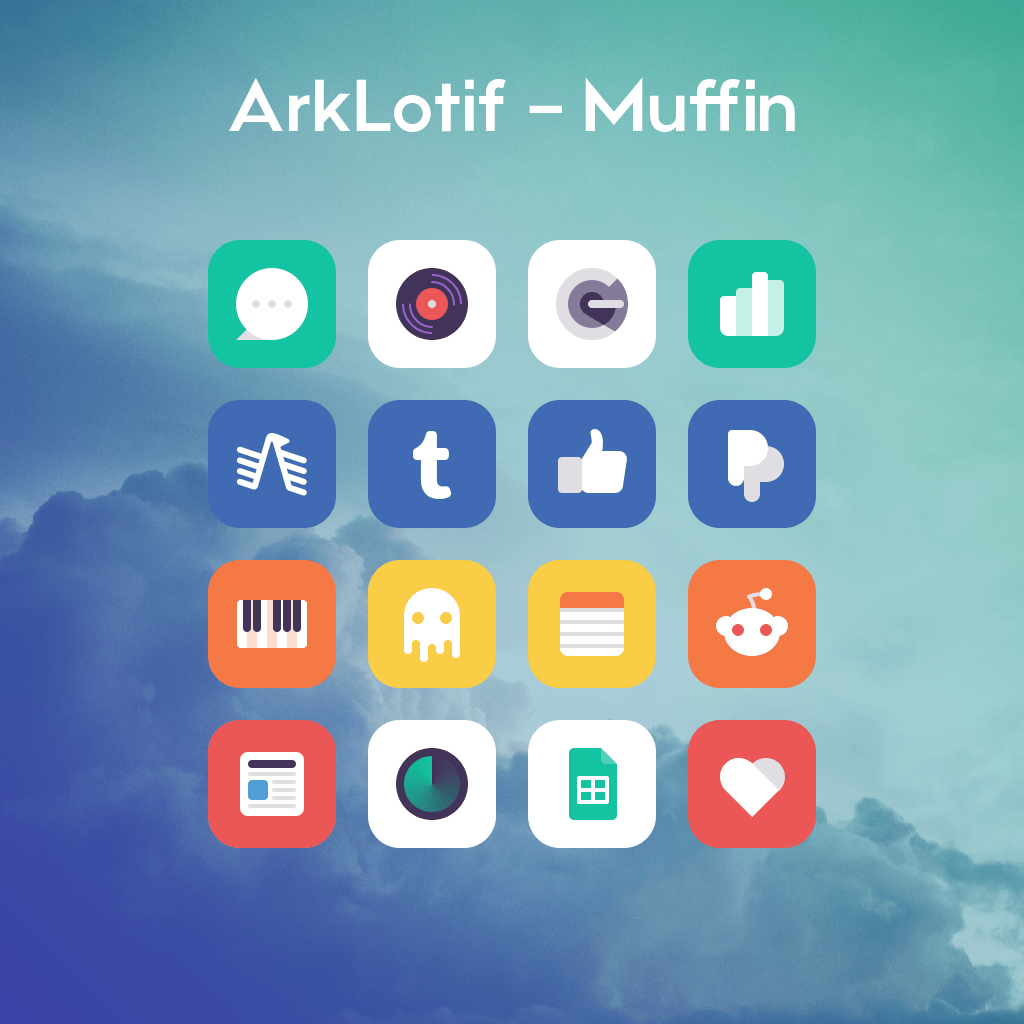 Another similar theme from ArkLotif who decides to name his themes on food. Muffin is a fairly simple theme, yet functional. It lets you theme the settings, the sounds, the respring logo as well as the status bar. The icons look bright and vibrant. But the most interesting part is that this theme supports more than 350+ icons. Download: Muffin 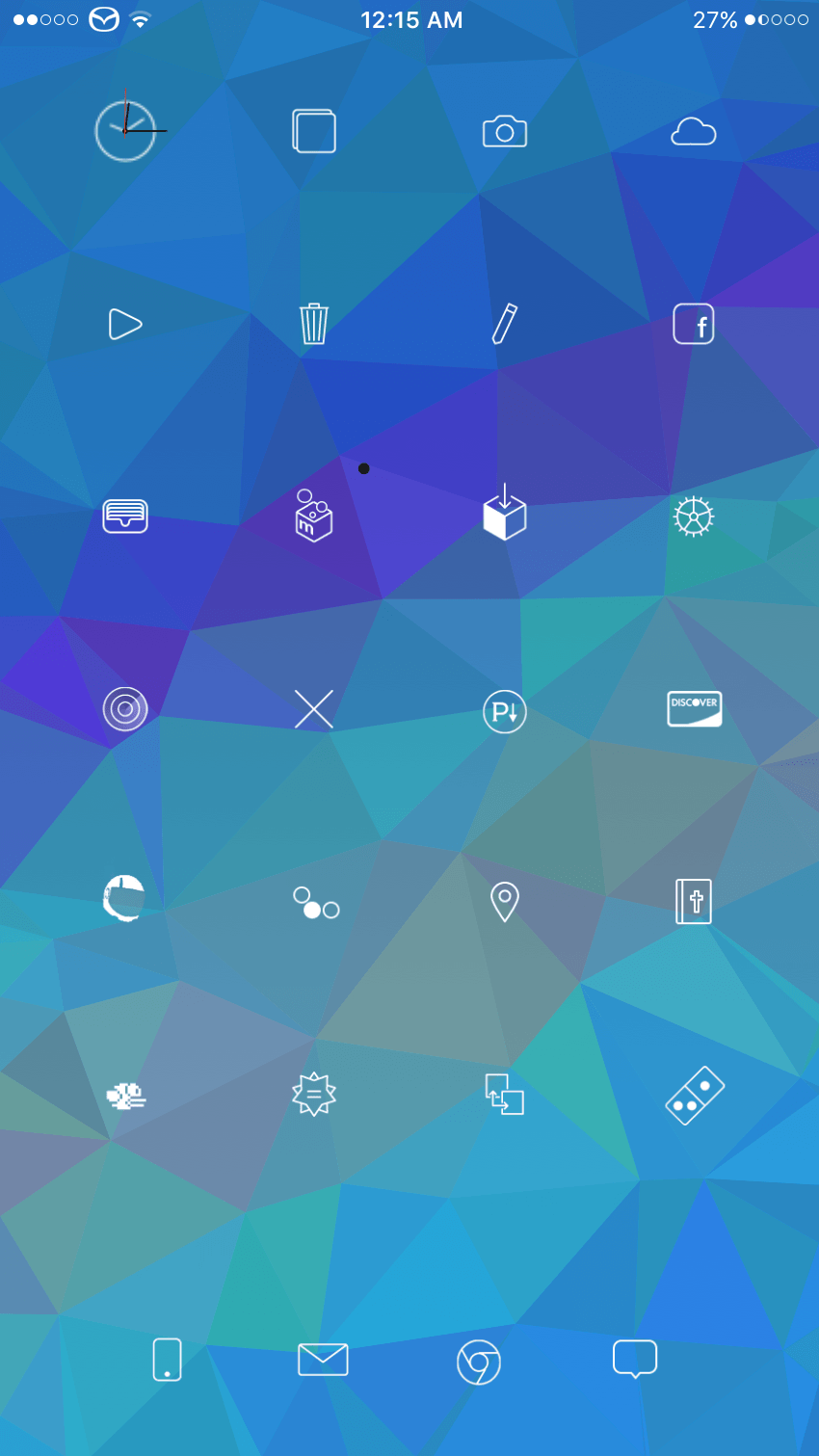 Gotham is an ultra-minimalistic theme that completely re-works the way your icons look. As you can observe from the image above that icons are way smaller and look utterly simple. As for me, I’m not a big fan of this theme just because this simple look becomes very stale to the eyes after some time. However, for those who like extreme minimalism, check this out! Download: Gotham 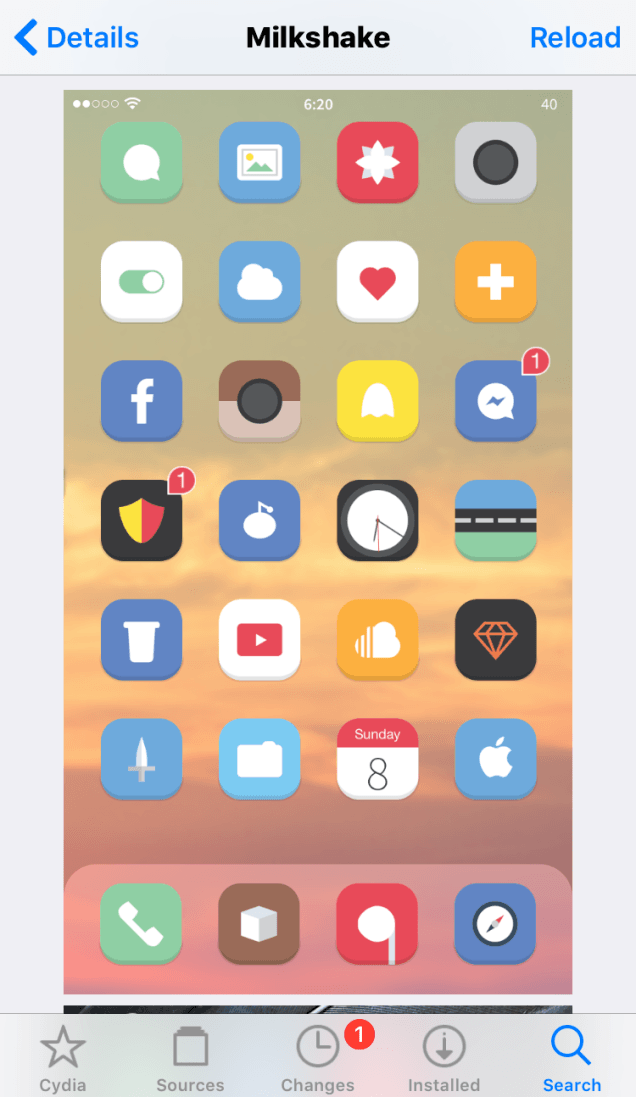 Yet another theme from ArkLotif named after a food, except this theme rose to immense fame. It is the best theme out there. It has icons that you’ll like to press. Because they look so good. Additionally, the theme also supports tweaking the dock, respring logo, status bar etc. However, you should note that the respring logo and status bar options don’t work on iOS 11. It caused my device to boot into safe mode and won’t boot into the jailbroken state even after disabling that. So, I ended up deleting them. Download: Milkshake

A rustic looking theme hosted on the ModMyi repo. Gentleman is sure to impress you as well as everyone around you with its extremely contrasting icons. I bet these would work even better on iPhones starting from the iPhone 7 and up, as those phones have a wide color gamut. This theme contains 20 docks, 12 badges, several folder styles and even more anemone effects. I would totally recommend this theme to anyone who likes their iPhone being rusty. I mean, not literally. What? No? I hope you did not take that literally! Download: Gentleman

Disclaimer: Only for iPhone 7 Better iPhone X Dock brings the iPhone X style dock theme to older iPhones. For those who don’t know, as iPhone X does not have a home button, the dock has been redesigned to better match the hardware design of the phone. So Apple decided to round the corners of the dock on the iPhone X. Although, with the help of this theme, it is possible to get a rounded dock similar (not exactly) like an iPhone X on older devices. But for some reason, it only works on the iPhone 7 as of now. Download: Better iPhone X Dock 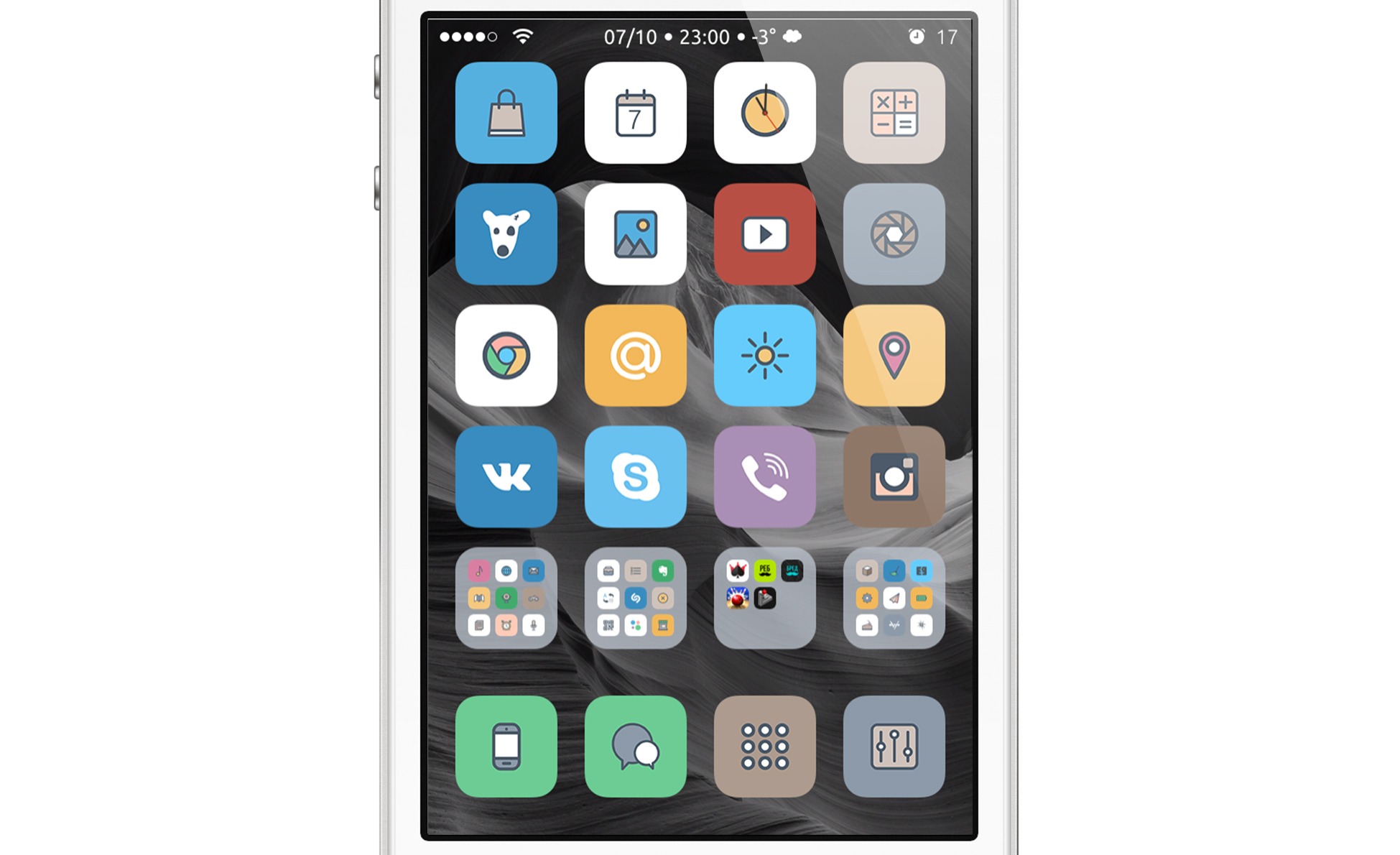 When I was on a lookout for insights into some themes, I found this them named Insight. No, that’s not what really happened. Don’t mind me. I’m just a non-humorous guy giving my try at humor. Gosh! I should be stoned at this point. Insight has cute looking icons along with slight tweaks to the folders as well. The cream-colored icons are a delight to the sight. Throw a dark looking wallpaper and your device will be ready to rumba! Download: Insight This was all for today but leave some comments down below if you have a doubt of any sort. Also, if you’re hoping for a part 2, fuck yourself! I’m joking. Just leave that in the comments as well. Have a nice day!