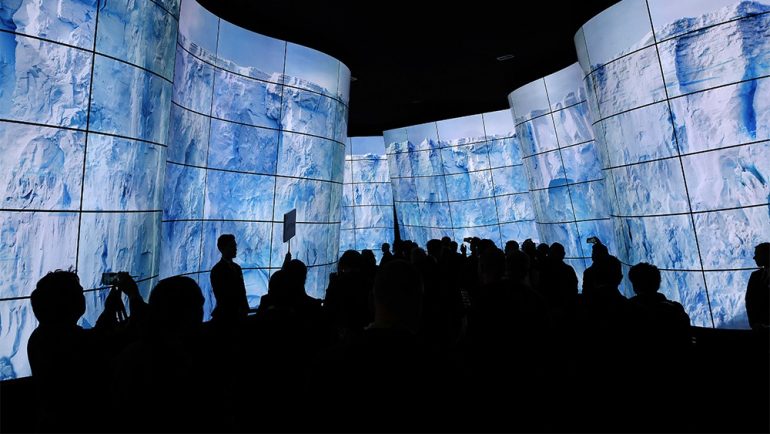 CES this year started off with a blast. Well, I wasn’t the one that got to attend it, but there are many other blogs who got the chance to. Well, many of them have stated for this event to have improper planning and management. That is because of a power outage that lasted for complete ‘2 hours’. Although, it is not a big deal for power cuts to happen. But when you’re at an electronics convention center and lots of devices depend on power, fingers can be raised. That did not end there, as Samsung took almost over an hour to boot all the devices kept on the display, according to The Verge.

Apart from that, if we focus on all the positive aspects, the technology featured this year was amazing. From, mini-robots that can do numerous things, to self-driving cabs. Well, here we have the five best things on display at CES this year.

Autonomous driving has come a long way with Tesla being the first completely autonomous car company. Well, Byton here has something better to offer. For those who don’t know, Byton is a new Chinese company aimed at producing autonomous modes of transport. The Byton Concept EV is a new car from Byton, that oozes technology. For starters, it has cameras everywhere. Cameras are present in place of rear-view mirrors, in the front, and at the back. This car would totally make you forget what mirrors are. As far as the dimensions are in concept, this car has a length of 4.85 meters and a breadth of 1.94 meters. Its height is 1.65 meters. 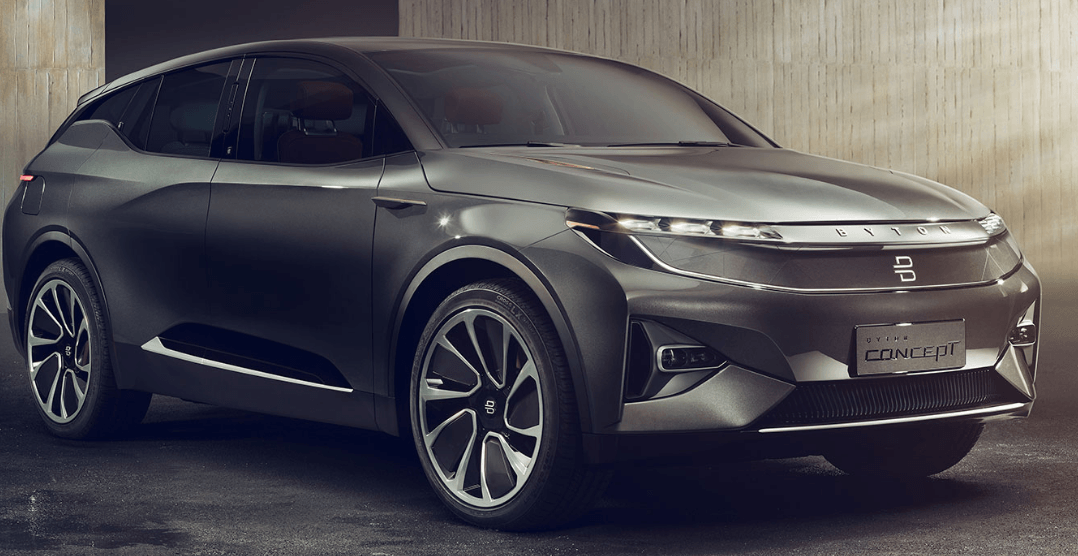 This is a pretty sleek car with beautiful cuts and curves, just the ones that you would like to see in a girl. But, the most important part of this car is its interior. It has individually adjustable front and back seats. The armrest for the front seats provides room for storing tablets and e-readers. The front seats itself are inward-rotating, so you can enjoy your time with your friends in the car. But probably, keep your eyes on the road as well.

When we were smaller, we used to fantasize about huge control displays in cars. Well, here you have it! The Byton Concept EV has a “coast-to-coast” shared display at its dashboard. Though, it feels as if the whole dashboard is a screen. Don’t worry, this car’s safety features will ensure you don’t get distracted by the beautiful display. The car has immersive head and tail lights which truly makes it look like a car from the future.

Speaking of the inclusion of artificial intelligence in the equation, the Byton Concept EV is supposed to greet you as soon as you come near it. It will get used to your needs over time, and learn from your driving. For security, the car has facial recognition built in, so you can also make user profiles and change the skillset based on the person driving. It also has a tablet attached to the steering wheel so the driver can have ultimate control. And speaking of control, Alexa is built in for voice recognition and works as a complete assistant in your car.

But Alexa and most other services require some connectivity. And that connectivity usually comes from the shark-fin antennas fitted on the top. But, Byton ditches that idea and instead opts for a completely hidden array of flat antennas integrated into the roof line. Moreover, it supports completely autonomous driving, just like most other cars nowadays. But the company has promised to provide updates regularly to improve the overall software in the car, time to time.

As this is an electric car, it needs its battery to fill up. But, there’s a twist. The Byton Concept EV can get you to 150 miles in just 20 minutes of charging. In 30 minutes, you can expect your car to be charged up to 80%. I wish we could have the same advantages for smartphones. The Byton Concept EV will be available to buy in the US late 2019 and will be priced at $45,000. 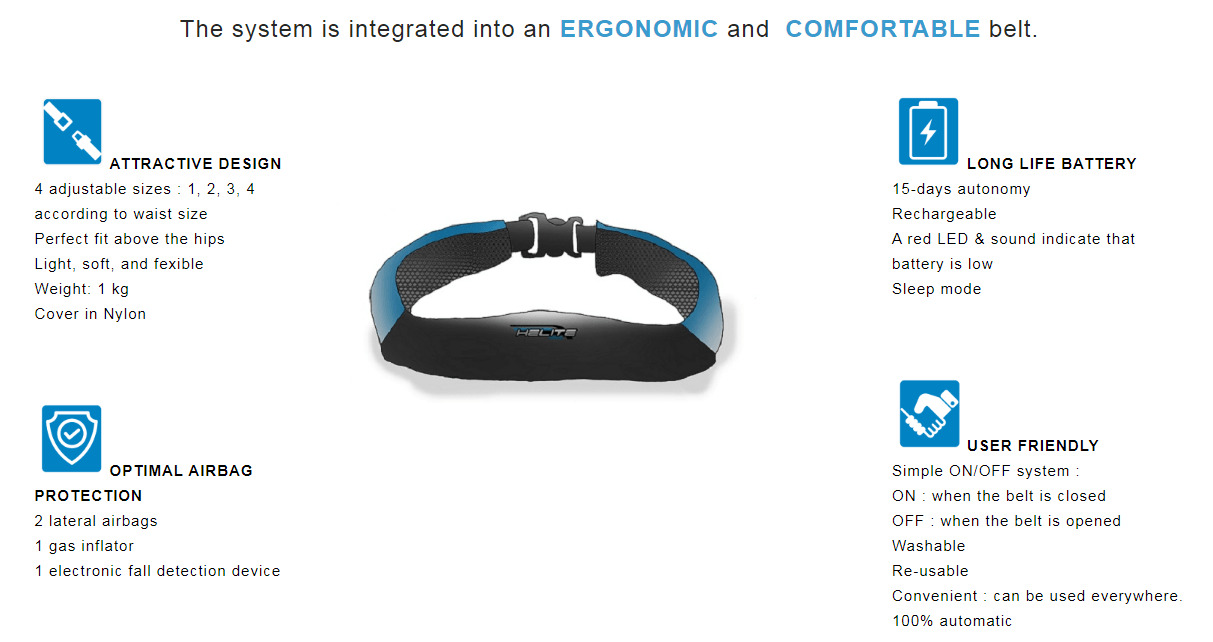 It is basically a belt meant for aged people whose bones aren’t as strong as they used to be when they were young. The ability of the body to extract calcium (it is what bones are made up of) and transfer it to the bones decreases over time. So, even the smallest injury to the bone could result in permanent damage. Also, the pelvic girdle is a very important bone which can cause death if injured. So this belt is made for the ultimate protection of your pelvic girdle.

Its way of functioning is also unique in itself. There are motion sensors embedded in the belt. So, as soon as someone falls by their side, the airbags on the side inflate and save the pelvic girdle from injury. This is the same principle that is applied in airbags present in cars.

But there is one downside to this belt. And that is, no one would ever want to wear this belt outside. One of the main reasons could be the added weight doubled by the structural ugliness of the belt. Anyone walking around could notice the belt around your waist. It bulges outwards. And that could make you look obtrusively fat.

Although, life is more important than looking good. So, I do recommend this belt at least for old folks. This belt is gonna be available for pre-order in France in 3 months and is priced at $800. Have good time folks. Stay safe!

The world of technology is utterly surprising sometimes. With the rolling of completely autonomous vehicles on the road, safety remains a huge aspect. In 2015, 10,265 people had to lose their lives in alcohol-impaired driving crashes. But then what do you do if you are drunk and you gotta reach home?

You get a cab. Obviously! But, what if we turn the game up a notch? What if I told you that there is a cab service aiming at autonomous cabs? Yes, it’s possible. In fact, Lyft- a popular cab service in the US is implementing driverless cabs in its system. Lyft collaborated with a company named Aptiv which is aimed at semi-autonomous cars.

At the CES convention center, all those who’d attended the show could hail a Lyft self-driving cab to go to whatever destination they wanna go.  As soon as you enter the cab, you would notice a tablet-sized display in between the two front seats. So the one seated at the back has to tap ‘confirm’ to initiate the ride. Then the display shows the route you’re gonna travel on. As soon as you hit the road, a female voice informs you that the trip has begun. Now, all you’ve gotta do is relax. While on the trip, the display will show you all the information that you need to know about the trip, like the surroundings and traffic conditions etc.

However, this is just a concept and Lyft is testing this project as of now. We’ll be able to see this plan go into action in late 2019, I think!

Imagine having a phone which you can dock anywhere to do all the laptop related work? Razer’s Project Linda is kind of just aimed at that. Basically, you have a complete laptop with a screen, a keyboard; but no internals. Also, it lacks a touchpad. But, a Razer phone can substitute for the trackpad, the speakers, as well as the processor.

All you have to do is to just dock your Razer phone into the docking space provided in the conceptual laptop and press the docking button which is on the upper right-hand side corner of the keyboard. As soon as you dock the phone, you’ll experience a slightly modified Android interface for the laptop, more like a Chromebook. You have different options on the keyboard as well using which you can invoke certain options like activating google assistant, enabling the app switcher etc.

The Linda Project Concept also charges the docked Razer phone. It has a camera and a microphone of its own. And like most standard laptops, it does have a headphone jack and a USB C port on one side and a USB A type port on the other side. With this, you can connect basically any peripheral you like as far as it’s supported by an Android phone. Well, the core operating system is from an Android device, so the framework is sure to be Android as well.

I seriously hope for this project to be a reality. Imagine having these laptops already kept at Starbucks. So, whenever you go to get a beverage and you have some work at the same time, you can just dock your phone and get to work.

Remember this technology that was initially in a lot of hype as it was thought as if it was going to be implemented in the iPhone X. But, later we ended up with a better technology called FaceID. I’m glad Apple did that. Although, Vivo- a smartphone manufacturer has been successful in implementing this technology into its device. Also, Vivo hasn’t disclosed which model of its upcoming smartphones will have this technology.

Basically, it is an on-screen fingerprint sensor that, as its name suggests, can scan your fingerprints from beneath the screen. So, it doesn’t have a dedicated sensor space on the hardware which is prominently visible by its existence. Instead, the phone will provide you with a software glyph on the screen while unlocking, which will ultimately be the place that will authenticate your fingerprints.

Now, you couldn’t say that Vivo is going to experience a spike in their sales regarding this phone. That is because people won’t be buying phones just for the cause of having an embedded fingerprint sensor. I mean people are way over fingerprint sensors after the launch of the iPhone X.

Well, that’s it for this CES guys. These were the best things present at CES that have the ability to define the future of technology.

Also, feel free to check out some jailbreak related stuff that might help you.