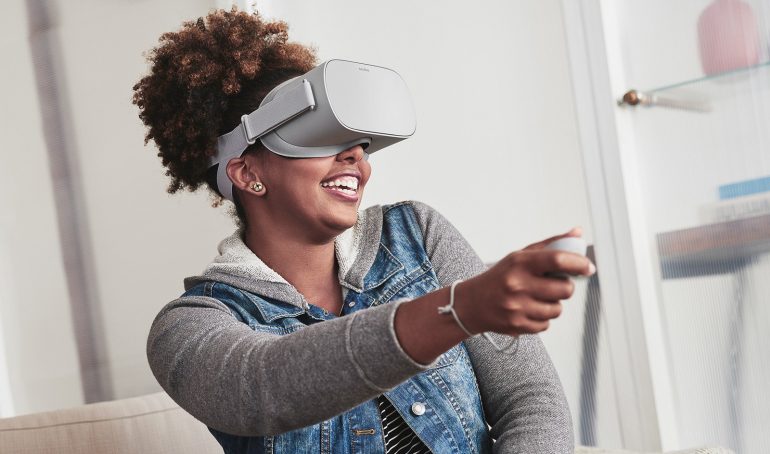 For many people, the barrier to entry to get into VR can be quite high. PlayStation VR has been on the lower end at $299 for the headset and $299 for the PlayStation itself. You could also see yourself paying upwards of $400 for an Oculus Rift and at least $800 for a powerful enough PC. Even with these setups, you’re tethered to your console or PC via a cord connected to the headset.

Want to watch a movie in VR? Better do it by your computer.

Want to have a tour guide show you around Venice? You’ll have to be by your computer for that too.

There’s always the option of connecting your phone to a mobile headset, but then you’re draining your phone’s battery rather quickly and nothing breaks the immersion more than a phone call.

This is all about to change with Facebook’s newest entry-level Virtual Reality headset, Oculus Go.

Oculus Go offers many benefits by being a standalone headset without the need for a PC or smartphone. And it starts at $199. 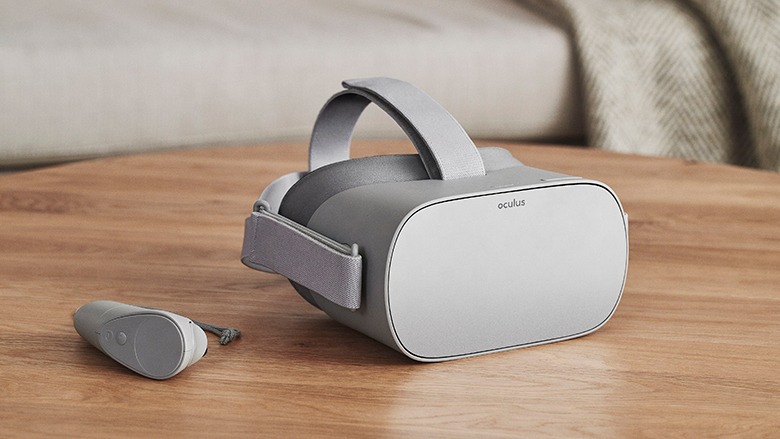 After putting one on I found the build quality and comfort to be on a premium level, especially at that price point. The straps are soft and flexible, the included Glasses Spacer adds room for your frames (nice touch), and the face mask sits comfortably in place with little fuss. I had an easier time adjusting the headset to a viewable angle than with other products. Other people have told me the same. However, the ability to adjust the distance between the lenses so they line up with your eyes is missing here, but that never really got in the way for me. Maybe for some, it will.

The face mask sits comfortably in place with little fuss.

Once the headset is on you’d be pretty hard pressed to not notice how good the display looks. It’s pretty remarkable. In fact, it’s even higher resolution than the Oculus Rift and HTC Vive. Despite still having the infamous “screen door” effect, it’s barely noticeable unless you’re looking at a text. Watching movies on Netflix for the first time in VR felt like an experience I’d actually want to do. And I did! I watched all of Arrested Development’s remixed fourth season on Oculus Go and enjoyed the experience immensely.

Any VR video content I watched left much to be desired to no fault of Oculus Go. VR cameras still have a long way to go before they produce content at a reasonable quality. Until then it’s passable and we’ll just have to wait. Luckily Oculus Go will be capable of viewing VR video at a higher quality once technology catches up. 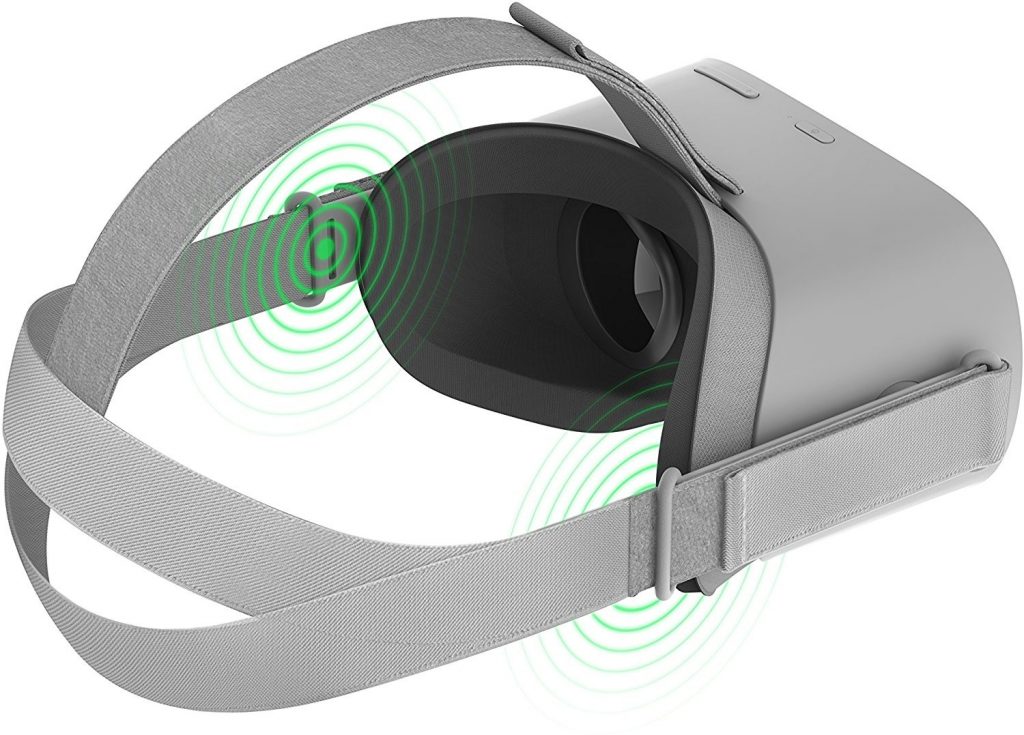 The audio for Oculus Go cleverly comes from hidden slits built into the straps unbeknown to most on a quick glance. They produce spatial audio while allowing you to hear what’s actually around you in real reality. If you prefer using your own headphones, there’s also a headphone jack.

Not everything about Oculus Go quite reaches these high points, but none of the downsides interfere with the experience too much.

For starters, I had some mild issues with my controller. At times the virtual laser pointer froze, forcing me to restart the headset and reconnect. Granted it only happened it a few times I still found it frustrating when it did.

There’s less freedom of movement compared to the Oculus Rift.

There’s also less freedom of movement compared to Oculus Rift, which offers six degrees of freedom. Oculus Go only offers three degrees. It’s the difference between walking in a virtual room and only being able to move your head around. Not a deal breaker, but definitely something to know before purchasing. 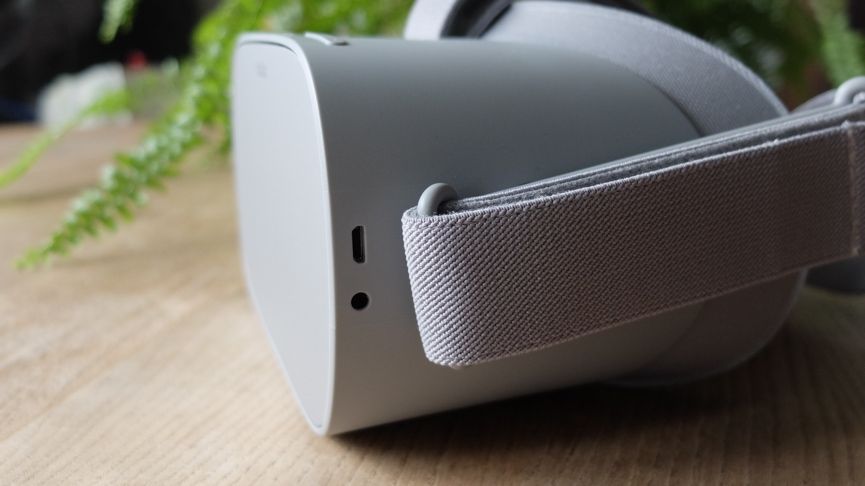 Disappointingly the battery lasts only two hours, maybe a bit more with dimmer brightness settings. This can make watching a full movie in Netflix a challenge. Knocking out a few episodes of a show never presented an issue, but many popular blockbusters that would benefit from being watched in a simulated movie theater will outlast the battery. Even a battery pack won’t save the day since the Oculus Go drains energy faster than it can take in from a charger. Oculus actually recommends not charging the device during usage for this reason.

Games also drain the battery fast, but I found that less of an issue because I never wanted to play a game for two hours. Most of the games available offer lighter mobile experiences, which aren’t bad necessarily just not something to dedicate a lot of time to.

The Oculus Go focuses on entertainment content, which can be found on the Oculus Store. The library of available apps is taken directly from the Samsung Gear VR, which is made in partnership with Oculus so it’s not exactly surprising. I found a lot of the content to be filler rollercoaster thrills and cheaply made apps. Some more travel applications to visit a few museums would’ve been appreciated. That said, a few hidden gems make the offerings worthwhile.

Netflix, as mentioned before, fits right at home on Oculus Go. Educational apps such as Space-Time by PBS and Ocean Rift offer unique ways of immersing you in the information. Even some games popped out. Virtual Reality took me by surprise by creating VR experiences within VR experiences – think Inception. 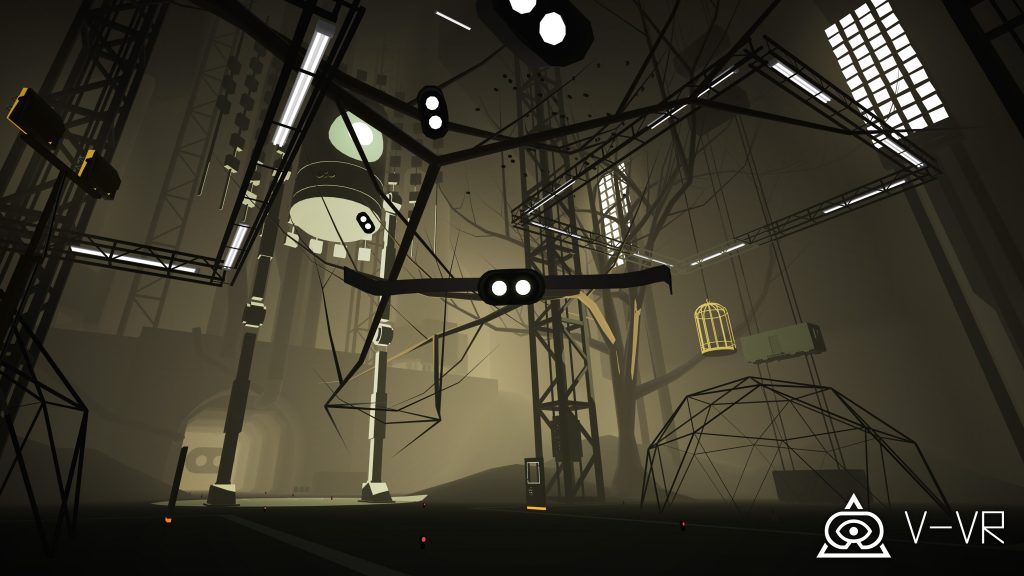 Even some of the social apps were intriguing. Imagine playing a hand of Texas Hold’em and actually being able to see, interact, and converse with the other players. BigScreen VR offers a similar social experience for watching movies in a virtual movie theater.

For a standalone headset priced at only $199, most of these shortcomings can be forgiven. I highly recommend Oculus Go to anyone interested in Virtual Reality that doesn’t plan on playing games. Entertainment experiences are at the forefront what makes this headset fantastic with built-in audio and a higher resolution screen. But for gamers wanting to play a game free of wires, they’ll probably be disappointed. Oculus Rift offers the better experience there.

Facebook and Oculus have a really fantastic product here opening the door to VR for many people unwilling to make the leap into PC-based VR. Oculus Go could be the headset that gets VR into the mainstream by eliminating many hurdles, the price being a primary one. And with time and future upgrades, the Oculus Go line will only get better.