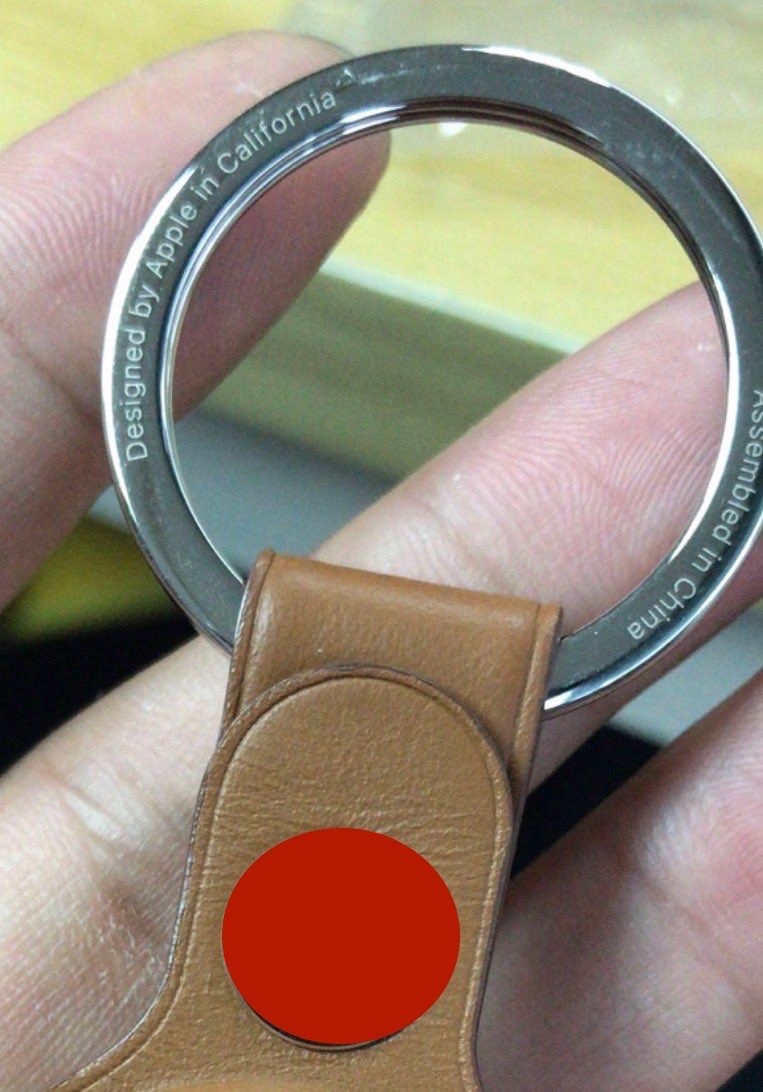 A new leak shows what seems like an AirTag accessory ahead of the Arm Mac Apple event tomorrow.

Leaker Fudge (@choco_bit) on Twitter shared an image of an AirTag accessory. From the looks of it, it seems like a keychain meant to accommodate an AirTag.

It also looks similar to the keychain ring mentioned in a recently unveiled Apple patent covering AirTags. The keychain, furthermore, has the “Designed by Apple in California” and “Manufactured in China” fine print, thereby lending some credibility to the alleged AirTag accessory.

The leather loop in the photo also seems similar to the loop on the MagSafe Leather Sleeve.

It looks surprisingly small, with the ring seemingly having a radius half the size of the person’s finger in the image. However, there is ongoing speculation that Apple will be releasing AirTags in two sizes. It could be that one of them is really that small.

On the other hand, it’s a keychain. China is known for producing mockup iPhones based on rumors and CAD leaks. So I’m guessing it must be pretty easy to build a keychain with text that makes it look like an Apple product. Fudge itself says it in his tweet: “…take it with a bit of salt though since something similar is easily reproducible in China.”

And on the off chance it turns out to be correct, this is what the AirTag-carrying leather keychain may look like. And it sure is going to be overpriced.

Apple is rumored to launch its Tile-like trackers dubbed AirTags alongside iOS 14.3. Apple recently launched iOS 14.2 to the public and Apple could soon open up betas for iOS 14.3. This suggests that the Cupertino company could launch AirTags at its Mac event tomorrow and maybe launch them alongside the public version of iOS 14.3, if rumors are any indication.

AirTags are rumored to be round, disc-shaped devices that sport Apple’s U1 chip for precise location tracking. It is said that using AirTags, users will be able to track down an object to its exact location in a house or elsewhere.