To those who thought the iPad Air 4 may steal the iPad Pro’s thunder, you were wrong. 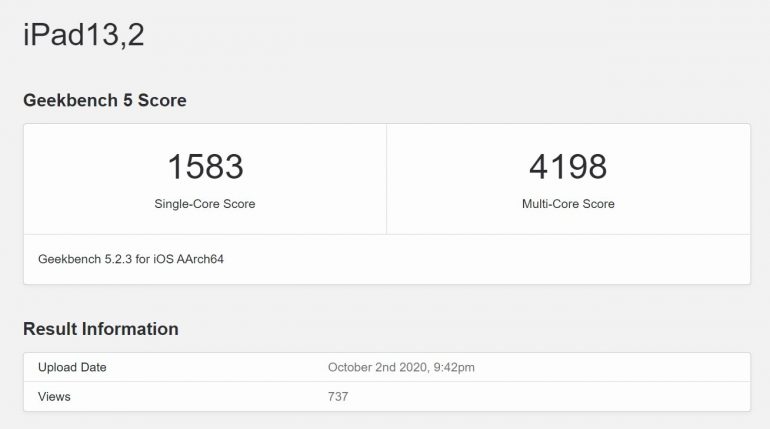 New benchmark results for the A14 Bionic chip in the iPad Air 4 have leaked suggesting an improvement in single-core performance and detriment in multi-core performance.

The new iPad Air 4, which is yet to commence shipping, scored a single-core score of 1583 as compared to the 2020 11-inch iPad Pro’s 1114. The 40% gain doesn’t seem phenomenal when comparing it to a processor that’s based on the A12 chip which is two years old, but it’s considerable and shows the sheer processing power of the new iPad Air. An interesting thing to note here is that the A14 Bionic is clocked in at 2.99GHz as compared to the A12Z, which has a base frequency of 2.48GHz.

These scores were leaked in a Tweet posted by the prolific leaker Ice Universe. These were posted on Geekbench on October 2. Interestingly, these Geekbench 5—a popular benchmarking application and service—scores are from the Cellular + WiFi version of the iPad Air 4, which Apple says is yet to be approved by the FCC and cannot be sold until then; having the code name iPad 13,2 (J308AP).

Multi-core scores, however, is where the iPad Air 4 lags behind the 2020 iPad Pro. This is fair considering the fact that the latter has two extra cores than the former—8 cores vs 6.

What does this mean, though?

Single-core scores are a measure of how long it takes for a single core of a processor to perform a given task. The task is decided by the respective benchmarking application, therefore it may vary depending on what application you use.

That said, most apps that require multi-threading take advantage of the multiple cores in a chip. Now, the efficiency of the cores also partially depends on how well an application is coded to divide multiple threads across multiple cores. You should be able to do just fine with the iPad Air 4. However, it may be comparatively slower performing intensely demanding tasks like editing a 4K video.

Of course, RAM also matters. And the new Geekbench scores for the iPad Air 4 reveal that it sports 4 GB of RAM as opposed to the 6 GB of RAM included in the 11-inch 2020 iPad Pro.

All of this means that people who speculated that the iPad Air would steal the 2020 iPad Pro’s thunder may be wrong. You’d still need an iPad Pro if you are thinking about replacing your computer with an iPad. Of course, real-life performance much differs from benchmark scores and we’ll have to see how the two iPads compare performance-wise when the iPad Air 4 becomes available.

Apple announced the iPad Air 4 at a Sept. 15 event alongside new Apple Watches. It features an iPad Pro-like design with flat edges and houses a fingerprint sensor in the power button as opposed to FaceID on the iPad Pro. The iPad Air 4 will also ship in more colors than the iPad Air.

Ultimately, it is expected that the iPad Air 4 launch is imminent, and our speculation is that it could be as soon as this week, based on a couple of leaks.