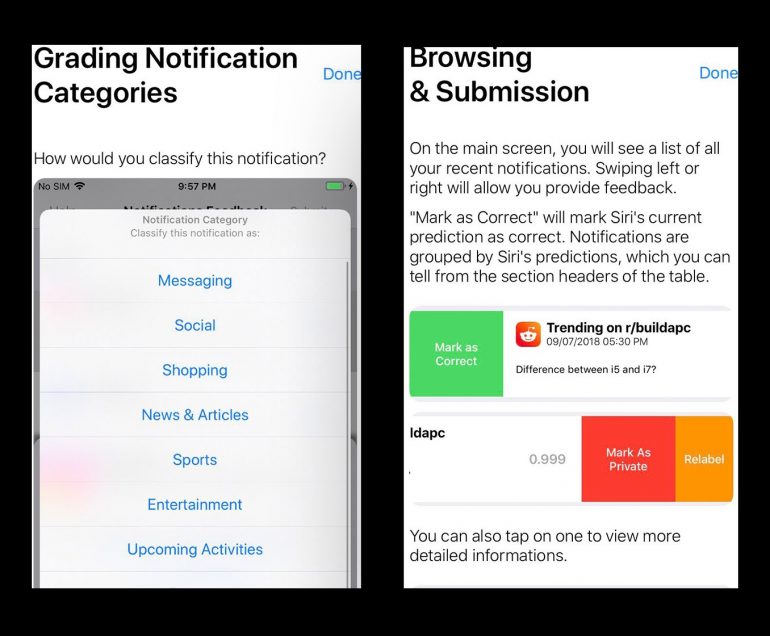 Notifications on iOS are far from perfect. There are many minuscule irregularities and crevices to fill that collectively end up offering a far-from-optimal notification experience.

Although we can’t do much about that, it’s interesting to learn that Apple is actively working towards improving its notification system, according to screenshots of Apple’s internal prototyping tool, shared by Koin on Twitter, that’s used for garnering feedback on how notifications are delivered and ultimately appear on your iPhone.

It’s a prototyping tool used by Apple engineers. That said, there’s no surprise it doesn’t have the finished look and appeal of an iOS app. The app seemingly features a main screen where all the notifications appear—apart from the lock screen—so that testers can provide feedback.

This effort is necessary because Apple uses Siri’s intelligence to prioritize notifications and try to offer them to users in a myriad of convenient ways. It probably helps hone Siri for public release. “Notifications are grouped by Siri’s predictions, which you can tell from the section headers of the table,” according to the tool’s documentation.

The app also lets internal testers at Apple help provide feedback on how they’d like different notifications delivered. The options are: Lock Screen with Sound, Lock Screen Only, Deliver Quietly, and None (Not Graded).

These options, if you haven’t noticed yet, have already been adopted by iOS, for example, when it automatically suggests a particular notification to deliver silently based on the type of notification. Yep, that’s because internal testers had spent some time grading them individually to help Siri learn how to differentiate between the important and the inessential notifications.

Another way testers grade notifications is according to their category. This probably helps Siri decide the importance of the notifications relative to the user.

Koin also shared how internal Apple testers test predictive notifications. On the forefront, these notifications would simply be, say, bedtime reminders with Siri Shortcuts suggestions. For testers, however, the process seems to be quite less interesting and a bit more daunting as they sometimes seemingly need to create demo notifications, filling individual fields of information that would ultimately create a demo notification.

There are also leaked screenshots of the prototype of the new Translate app within iOS 14. Nevertheless, it’s always interesting to learn how stuff that you use every day is created and refined. And with something as dear to me as notifications, it’s all the more precious.