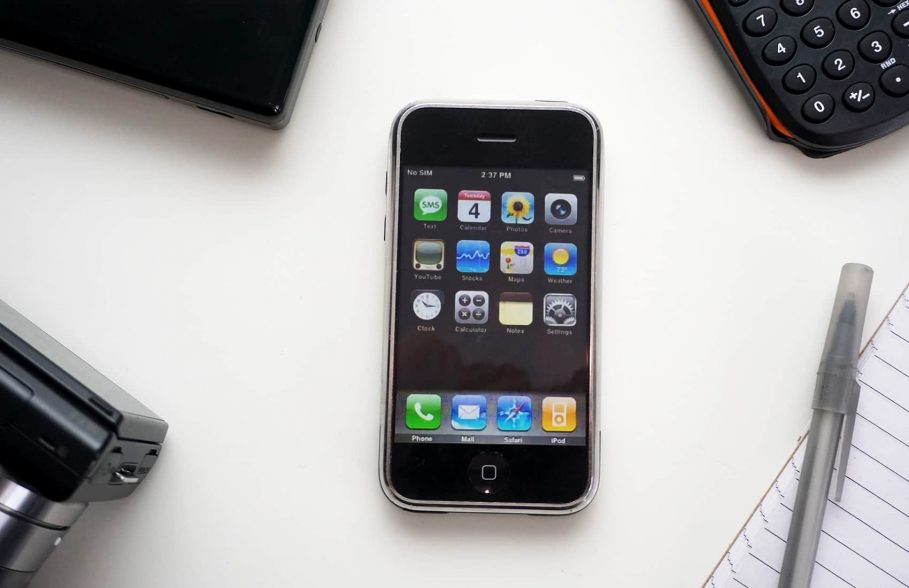 We’ve come a long way since iPhoneOS 1. Apple announced the original iPhone back in 2007, and with it, iPhoneOS. Back then, things were a bit simple. All your iPhone could do was make phone calls, check the weather using the Weather app, SMS your friends, browse the web, play audio and video files, and more.

There were no third-party apps as Apple hadn’t launched the App Store yet. Still, iPhoneOS 1 was considered a revolution when it came to mobile operating systems. It was the first OS that introduced an on-screen touch keyboard; the first one to introduce scrolling, pinching, and panning using your fingers.

In other words, iPhoneOS 1 was special in a lot of ways. Now, developer Alexandre Colucci has shared how Apple’s original iPhone firmware compares against iOS 14 in a blog post.

What did they find?

Well, the bottom line is that the entire iPhone OS 1 firmware is only about the size of iOS 14’s wallpaper set, which includes a total of 66 wallpapers considering both dark mode and regular ones alongside live and dynamic wallpapers. That’s fascinating.

Delving deeper into the comparison, the breakdown of different files, and how much space each file occupies is quite interesting. The original iPhoneOS 1 has a much smaller file system and the biggest component—the one that makes up most space—is…..

Shocking, right! Fonts in iPhoneOS 1 used to take up to 25% of the total space of the operating system. Other components include UIKit, which took up to 13%; wallpapers and ringtones, up to 6%; and interestingly, the springboard only took up roughly 2%. Springboard is the application that manages iOS’ home screen and determines what to load on startup.

Comparing all that with iOS 14, there is only one conclusion to be made: It’s way more complicated.

Despite the base structure being pretty much unchanged, iOS 14, as expected, introduces a bunch of new stuff. Here are the differences as noted by the developer:

Some of the other notable changes include the addition of complex on-device machine learning frameworks involving face detection, vision framework, text detection, etc.

iOS 14 also puts lots of emphasis on photos and videos. That’s expected, considering the new iPhone 12 series brings along a bunch of improvements in camera quality that are vastly a result of Apple’s Image Signal Processor and machine learning smarts. Then, there’s also the additional processing done by the software for features such as Night Mode, ProRAW, HDR video recording in Dolby Vision, and more.

Over the years, Apple has also increased its focus on health, especially now that the Apple Watch is a key product for Apple that the company markets as a health and wellness device more so than a smartwatch. And that is clearly visible in the comparison.

Apple has dedicated a lot of resources to health in iOS over the years that were absent in iPhone OS 1.

Here’s how the treemaps of both operating systems compare when placed side-by-side:

It’s interesting to look back and realize how far we’ve progressed when it comes to smartphones. As they’ve long become a part and parcel of our daily lives and are increasingly growing in importance, smartphones are also getting more complex.

Machine learning and Artificial Intelligence is one of the major technologies that drive these devices today.

While considering how far we’ve progressed, it’s also important to acknowledge the shortcomings of iOS 14. The App Store, though not present in iPhone OS 1, is a prominent component of iOS today. Apple, at the moment, is facing criticism for its alleged anti-competitive practices and arbitrary execution of its App Store policies.

iOS is now also divided into two different operating systems, one for the iPhone (iOS) and another for the iPad (iPadOS), thereby adding to the complexity.

Imagine not being able to use any of the modern new smartphone features that we enjoy today. Imagine going back to a simpler time where the most complex task you could perform on your iPhone was to load a website through Safari. It’s both nostalgic and slightly terrifying.

On iOS 14, the fonts now take up only 6% of the operating system, in case you were wondering.