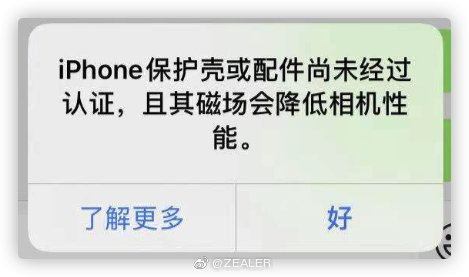 Apple released iOS 14.4 yesterday with a ton of new improvements including specific device identification under Bluetooth settings, camera authenticity warnings, bug fixes, exploit patches, and more. These updates also include a new warning that appears when using your iPhone with third-party cases with magnets.

First reported by DuanRui on Twitter, the prompt states that “The protective case or accessories are not certified, and the magnetic field will reduce the performance of the camera.” It is unclear as of yet if the prompt appears on all iPhones. It’s also unclear exactly which cases fire up this pop up.

Apple, for some time now, already has a support article published warning users of the effect third-party magnetic accessories may have on the iPhone’s camera. However, this is the first time users are met with a prompt. Here’s Apple explaining in detail how external magnets affect camera performance on iPhones:

“Lens-position sensors respond to magnetic fields. If you place a magnet near these sensors, the magnetic field will interfere with or temporarily disable the sensors. This can degrade the sensors’ accuracy and limit the range of movement available to the lenses. The camera will continue to take photos with other means of stabilization but without the benefit of OIS and closed-loop AF.”

Apple says the best way to avoid magnetic interference affecting camera performance is to avoid using “accessories that use magnets or magnetic material.”

iOS 14.4 also includes a repair-related notification that appears when an iPhone is unable to verify if a verified camera is installed.

You can install iOS 14.4 by heading to Settings, General, and then Software update. The update also fixes certain zero-day vulnerabilities, so it is advised to update as soon as possible.