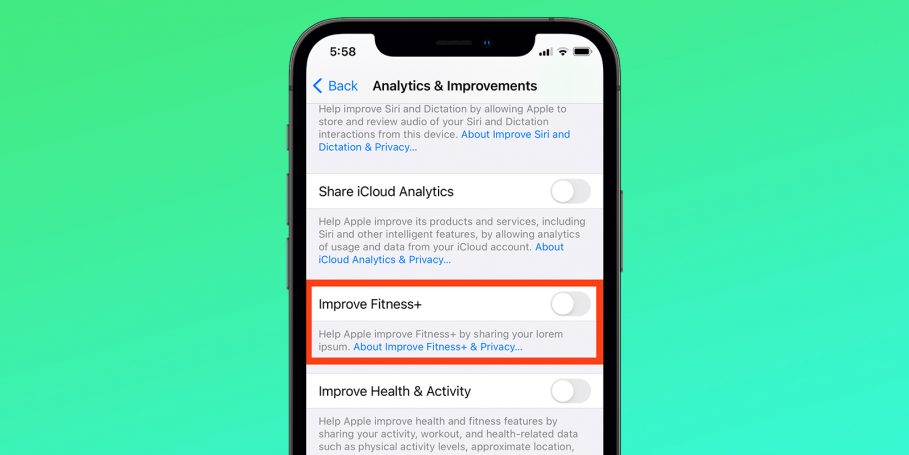 Update: iOS 14.3 Beta 2 is out and Apple has removed the Fitness+ reference.

Apple released iOS 14.3 Beta 1 to developers today. The new beta update brings a lot of new stuff to the table, including references to unreleased Apple products like AirTags and AirPods Studio headphones. One of those references found by The 8-Bit points towards Fitness+, which Apple says is “coming late 2020.”

If you head over to the Settings app while on iOS 14.3, you’ll notice that the Analytics & Improvements section in Privacy settings includes an option to “Improve Fitness+.”

The option contains text below which funnily reads “Help Apple improve Fitness+ by sharing your lorem ipsum.” There’s also a link that seemingly exists to share more information about that particular option. However, the Settings app crashes when you tap on it.

The inclusion of this option within iOS 14.3 Beta 1 suggests that Apple may be looking forward to launching the new service soon; probably alongside the final version of iOS 14.3 which could release by the end of November or the first half of December.

Apple unveiled Fitness+ alongside the Apple Watch Series 6 at its September 15 event. At the event, Apple said that Fitness+ will be “coming late 2020.” It’s a service built around the Apple Watch that will offer a wide variety of guided workouts.

How it works is guided workouts play as video on your iPhone, iPad, or Apple TV while your Apple Watch tracks your activity and displays statistics both on the Apple Watch as well as on whatever device the Fitness+ guided workout video is playing.

There are a bunch of categories that you will be able to choose from including cycling, yoga, HIIT, strength, and core workouts.

Fitness+, when it launches, will cost $9.99 per month or $79.99 per year. It’ll also be included in the Premium Apple One subscription.