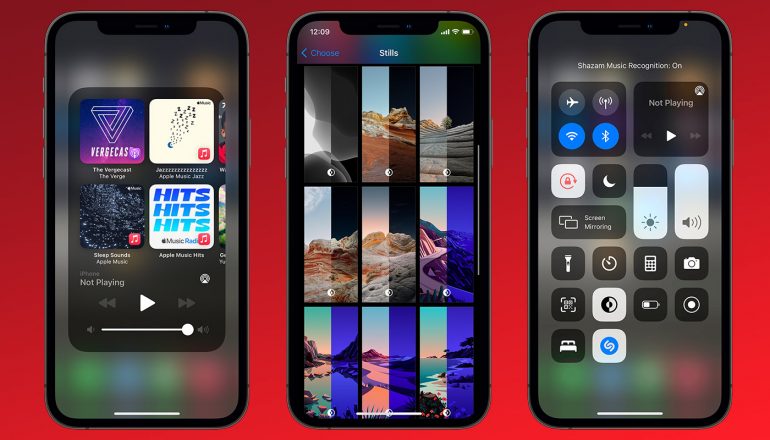 iOS 14.2 and iPadOS 14.2 is now available. After testing the firmware with four Beta versions and a Release Candidate, Apple has finally made it public.

Unlike other incremental iOS and iPadOS upgrades, iOS 14.2 and iPadOS 14.2 ships with considerable improvements. There’s something for everyone: emoji lovers, music lovers, wallpaper junkies… you get it.

The update should appear under Settings – General – Software Update as an over-the-air download. If it doesn’t appear, try again after a few minutes. Sometimes, it takes a while for a new update to roll out to everyone.

That being said, let’s take a look at what’s waiting for you on the other side.

iOS and iPadOS 14.2 comes with a ton of new features that can change the way you interact with your smartphone.

New wallpapers in an incremental update are a rare occurrence. Usually, Apple only releases new wallpapers alongside major releases like iOS 14.0.

Surprisingly, though, Apple has included eight new wallpapers this time that also support the Dark Mode functionality the company debuted in iOS 13. The new wallpapers include landscapes and colorful illustrations. Moreover, each new wallpaper has its own dark version, meaning they switch appearance to better fit with the dark theme of iOS and iPadOS’ interface.

For instance, one of the wallpapers that showcases a rock formation changes from day to night when Dark Mode is enabled. Similarly, the wallpapers featuring illustrations also change from bright elements to darker elements.

Right now, although, these are the only wallpapers (apart from original ones) that support Dark Mode. Hopefully, Apple will expand its library with more such wallpapers going ahead.

Apple acquired the music recognition company Shazam back in 2018 for $400 Million. Before the acquisition, Shazam was available as its own app in the App Store. However, after Apple grabbed it, the company integrated the service into iOS and recently, iPadOS.

Shazam, as a result, was only available within Siri, up until Apple released iOS 14.2 and iPadOS 14.2 today. Now, there’s a new Music Recognition feature available as a toggle within Control Center that you’ll first need to add from the Control Center settings in the Settings app.

Tapping on the Music Recognition toggle will automatically begin listening for a song playing in the background and try to name it. The result will appear as a notification. I think I would’ve liked it better if the Shazam toggle played the signature Shazam animation while in the process of recognizing music.

iOS 14 also comes with an updated music palate within the Control Center. When no music is playing, the Control Center displays music suggestions in the form of album covers arranged in a neat grid. You can scroll through the grid to browse a bevy of suggestions from both the Music app as well as Podcasts.

This new addition is useful when you quickly want to play some Music tailored to your needs. All you need to do is hop over to the Control Center, long press on the music palate and tap on a suggestion.

Emojis are an important part of our daily smartphone usage. And iOS 14.2 adds over 100 new of them. The emojis include a new pinched finger that has been a subject for memes marketing it as the “frustrated Italian hand gesture” emoji.

Apart from that, other emojis include a smiling face with a tear, lungs, Dodo (the extinct bird), an anatomical heart, a disguised face, and much more. You can see the entire list over at Emojipedia.

Today’s update comes with a new People Detection feature that uses the iPhone 12 Pro’s LiDAR scanner to detect people ahead. This is a useful accessory feature for visually disabled people. It enables them to steer clear of people in their way, which is essential while practicing social distancing.

You can access it by opening the Magnifier app by using the new Back Tap feature or by triple-clicking the side button. When a person is detected in close proximity ahead, your iPhone will use a combination of sounds and haptics to alert you. You can customize the sound and haptic options depending on if a person is close or far or at a threshold distance defined by you from the Settings app.

Although, if you are depending on the People Detection feature to guide you at night, note that it won’t work.

Apple held its Time Flies event on September 15. At the event, the Cupertino company announced new Apple Watch and iPad models. One of the announcements included the new Solo loop for the Apple Watch.

It’s a singular loop that does not contain any buckles or connection points. Instead it’s a stretchable band that you can just plop on your wrist, making wearing the band easy and quick.

iOS 14.2 now features an updated Apple Watch app icon that features the new Solo loop instead of the old loop with the buckle. It’s a small change but effectively highlights Apple’s attention to detail.

Apple introduced Optimized Battery Charging for AirPods quitely alongside iOS 14 back in June. However, even though iOS 14 launched en masse, the feature wasn’t available. Today, iOS 14.2 finally includes that.

Optimized Battery charging is an essential charging feature that learns from your charging schedule. It will only charge the AirPods to 80% initially. The rest 20% will fill up some time before you disconnect the AirPods. This procedure preserves battery health in the long run.

Apple first introduced Optimized Battery Charging for the iPhone alongside iOS 13 in 2019.

Headphone audio level notifications have been present in iOS for a long time. However, in the iOS 14.2 update they are renamed to “Headphone Safety” from “Reduce Loud Sounds.”

These notifications notify you if the volume of sound playing through your headphones is too loud that it causes hearing impairment. It’s a handy feature that’s worth having on your iPhone.

Apple announced a new HomePod mini alongside new iPhones at its October 13 event. One of the major announcements regarding HomePod was Intercom, a new communication feature for your home.

Intercom enables multiple HomePods in your home to interact with each other by sending and receiving voice messages. For example, you can send an Intercom message using a HomePod situated in the living room to a HomePod situated in the bedroom. This feature also allows you to send Intercom messages to your HomePods via your other Apple devices including iPhone, Apple Watch, iPad, etc.

While Apple introduced Intercom back in early October, it is only now that the feature is gaining support for the entire ecosystem (Apple launched Intercom with HomePod firmware 14.1). Thanks to iOS 14.2, the new firmware now adds support for the Intercom feature.

iOS 14.2 introduces the ability to connect your HomePod to an Apple TV 4K box to enable stereo, surround sound, and Dolby Atmos Audio. Apple says the sound is best experienced when two HomePods are connected to the Apple TV 4K box together, forming a pair.

It’s worth noting that this feature is only available on the original HomePod and not the upcoming HomePod mini as the latter does not contain adequate hardware to produce surround sound.

These are the devices that support iOS 14.2 and iPadOS 14.2. If your device isn’t listed here, it’s not supported by the new firmware.

As always, every iterative iOS and iPadOS release fixes some bugs that were persistent in the previous version. Although iOS 14.1 fixed some bugs, it also could have let some slide. Worse, it could have introduced new ones. That being said, iOS 14.2 brings along some bux fixes. If you had these issues with your iPhone, rest assured that they will get fixed when you update to iOS 14.2.

iOS 14.2 further refines the iPhone experience by introducing new features and fixing older, problematic ones. It also introduces an interesting roster of new emojis. That being said, it’s definitely worth upgrading.

“iOS 14.2 includes the following improvements for your iPhone: