Here’s what’s new in iOS 14.1 that just got released today 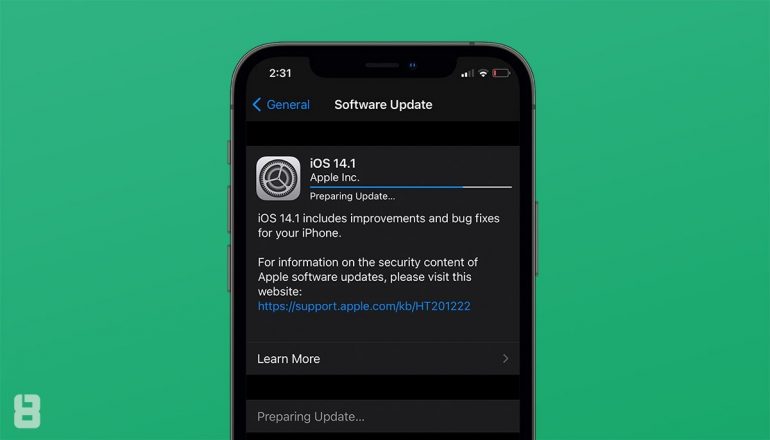 Apple released the next major iteration of its iOS 14 firmware to everyone. The update has arrived almost a month after the original iOS 14 release. While iOS 14 came with a ton of new features including the ability to add widgets to the home screen, iOS 14.1 is a mere bug-fix upgrade.

You can install iOS 14.1 from the Settings app on your iPhone for free. All you need to do is go to the Settings app, tap on General, then Software Update. Your iPhone will automatically search for an update and display it on the screen. You will, furthermore, need to tap on the Install button and agree to Apple’s terms and conditions regarding the update.

How much space will the new update occupy on your iPhone?

iOS 14.1 is an iterative update to iOS 14.0.1. This means that if you had previously updated your iPhone to iOS 14.0.1, the download size for the software update will be smaller for you than those who are only just hopping onto iOS 14. This is because your iPhone also downloads the files that were skipped in the previous upgrade, which, in your case would be iOS 14.

Of course, the file size will also differ depending on what iPhone model you have.

Although iOS 14 was unlike the initial versions of iOS 13 (lots and lots of bugs), it still felt rushed out. Evidently so, it had a few bugs here and there, the most prominent ones being dysfunctional mail aliases in the Apple Mail app and widgets not appearing in their correct sizes.

iOS 14.1 squashes those bugs. Apple’s Release Notes for iOS 14.1 explicitly mentions that the upgrade “includes improvements and bug fixes for your iPhone.” However, if you notice any new or pre-existing bug, do let us know using the comment section right here:

0
Please leave a feedback on thisx

Aside from that, iOS 14.1 also prepares for iPhone 12’s launch, which is on October 23. The new iPhones will ship with this firmware version pre-installed. It contains support for 10-bit HDR video playback and editing, which sets the precedent for the iPhone 12’s Dolby Vision video capturing capabilities.

A lot of these bug fixes aren’t crucial, just some UI mishaps. However, some fixes do help improve connectivity and user experience. Here’s the entire list according to Apple’s release notes:

Well, hold your horses. iOS 14.1 has just been released, and while you were looking for some new features, you may be disappointed. But it’s still early. Just today, Apple launched iOS 14.2 Beta 4 to developers. So, you can expect some time before Apple makes iOS 14.2 public.

iOS 14.2 carries a new feature that allows you to add a Shazam toggle to the Control Center, using which you can make your iPhone recognize songs for you. The feature list isn’t final yet, given that it’s still in Beta. It is possible that Apple removes some features as well as add new ones ahead of a public release.