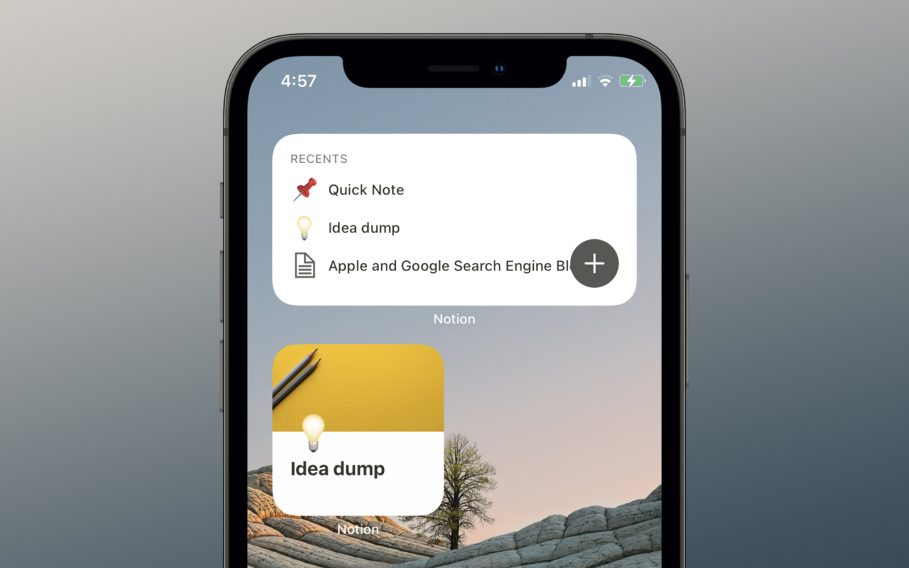 Notion is a note-taking app that has risen to immense popularity. If you’ve ever searched Google for the term “best note-taking apps,” you might have noticed that Notion is mentioned everywhere.

Part of Notion’s appeal comes from its ability to pack in a bevy of different stuff including database support, the ability to create wikis, content calendars, theming support, and more. And it lets you do all that while maintaining a level of simplicity in its design so that you don’t get overwhelmed easily.

As if that wasn’t enough, Notion has now added support for home screen widgets on iOS 14. This means that you will be able to perform certain tasks quicker and more efficiently, boosting your productivity.

The support is introduced in Notion’s app version 1.7.2.

Apple announced home screen widget support with iOS 14, the latest iteration of its iPhone operating system. It was a welcome change for everyone, and a lot of developers were quick on their toes to include support for the home screen widgets. Months later, it’s good to see Notion finally hop on board.

Home screen widgets on iOS 14 are simple: they act as quick action points for functions within an app. You cannot, for example, tap on the Reminder widget to add a new reminder right within the widget. Tapping on the widget will open the corresponding section in the app that the widget represents.

Having said that, let’s learn how to add Notion’s widgets to the home screen on iOS 14.

Notion is offering multiple widgets all letting you quickly access different parts of the app. There’s a 2×2 widget that lets you preselect a page and jump to it quickly by tapping the widget on the home screen. Then there are two widgets for showcasing your favorite pages and another two for pages you’ve recently visited.

Notion is a great tool for enhancing your productivity. If you already have a workflow set up that involves using Notion, iOS 14’s home screen widgets will make accessing Notion even faster.

That’s certainly the case for me. I’ve been using Notion for a long time now. My primary workflow involves maintaining a content calendar for The 8-Bit and noting down any post ideas that come across me. Often, ideas just brush past my mind and it’s extremely crucial that I write them down somewhere in order to not forget them (forgive me, I’ve got a memory of a goldfish).

Although, the process of opening Notion and then navigating to the page I dump all my ideas to involves a few steps, which is not healthy for the integrity of my ideas. I end up writing down a slightly modified version of what had initially popped into my mind.

Notion’s widgets solve that problem. I can now easily tap on the widget to directly jump to my “Ideas Dump” page. And any other pages that I need to jump to.

Notion is a pretty useful tool for workflows both intense and mellow. It makes you productive by helping you efficiently manage your schedule, tasks, reminders, and even acts as a personal blog.

Speed and time are important aspects when it comes to productivity. Even though you may pass it off as a little bump in convenience, but Notion’s home screen widgets for iOS 14 contribute to a considerably faster workflow initiation, which is essential to your productivity as a whole.