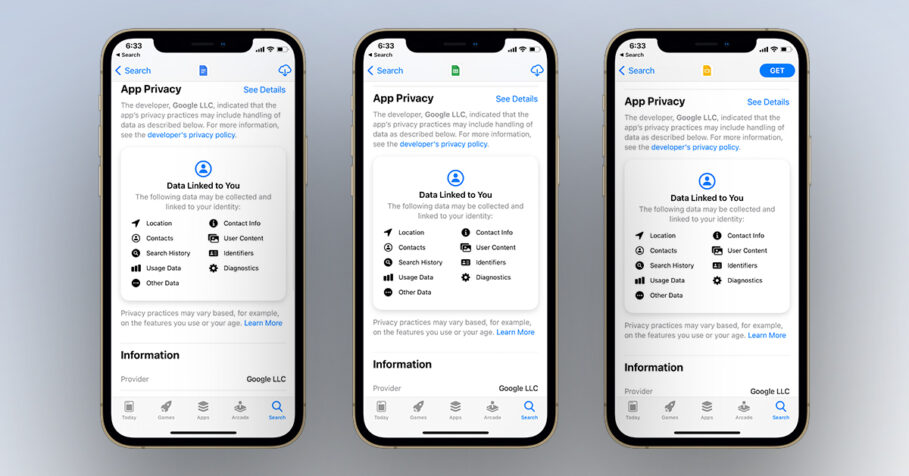 After almost a couple of months of hiatus, Google has finally begun adding App Store Privacy labels to its apps. The Gmail app got its own earlier this week. And today, Google Docs, Google Sheets, and Google Slides apps have updated them.

These apps’ privacy labels enlist data such as location, contact info, search history, identifiers, and more which is the regular set of privacy labels for Google’s apps.

Similar to how Gmail was updated, Google has updated the privacy labels on its productivity apps suite without updating the apps themselves. Google Docs and Google Sheets were last updated on 7 December, while Google Slides was last updated on 14 December.

The company also told TechCrunch that all its apps on iOS would receive App Store Privacy labels in January. January has come and gone, but a large number of its apps are yet to be updated with that information including popular apps like Google Chrome, Google Photos, and Google Maps.

Some Google apps including Gmail and the Google productivity suite now feature updated Privacy Labels but the apps themselves haven’t received updates since December.

Other Google apps such as YouTube Music, Google Translate, YouTube TV, and Google Tasks have been updated with minor improvements and bug fixes.

Apple introduced its App Store Privacy labels as a part of iOS 14 at its WWDC 2020 conference in June and started enforcing them in December.

Ever since the privacy labels were enforced, Google, which is known for updating its iOS apps on a weekly basis, stopped updating them altogether to avoid disclosing its app tracking practices. In the meanwhile, Google’s apps on Android continued to receive regular updates.

The App Store Privacy labels disclose what data an app tracks and links it to a user’s identity. It’s a part of Apple’s renewed privacy push.

Alongside Privacy labels, Apple also introduced App Tracking Transparency prompts within apps which offer the user a choice to decide whether they want an app to track themselves across other apps using an identifier.

Google’s productivity trio—Google Docs, Sheets, and Slides—are some of Google’s smaller apps. It’s major apps such as Google Chrome, Google Photos, and Google Maps are yet to be updated with App Store privacy labels.

However, it seems that the company is gradually adding those to its apps and it won’t be too long before other major Google apps receive their own Privacy labels.