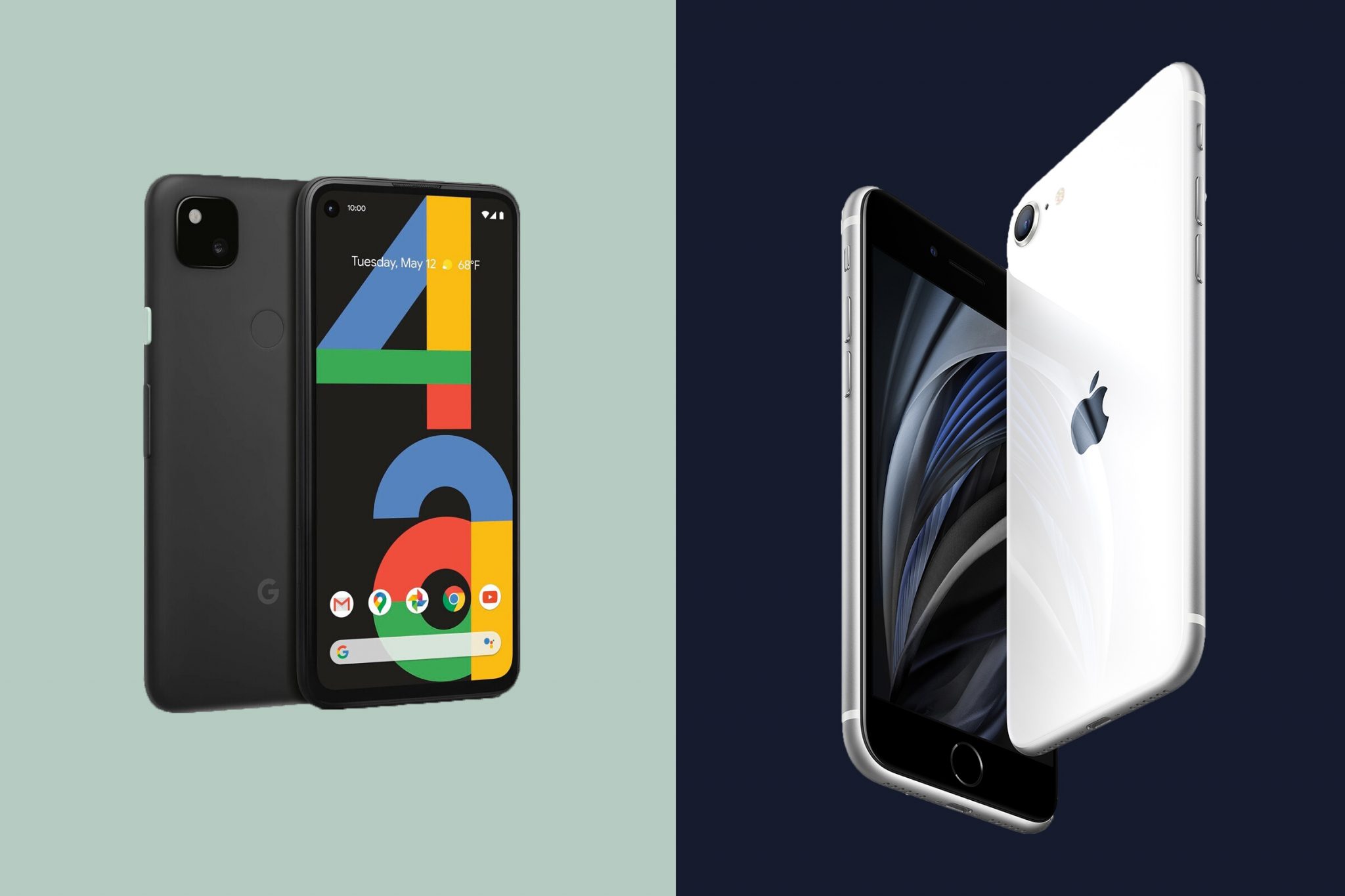 Apple’s one of the most popular models of the iPhone yet includes the 1st Gen iPhone SE. It was handy, stylish, and just had the perfect amount of swag. It’s popularity paved the way for the new iPhone SE 2020. The best part about it is that other than some specs, the design and display has not been interfered with, those features being the most loved.

And then there is Google’s Pixel 4a. Stylish, fresh, and just the best of Google. It’s better than its previous models as not only is it cheaper than them but has advanced features as well.

Let’s dive into these phones in detail and see which one comes on top.

When we talk about iPhone SE, in front, it has gigantic bezels with a small display, which makes it a little less modern than the 4a, after all, retains the same design as the iPhone 6, 6s, 7 and 8. It has a glass body which makes it less prone to scratches as well as gives the user a sense of luxury. The camera bump looks nice with a single circle surrounded by an aluminum ring. It is available in 3 colors.

The Pixel 4a on the other hand has a more attractive front when compared to the SE. It has relatively slim and uniform bezels all around thanks to its hole-punch camera, an extremely compact and light frame, and classy all-black exterior.

Even with a far-bigger display, the Pixel 4a has very similar dimensions and weight as the SE. Where it loses from SE is when you flip the phone around. It has a plastic back, the camera array looks unnecessary and it’s just available in one color, black.

Along with the iPhone SE’s outdated design comes an outdated display. Nearly every other phone has better screen specs, and the Pixel 4a is no exception. The Pixel 4a also supports HDR, 10,000:1 super contrast ratio, and of course, the true blacks of OLED displays. The iPhone SE’s screen is probably the best LCD ever made for a smartphone, but it can’t hold a candle—or even a high-res photo of a candle—to the Pixel 4a.

But that’s only because of Apple’s choice to run along with an IPS LCD screen. OLED displays are technically better than LCDs by design and functionality. Taha has compared both technologies in his article here.

The refresh rate in both phones is 60 Hz.

This is one feature that may act as a big advantage for Google’s Pixel 4a.

Pixel 4a is available at $349 with 6GB RAM and 128GB storage. The prices for India are yet to be announced.

You may be tilting towards the Pixel 4a but there’s more to it. Even though to get the same specs as the Pixel 4a in the iPhone SE, you will have to pay $100 extra, it covers it up with its processor.

Google Pixel 4a is powered by the Qualcomm Snapdragon 730G processor. It runs the Android 10 operating system which will be upgraded to Android 11 as and when Google rolls out the update.

Apple iPhone SE is powered by the most powerful chipset the company has to offer, the A13 Bionic chipset, which is the same chipset that powers the iPhone 11 lineup of devices. It is available in 64GB, 128GB and 256GB storage variants. The device runs the company’s own iOS 13.5.1 operating system. Apple doesn’t play the spec sheet game with its phones, but the iPhone SE is one of the speediest phones around.

The Google Pixel 4a sports a single camera setup on the back consisting of a 12MP wide-angle lens. On the front, it features an 8MP wide-angle selfie camera with an 84-degree field of view. Google has loaded the phone with some high-end camera software features, including support for Night Side with astrophotography, so you can take some great pictures of the night sky. The rear camera can shoot videos in 4k at 30/60/240fps.

While both phones support portrait mode with depth control, HDR, and excellent zoom up to 5X even without a proper telephoto lens, the Pixel 4a is the superior performer, with a slew of premium features that you won’t find on the SE, at least not without third-party apps. Features like Night Mode, which is stellar on the iPhone 11 but completely absent from the SE. There’s also astrophotography, which lets you take pictures of stars with the aid of a tripod, as well as dual exposure controls for adjusting highlights and shadows.

On paper, Pixel 4a definitely is a little better in terms of the camera than iPhone SE.

The Pixel 4a is backed by a 3,140mAh battery with support for 18W fast charging. Google says the Pixel 4a will last up to 24 hours “based on a mix of talk, data, standby, and use of other features” (down from the 30 hours in the Pixel 3a).

The iPhone SE 2020 is backed by a comparatively smaller 1,821mAh battery, with support for 18W fast charging. Apple claims you can get up to 14 hours of talk, 12 hours of internet, and 12 days of standby. So the two phones will likely both last you through a full day before they need to be charged.

However, battery life was our biggest complaint with the iPhone SE, which has a paltry 1,821 mAh cell inside and gives you less wiggle room to push hard with games and media without a mid-afternoon top-up. But to overshadow that is their wireless charging feature which is carried forward from iPhone 8. Pixel 4a does not have this feature.

The first major factor is loyalty. We are all fighting the war between Android and Apple and no matter the specs or features, mostly we reside with our trusted team. The people who have been using Android need some major change to shift to Apple and vice versa.

And that’s why if a Google user looks at this debate, Pixel 4a is a clear choice. It is available at a good price, modern display, and a great camera. But then if you are loyal to Apple, you will know that even though the features and specs on paper may look weak, the phone has an amazing processor, its fast, as well as the picture quality, is great.

Another aspect of it is the complementary products from the brand. If you own an Apple phone, you tend to look at the variety of products that the brand is presenting. Apple Watch and the Airpods are quite popular and one won’t use them with an Android phone, duh. So in such a case, the iPhone is an easy winner. Users will also be vouching for iPhone SE due to its history. It is a repacked and upgraded version of an old product that was loved for its design and features. Many users found the later iPhones tough to handle and wanted the old design back.

Pixel 4a on the other hand does come with its own complementary products like the Pixel buds but they aren’t as popular. Also, 4a is definitely an upgrade but as it is available at a cheaper price, the body used is plastic and the processor is a downgrade too. Yet this is the best that Google has to offer at this price range, and that is enough for the Android fans out there.

Pixel 4a and iPhone SE, both are very popular phones in the market right now. Due to its cheaper price, Pixel 4a is attracting more customers. Google has produced a coming of age phone but it still lacks some key features and similarly, the new iPhone SE is a loved phone but can use some improvements.

Both brands are pressuring each other to come up with the best upgrades in the next models of this series. Which one to choose between these two? Do you go for the cheaper price in this modern Google phone, or do you go for the traditional beauty with a quality processor by Apple, do let us know in the comment section.