Facebook app on iOS to get dark mode, as per screenshots 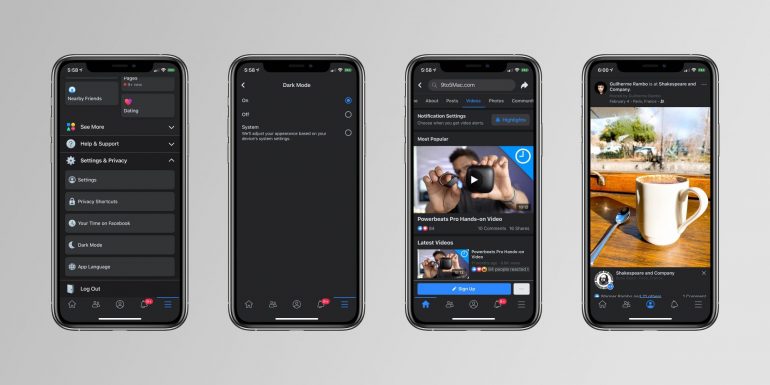 Facebook is working on bringing dark mode to its app for iOS users according to new screenshots that have emerged.

WABetaInfo initially enabled the dark mode interface on Facebook’s iOS app and has shared the screenshots on the website.

The feature is still under development, so it evidently seems. Judging from the screenshots, dark mode in Facebook’s iOS app isn’t actually dark. Instead, it adopts a dark gray shade, which is unlike the traditional iOS 13 dark mode.

Moreover, certain elements like the Facebook logo and other icons are turned white to better match the dark interface. It seems that once the feature is publicly released, you will be able to toggle the dark mode from within the Facebook app’s settings itself. You will also, however, be able to enable dark mode in the app using iOS 13’s native dark mode toggle. This will enable the scheduling of dark mode based on the time of the day possible.

Facebook’s plans to roll out this feature to iOS users are unknown. The app is still under development and it has been believed to be so since the first half of 2019.

Apple introduced dark mode natively with iOS 13 last year. Since then, developers have been updating their applications with dark mode support in order to provide a unified experience for users. Facebook is just the latest developer to board the train with its iOS app gaining dark mode support. Its other apps–Instagram and Messenger–already support dark mode which, you may say, feels realistic, unlike what Facebook’s iOS app screenshots suggest.

The hype around dark mode exists in part because of its aesthetic appeal but also because in OLED screens like the premium iPhone X-11 Pro lineup, enabling a dark mode (which is truly dark) saves battery life as it shuts off individual pixels in black backgrounds; thereby saving battery.

More or less, this feature was long overdue in Facebook’s iOS app, especially since other apps that the company owns already support dark mode.

What are your thoughts on Facebook’s screenshots? Comment below!