Belkin’s Boost Up Wireless Charging Dock is available on Amazon for $20 off!

Can't "stand" to let it slip off my fingers! 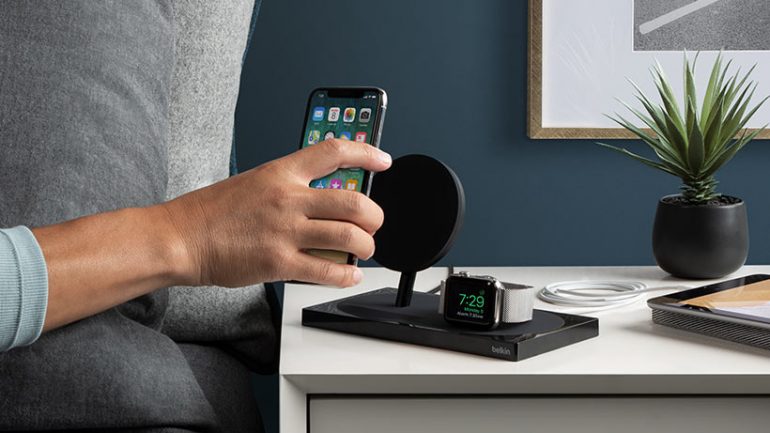 Belkin’s Boost Up Wireless Charging Dock is available on Amazon for $119.99 which is $20 off its original price of $139.99. Click here to check out the deal!

Indulging into Apple’s ecosystem is great, but sometimes it also can be a bit messy. You need to handle and maintain a host of devices every day that you might use on a regular basis. And plugging each of them individually with wires could be a daunting task.

Belkin solves that problem with its Boost Up Wireless Charging Stand. If you haven’t learned yet, Belkin has a fantastic reputation when it comes to offering great accessories for Apple devices. This one isn’t any different.

Belkin boasts that it offers the fastest possible wireless charging speed for Qi-enabled iPhones at 7.5W and Apple Watch at 5W. That’s quite fast for a wireless charger.

Designwise, it’s quite attractive. Its elegance lies in its simplicity. However, the design does feel like it could have been a little sleeker. It comes in two colors–black and white. However, I suggest you consider the piece of furniture that you are ultimately going to rest this stand on before deciding on which color to choose.

One of its drawbacks is that it kind of hums a little while charging an iPhone wirelessly. It’s not that loud and you won’t even notice it most times.

Another drawback is that even though Belkin touts that its wireless charger on this stand is the fastest wireless charger, the additional USB-A output is not that powerful. It will work out for you just fine if you charge your AirPods using it. Albeit, charging an iPad using that port could mean you’ll have to wait for more than usual for it to complete charging.

Best HomeKit Wallpaper Packs to spruce up the Home app on your iPhone!

Even with these nonchalant drawbacks, this stand is the best you can get for your Apple devices.

And the best part is, it’s discounted right now. That means you need to grab it as soon as you can.