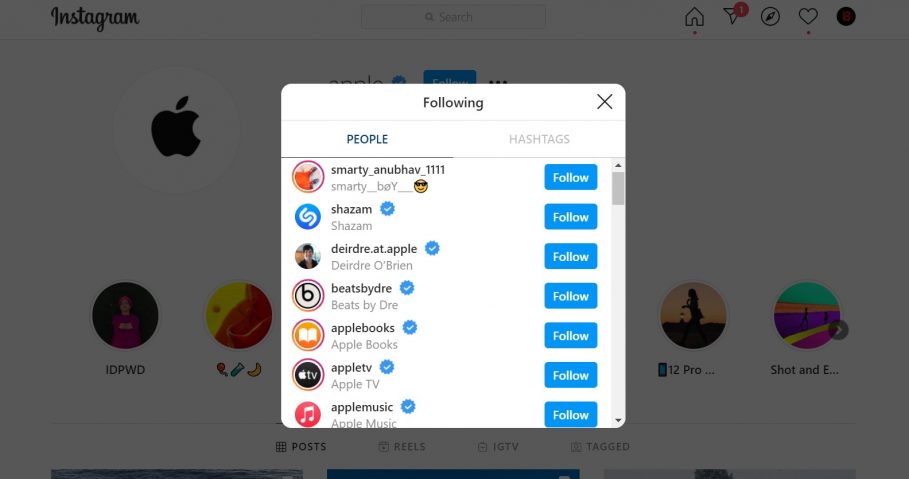 If you are a longtime Apple fan or even a keen observer, you’d have noticed by now that Apple likes to keep it low on social media. A prime example is the company’s Twitter handle. It has 5M followers but not a single tweet.

Things are greener on Instagram. Although Apple mainly uses its Instagram handle to conduct ShotOniPhone contests and feature winners, the company has never shared product images to its 25M followers on the platform despite being the company most well-known for its marketing tactics.

That said, Apple’s Instagram account, as of this writing, follows seven other accounts, most of which are accounts of Apple’s own services, the senior vice president of retail Deirdre O’Brien, and….. an Indian dude that goes by the handle “smarty_anubhav_1111.”

The account itself seems relatively new containing only two posts so far, the first one being posted six days ago. His profile bio is objectively filled with clichés, and there is no indication whatsoever of any kind of his formal or informal connection with Apple. And surprisingly enough, since his account is the only one that Apple follows on Instagram outside of Apple’s own.

Update 1: The account has apparently changed the username and profile image.

Update 2: Apple seems to have finally gotten rid of the account.

The question here is, how did he manage to get Apple to follow himself. And the only explanation that comes to mind is that he somehow managed to hack Apple’s Instagram handle and followed himself. On the other hand, his account only follows Apple.

We’ve reached out to the account handler for comment via DMs and we’ll update this article as soon as we receive a response. Apple is currently closed for business until 5th January 2021 and couldn’t comment, which makes today’s mysterious event even more mysterious.

Apple is notoriously well-known for maintaining a low-profile on its social media platforms, while other manufacturers tend to flaunt their marketing prowess on such platforms.