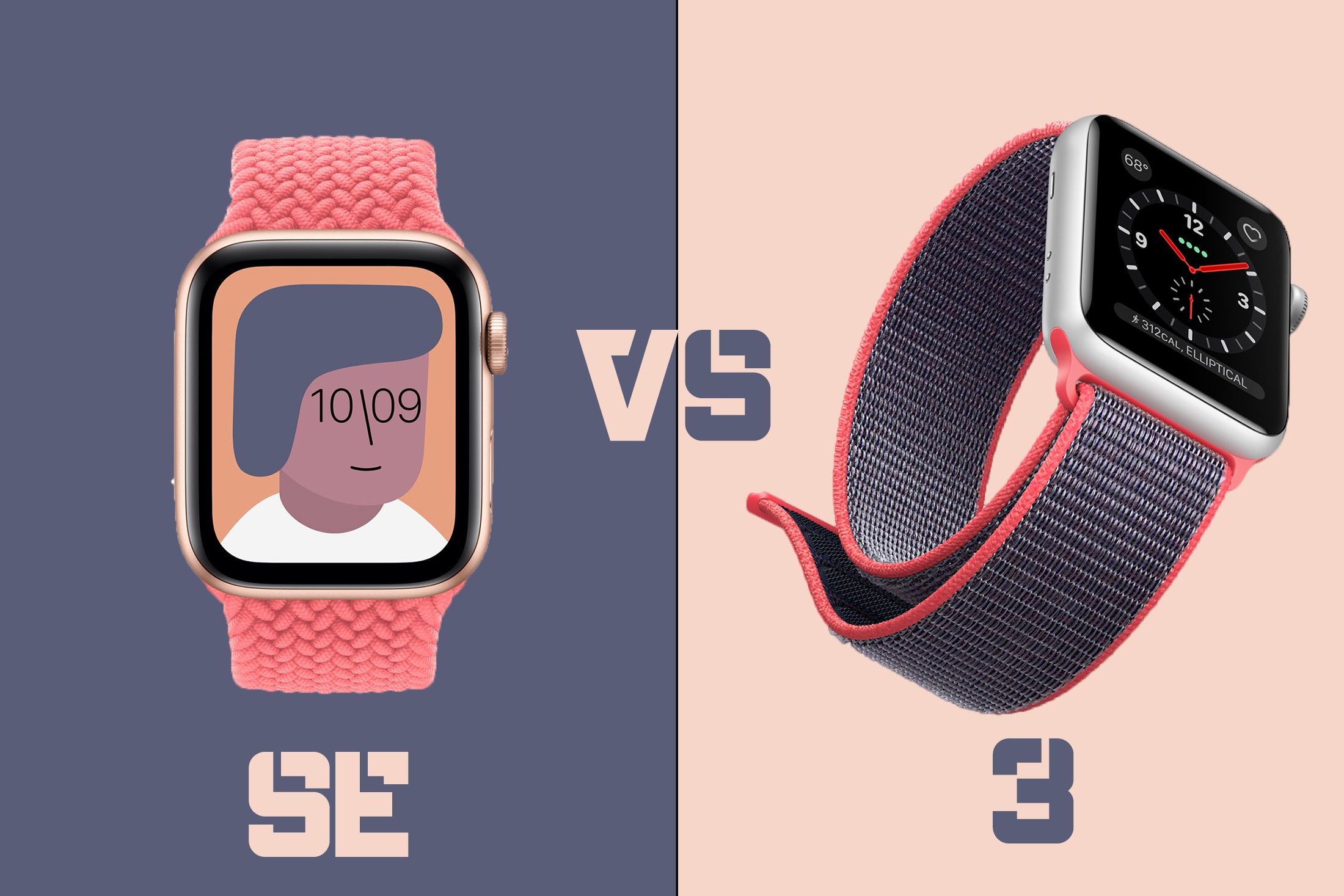 Although the Series 3 is the cheapest, you'd rather want to look out for the upgrade!

Apple recently launched a new low-cost upgrade to the Apple Watch Series 3—dubbed the Apple Watch SE. I thought Apple would discontinue selling the Series 3 after it announces new watches. However, in a surprise move, it seems Apple is continuing to sell it alongside the new budget Apple Watch SE.

Both Apple Watches are great options for people who want a smartwatch. The new Apple Watch SE has the same form factor as the premium Series 6 and costs $120 less. The Apple Watch Series 3 is a relatively old watch and has an outdated design, but offers most of the features you would look for in a basic smartwatch at $200 less than the Series 6.

Having said that, if you are confused as to what Apple Watch you should get your hands on, read along as I compare both watches in-depth.

When it comes to choosing what goes on your wrist, design matters a lot. Apple Watches have always had a distinctive pebble-shaped design that sets them apart from the rest of the industry. While companies like Samsung and Fossil stick to rounded dials for their smartwatches, Apple prefers to gain market dominance by following a curved square design.

It’s interesting as to why smartwatches with a square-like design fare much better than rounded options, especially since watches with rounded dials have been the norm since the very advent of wristwatches. It has to do with how much you can fit in a smartwatch. Square-like smartwatches can fit hardware components inside more efficiently than rounded ones. Plus, it’s just easier to interact with a smartwatch’s interface when it features more screen real estate, which is physically only possible with squared displays.

These considerations also apply to our comparison here. The Apple Watch SE and the Series 3 both have a similar form factor. However, the SE stretches the display a bit up to the corners, which means that you get more screen real-estate. And it accounts for all the difference. The SE, since it has the same design as the Series 4, which I own, is much more fun as well as convenient to use as opposed to the Series 3.

Moreover, it’s not just about the screen. A watch is also seen as a fashion accessory apart from a mere utility. That’s why people tend to spend thousands of dollars on premium watches like Cartier and Rolex. So, when you’re choosing an Apple Watch, it’s important to consider how it might end up looking on your wrist before buying it.

Thanks to Apple, nearly all the bands that fit the SE will also fit the Series 3, except for the new Solo Loop and the Braided Solo Loop options. This is because Apple sells these according to the size of your wrist. And an option for Series 3 doesn’t exist in the size options while checking out for these bands at Apple’s website. However, you can technically attach a Solo Loop to a Series 3, but you will likely struggle with size.

All other band options work just as fine with both watch models.

If you want a Gold Apple Watch, you’ve got no option than to go buy the Apple Watch SE. Now, I can’t objectively recommend a fit and finish for you. But speaking for myself, I prefer the overall appearance of the Apple Watch SE over the Series 3; only because of its larger display and its bigger size that not only makes it look good on my wrist but also is much easier to interact with.

What makes a smartwatch smart is the extended functionalities it offers apart from simply showing time. It’s supposed to decrease your interactivity with your phone and make it easy to respond to messages and notifications when it’s not within imminent reach.

That said, the features in a smartwatch are all that matter. And the Apple Watch has all the features you’d expect in a smartwatch. It lets you respond to messages quickly from your wrist, track your heart rate and exercises, listen to music, and use any essential service that you’d use on your phone without even accessing it.

The Apple Watch SE, when compared to the Apple Watch Series 6, doesn’t support blood oxygen tracking or ECG. It also doesn’t have an Always-on Display, Apple’s proprietary U1 Chip, and 5GHz WiFi. However, it does support fall detection, international emergency calling, noise monitoring, and a compass.

Both Apple watches, however, offer up to 50 meters of water resistance, meaning you can wear your watch into a swimming pool or while surfing or even in the shower.

Software is just as important as hardware when it comes to using an Apple Watch. That said, both watches support watchOS 7—the latest Apple Watch operating system. watchOS 7 brings a lot of new cool features including Sleep Tracking, the ability to share Watch Faces, new workouts within the Workouts app, and much more. While the Apple Watch SE supports all of the new features that watchOS 7 introduces, the Series 3 does not.

It does not get new Watch Faces that are occasionally added to newer watch models. For instance, the Series 3 does not support any new watch faces that were announced in the Apple Watch unveiling except for the Artist Watch Face.

The Apple Watch Series 3 also doesn’t support the new Handwashing feature in watchOS 7. How it works is this way: when you start washing your hands, the Apple Watch hears for the sound of the running water and detects your hand movements to commence a 20-second timer that’s animated using bubbles. It also alerts you if you stop washing your hands before the timer ends.

Both Apples Watches, moreover, come in a GPS + Cellular configuration that lets you use your watch normally even when you are away from your phone.

When it comes to buying new Apple products, longevity is almost never a problem. Apple is popularly known for offering years of software updates and support for its devices. And that holds true even for the Apple Watch.

Having said that, since the Apple Watch SE is new, it has years before Apple ends support. However, the Apple Watch Series 3 launched back in 2017 and so it’s likely that Apple may end support for it in a year or two. Unlike an iPhone, an Apple Watch renders completely useless once Apple stops supporting it with its latest operating system since the watch needs to be on an equivalent operating system as the iPhone to stay paired.

Both Apple Watches fall into the low-cost smartwatch category. While they cost cheap as compared to flagship Apple Watches, they aren’t the cheapest smartwatches in the market. The Apple Watch SE costs starting $279 for the GPS-only version while the Series 3 costs $199. Both models offer a GPS + Cellular version at an additional cost of $50. The new Apple Watch SE is also available to preorder through Apple and BestBuy.

While the Series 3 is $200 cheaper than the Apple Watch Series 6, it’s also as much incapable of supporting updates in the future. Not only in terms of futureproofing, but Series 3 also has a slower processor than the Apple Watch SE, which ultimately leads to missing out on a lot of new features like the compass, noise monitoring, and handwashing detection.

At the same time, the Apple Watch SE offers a larger screen, which is a Godsend when it comes to interacting with your Apple Watch, fall detection, and much more atop basic workout tracking features.

So, the only valid explanation for buying a Series 3 right now is that it’s cheap and a decent option for people who simply want to view and respond to messages and track basic workouts from their wrist. If you don’t care about the added health features, the new watch faces, and faster performance, and instead just want a functioning smartwatch, Series 3 will be your bud.

Lastly, I would like to add that if you’ve got the amount of money to spare on a new Apple Watch SE ($279), buy it. But if you can’t spend that much and want an Apple Watch anyway, you can opt for the Series 3.