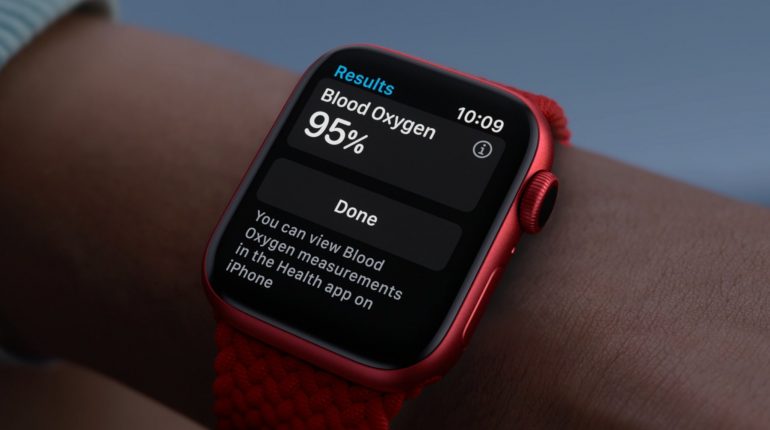 The new Apple Watch Series 6 features new colors and supports blood oxygen tracking for the first time. This feature was highly rumored and is certainly the tentpole feature of the Series 6. Blood oxygen tracking tracks the saturation level of one’s blood using a pulse oximeter. It could be a dangerous sign if blood oxygen levels dip or inflate below or above a certain level respectively. This will push the Apple Watch further into the world of health-centric wearables.

The display on the new Series 6 has also been updated to sustain increased brightness for the Always-on Display.

The Apple Watch Series 6 also supports fast charging to finally enhance Sleep Tracking that was enabled in watchOS 7. With fast charging, you’ll be able to quickly charge your Apple Watch after a full night’s use and before heading off to work.

There isn’t much improvement in terms of battery life. However, the Series 6 features an S6 processor that is based on Apple’s A13 processor used in the iPhone 11. It also features Apple’s U1 chip that’s present in the current iPhone 11 lineup.

The Apple Watch Series 6 comes in a new blue color as well. Moreover, the existing colors have also been slightly tweaked to look different—classic gold stainless steel, a graphite stainless steel, and a Product Red model. The Series 6 also comes with a new Solo Loop and a Braided Solo Loop band that is stretchable so you won’t have to adjust it. It will be available in five colors along with five new Nike Sport bands as well.

The Apple Watch Series 6 won’t feature a USB power adapter in the box for environmental reasons. Apple has also released a budget Apple Watch dubbed the Apple Watch SE alongside the Series 6.