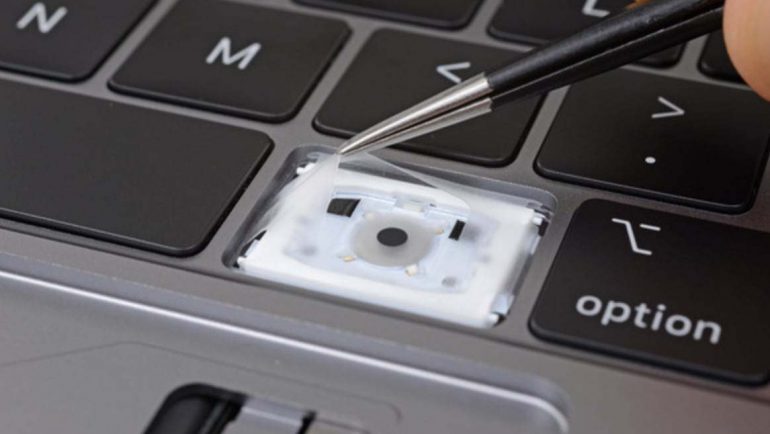 The new versions of MacBook are here with upgraded internals and a mysteriously equipped keyboard. However, we do have an insight on it now, courtesy of iFixit. The tech giant has added a silicone padding below the keyboard keys to reduce noise produced, but, this statement seems like an indirect take to unobtrusively hide the fix.

The keyboard keys on the new Macs (2018) now produce less noise when clicked, and this is due to the fact that Apple has added silicone padding under the keys. “This flexible enclosure is quite obviously an ingress-proofing measure to prevent the mechanism from seizing up under the brutal onslaught of microscopic dust, ” iFixit reports. An enjoyable fact here is that Apple has patented a mechanism in the past that “prevents and/or alleviates contaminant ingress.” In accordance with the patent, “a keyboard assembly including a substrate, a key cap, a movement mechanism, and a guard structure coupled to the keycap” could prevent foreign particles from entering below the keys and inhibiting its mechanism.

Apple could be denying the fix as it implies that Apple had a problem with its Mac Keyboard keys in the first place.

This tiny update, according to Apple, comes in as a provision to reduce sound produced from keyboards. However, there’s a high chance Apple might be outright misleading customers with partially fake marketing. And the fact that Apple suffered from various lawsuits regarding totaled keyboard keys by the invasion of just a speck of dust, supports the fact that Apple might have included this new mechanism to fix the issue, and the reduced sound it produces came as a side effect. Although, when asked about it by The Verge, Apple said that the new mechanism isn’t there to fix the “dust-in-the-keyboard” issue.

Additionally, Apple could be denying the fix as it implies that Apple had a problem with its Mac Keyboard keys in the first place. And the tech giant wouldn’t want to show that, as it could take a hit on its reputation followed by a dozen lawsuits.